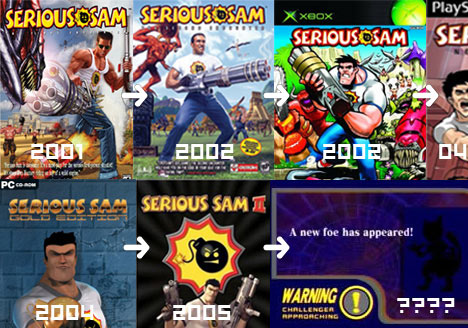 You simply cannot call yourself an FPS aficionado unless you have played one of the many Serious Sam games. The series is best known for its inventive weapons and nonstop action. The only problem? The game becomes extremely repetitive after a half hour of playtime.

Fan Site Seriously! has all of the details (translated from gaming magazine GamePlay) about Croteam’s upcoming Serious Sam 3 and their new tactical military shooter:

… About the plans for Serious Sam sequels and other projects, [Serious Sam 3] is being worked on, as well as the other project. The official public statement by the publisher will also be out soon. As for the new Serious Sam, you can be certain it will be the best sequel of Serious Sam when it’s done…

What we can say for now is that it’s a ‘military tactical-action shooter’, which is powered by our Serious Engine 3 technology. The game is set in the present; with ‘in your face’ action and requiring gamers to think before shooting. The technology allows the player the impression that he is at the very heart of the action. Audio-visual components of the game will encompass modern warfare using realistic, bloody and violent moments together with ‘fast-paced’ action. Using the Serious Engine 3, the game will have a lot of detail, from realistic metal materials, to the ‘cloth’ system to animated character faces.

I can only pray that Serious Sam 3 manages to fix its predecessors’ repetitiveness without straying too far away from its roots.