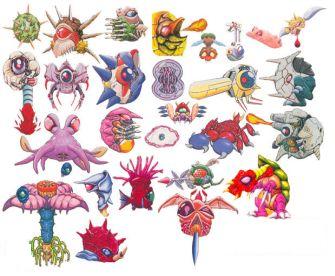 Any army, no matter who’s leading it, is only as good as its infantry. Go ask Napoleon and Hitler about Russia. The phrase “land war in Asia” sends grown men running, reducing them to a huddled mass of crying, blubbering jelly.

With that in mind, riddle me this: why do most games keep throwing the same types of enemies at us*? I’m not talking bosses — every game has cool bosses. I mean the cronies/henchmen/grunts/goons/thugs/peons/pissants. The guys that you have to annihilate hundreds of times for any given game.

Thankfully, some developers realize that if repetition ad nauseum is a part of your gameplay, it might as well be enjoyable. So hit the jump for my list of the most creative and satisfying cronies of my personal video game career.

*Notice that all these cronies from Metroid II: Return of Samus look vaguely crustacean. Snore. 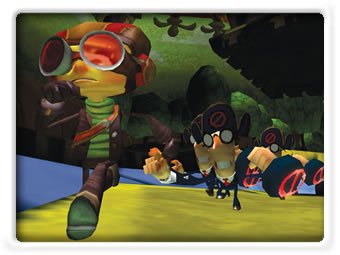 Social commentary: critical acclaim and monetary ruin! What impresses me most about Psychonauts is that the overall game experience is contingent, in large part, on the enemies you fight.

Look at it this way: Mario would work even if the Goombas were lavender and the Koopas were transmutated into giant armadillos. Not so with Psychonauts. The entire point of the game is to explore what makes people tick. And for most of us, the answer is censors, government men, den moms, and armies of tiny children with cookies. Take into account writer Tim Schaefer’s idea of games as wish fulfillment, and you have an entire game based on destroying the social institutions of our day. For once, it seems as if some thought has actually been put into the hordes of peons with which the player is forced to deal, instead of some mindless collection of polygons.

All in a beautifully artistic and delightfully wacky package. 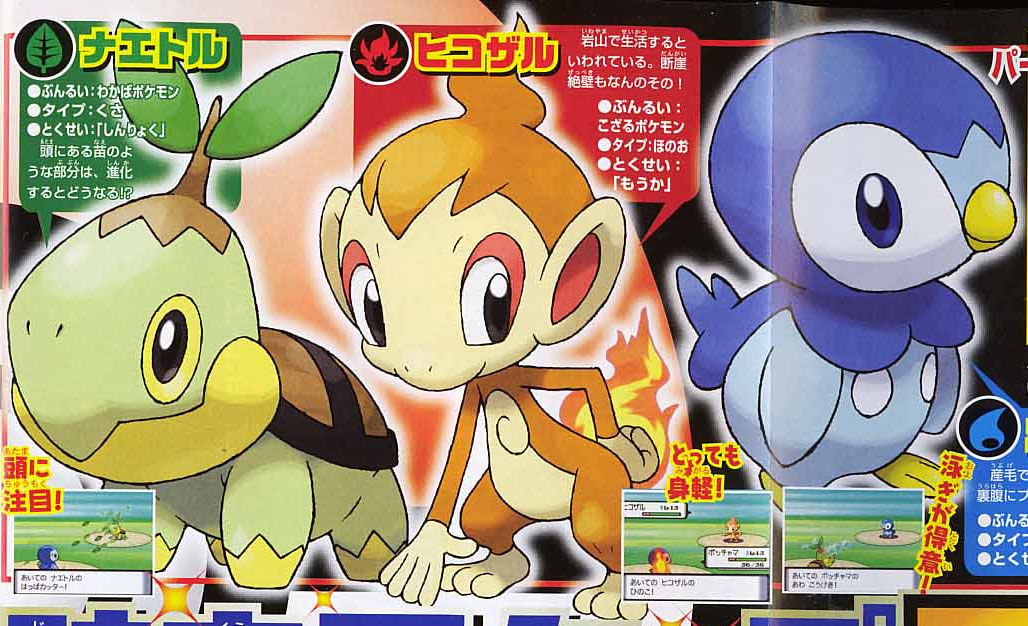 You can’t talk about enemies without talking about RPGs. And you can’t talk about RPGs without talking about Pokémon. What makes these denizens of pixilated baddies different from those found in any other RPG? None of them are palette swapped, that’s what! Every single enemy found in the entire franchise (486, as of Diamond and Pearl) are completely relatively original and totally customizable.

Besides creating an entire game based on cockfighting and finding a way to market it to children, Pokémon offers one of the most fleshed out worlds in gaming. Like Psychonauts, the success of this world has been almost completely dependent on the originality of its cronies. Too boot, I can’t think of any other game that has you almost kill your enemies. This gives players an incentive to play with a certain level of finesse. Simply put, Pokémon provides a unique and intensely satisfying experience. Go ahead and admit it, you know you’ve busted out your copy of Red recently.

P.S. Now you can catch Mew.

Ahh, Kirby, a platformer whose main appeal is that it isn’t another Mario clone. HAL decided to take a new approach to cronie-smashing — jumping on them is hardly the most effective way to dispatch your enemies. Instead, you get options taken right out of the Amazon jungle: should I eat my enemy and consume his strength, or spit it at someone else? That’s right, kids, Kirby is essentially a cannibal, and that’s awesome. But, more importantly, Kirby gives you options. You can just swallow an enemy, spit him out as a star, or just take his powers. Again, finesse.

If that weren’t enough, King Dedede’s goons are just plain cool, like the guy that throws bombs at you. I hate that guy. And while Meta Knight doesn’t qualify for this list, his underlings Blade Knight and Sword Knight (seen above) do. They also kick ass, if only for the shiny armor and cool weapons. 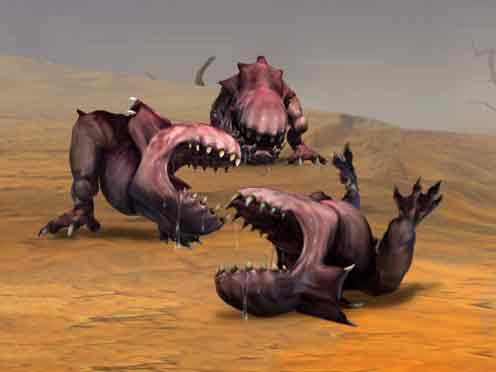 In my eyes, the original Oddworld did as much for innovative gameplay as any. That includes how Abe had to deal with his enemies as well. The Oddworld … world is pretty well done, complete with a dystopian, oppressive government and entire races of people who want to torture, enslave, kill, and otherwise behave nastily towards those poor little mudokons.

That being said, the Sligs, Slogs, and Glukkons were fucking ruthless. They were fast and vicious, and watching them trample and chew Abe’s poor emaciated body was simultaneously entertaining and disconcerting. They were also pretty smart, as far as platformers go. Most platforming enemies just walk through a preset pattern, but the legions of Sligs and Slogs actively sought you out, in order to brutally kill you. Nice chaps.

If that wasn’t enough, they just looked cool. Check out that screenie — how intimidating is a giant pitt-bull thing that’s nothing but a mouth? And Sligs were like these big, tap-dancing, crab things, and you could attack their weak spot for massi … fuck it. 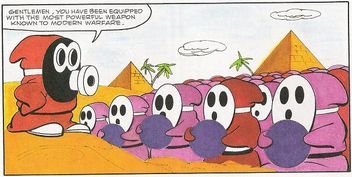 Thaaat’s right, Doki Doki Panic. Another platformer, thank God, in which jumping on one’s enemies does absolutely nothing. Well, that mixes things up, don’t it? I absolutely love the system for killing peons in this game. Essentially, you throw things at your enemies, but only after you’ve actually picked it up. In most games, you have a certain number of bullets/apples/whatevers at your disposal. In Doki Doki Panic, you have to scour the landscape for weapons, or pick up other enemies to hurl at the approaching ranks of ostriches, androgynous dinosaur things, and Shy Guys.

That’s right, Shy Guys, beloved cronies of Yoshi’s Island fame. Only in that game, you could jump on them. Incidentally, Bomb-ombs also first appeared in DDP, as did the Sun that harasses you in the 2nd world SMB3. Respeck yo’ ancestors. Werd.

And if you are confused by the connection to Mario 2 — find your answers here.

If you didn’t pick up on it from the inclusion of Psychonauts, I’ll make it perfectly clear: I have a boner for really zany games and art styles. The natural conclusion, then, is that I have a boner for Earthworm Jim. It could also be argued that the EWJ franchise is the spiritual predecessor of Spyro, Ratchet and Clank, and Jak and Daxter; however, I’m not going near that issue.

In any case, the goons that Jim must dispatch are visually stunning (at least they were at the time) and completely over the top, not to mention a little lighter on the social commentary. What I especially like is that they’re almost impossible to avoid. Where as most run and gun baddies can be easily avoided or tricked, Jim’s enemies seem unnaturally persistent. Most of them are also very small and fast — almost prohibitively so.

Zany character design and a relatively high level of difficulty? Yes, thanks. Did I play this game last week, in all of its 16-bit glory? Yes, I did.

I don’t think that anyone can argue Diablo‘s hyuuge influence on other games, most recently Hellgate:London. Everything about this game was memorable and excellently done, including the throngs of pissant demons that you had to slash through.

The enemies may’ve been a little lacking in the AI department, and most of them were just palette-swapped versions of … themselves, but I can’t say I really care in this case. What really sets these grunts apart was the attention to detail on Blizzard North’s part. Everything from the way zombies walk to the way the acid spitters sound when they, y’know, spit acid is simply amazing. The grunts, scrapes, and squeaks all added to the considerable ambiance and the physical movement was fluid and clean.

Equally impressive were their death scenes. Watching zombies’ limbs fall off and Overlords’ corpses explode in a mess of blood and gore was awesome. It gave the player a sense of accomplishment and power that is lacking when a dead baddie just disappears. That being said, Diablo remains one of my favorite games of all time. 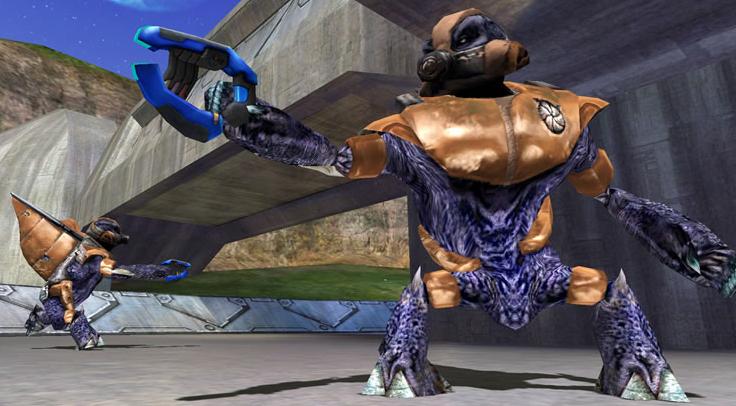 This is a bit of a cop-out, since the Covenant aren’t inherently different than any other space aliens bent on destruction. They do have decent AI and a nice arsenal, but that really isn’t enough.

No, what I like about them is their propensity for shit talking, especially the Grunts. I can’t really verify, but I’m almost sure that those squeaks, squeals, zonks, and other random onomatopoeias are, some how, insulting my IQ or my mother’s waist. That, coupled with Grunts’ tendencies to turn tail and run, makes for a very satisfying pistol-whip smackdown.

Well, there you have it. What do you guys think? Are common enemies important, or is it all about the bosses? What would you add to the list?