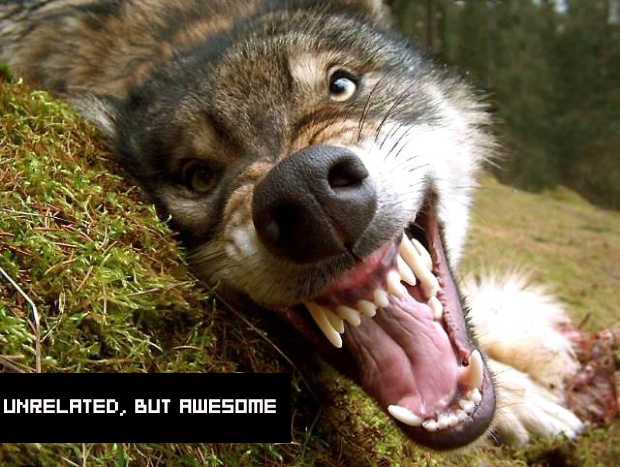 Things didn’t look so good for the ESA last year, with major companies such as NCSoft and LucasArts abandoning ship and all the not-so-hot feedback about E3. The ESA obviously saw the need to make a change, and this the announcement that this year’s E3 could possibly be the biggest yet, it looks like things are looking rosy once again. Well, that and the fact that new members are coming to the ESA to replace the ones that left.

Crave Entertainment, KOEI Corporation and Playlogic Entertainment, Inc. formally announced that they have joined the ESA today, and I’m wondering how many more companies we may see make the same move, especially after the sound of this year’s “bigger and better than ever” E3. It sounds pretty exciting, and I’m glad to hear things are on the upswing again for the ESA. Otherwise, I’d have to make like that wolf up there when it comes to enduring another E3 that felt less like a gaming convention and more like an accounting conference.

“Our growing membership is a reflection of the ESA’s valued and successful work on the key public policy issues facing the entertainment software industry,” said Michael D. Gallagher, CEO of the ESA. “Crave Entertainment, KOEI and Playlogic are key partners in leading that effort, and I am pleased to welcome them to the ESA.”

Formed in 1997 and based out of Newport Beach, Calif., Crave Entertainment is a publisher of videogame entertainment products for all of the major console and handheld gaming platforms that focuses on providing quality content in the casual and value gaming markets.  Crave Entertainment publishes software in a variety of genres including Brunswick Bowling and the Pinball Hall of Fame series.

“With the Fillpoint acquisition of Crave Entertainment and SVG Distribution complete, we are excited to be renewing our membership and affiliation with the ESA”, stated David Burchi, Senior Vice President of Content and Strategic Development.  “The ESA has been instrumental in our industry and we are proud to be a part of their efforts.”

Based in Burlingame, Calif., KOEI Corporation established operations in 1988 as the North American subsidiary of KOEI Co., Ltd. of Japan. KOEI is respected worldwide as the premier brand of strategy and simulation games, and is the innovator of the Tactical Action genre. The company’s Warriors series of games have generated a combined 18 million units in global sales.

“KOEI is proud to join the ESA, an organization that represents the positive growth of the computer and video game industry,” said President Kenji Matsubara of KOEI Corporation. “We look forward to participating in the association’s ongoing programs and initiatives, and to working with member companies to broaden the visibility of the entertainment software industry in the U.S.”

Playlogic Entertainment Inc., with its U.S. headquarters in New York, is an independent publisher of entertainment software for consoles, PCs, handhelds, mobile devices and other digital media. Playlogic publishes various genres of games developed throughout the world and also has an in-house production facility located in the Netherlands.

“We are launching Playlogic as a standalone publisher in North America with the goal to bring gaming content that appeals to audiences of all ages and gaming interests,” said Paige Carlson, Vice President, Sales and Operations, North America. “You’ll see a lineup that includes family friendly console games as well as ground-breaking mature rated games for the core next gen gamer.”

About the Entertainment Software Association

About Playlogic
Playlogic Entertainment, Inc. is an independent worldwide publisher of entertainment software for consoles, PCs, handhelds, mobile devices, and other digital media. Playlogic distributes its products through all available channels, online and offline. Playlogic, who currently has approximately 110 employees, is listed on Nasdaq OTC under the symbol “PLGC.OB” and is headquartered in New York, USA and Amsterdam, the Netherlands. Its in-house game development studio “Playlogic Game Factory” is based in Breda (the Netherlands).