In my ever exciting life as a gaming journo, I stopped by Majesco today to check out some titles coming out this year, most notably Cooking Mama: Cook Off for the Wii. Not only did I get to see the game in action, but I also got to play a little multiplayer as well. Since the title is so simple, there wasn’t a whole lot of time spent with it.

Either way, hit the jump for my impressions. Oh, and before you go, here’s one very important thing to know: No online multiplayer. I’ll get into that when you click on over. 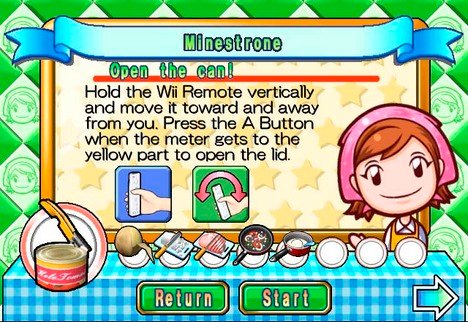 Let’s get the basic junk out of the way: Cooking Mama on the Wii will ship in April this year and retail for $49.99 — kind of steep if you ask me for a game like this, but oh well. The game will feature NO online multiplayer whatsoever — more on that later — but will have some cool offline multiplayer cook-off modes, including a new challenge mode. There are more than 250 foods to create and 55 real world dishes from 10 different nations: Japan, America, France, India, Russia, England, China, Spain, Germany and Italy.

OK, now for the good stuff. The gameplay is pretty much what you’d expect if you played the DS version. It’s not a straight port, but it’s very similar as far as modes and play styles. If you’ve played WarioWare for the Wii, you’ll actually find a lot of the movements to be very similar on Cooking Mama, except you of course do them with a Wiimote this time. 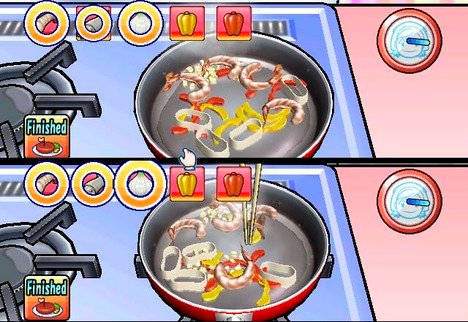 The sad part is though, that like WarioWare, some of the Wiimote gestures are a bit tricky and don’t respond as well as you’d like — this is actually a disturbing trend on the Wii.

The happy part is that the game is fun, especially in the two-player challenge mode. It’s no Iron Chef, but it is a light and easy game that you could play with your kid sister or aging grandma. In essence, the game is a perfect example of what the Wii is all about: It’s casual, it’s fun, and it’s simple.

My biggest bone to pick with the game is the lack of online multiplayer. I spoke with the Majesco rep about it and he talked about how Nintendo was still keeping their online service a secret from developers. Basically saying that Nintendo is not letting devs know how to develop their games for Nintendo’s online service.

In case you don’t think this is a problem, let me tell you, it is. In fact, the rep was telling me that the online question is the #1 thing he is asked all the time about the game. Everyone wants it and everyone wants to know about it. The bottomline is that for now, if a Wii game doesn’t have online, don’t blame the developer or publisher. It seems that Nintendo is content to keep online on their games only … for now.

Let me finish by saying this: I liked Cooking Mama on the DS and I like this Wii version. While the Wiimote may not have been as accurate as I would have liked for some of the actions, this was an early build and they do have some time to lock things down, so there is hope.