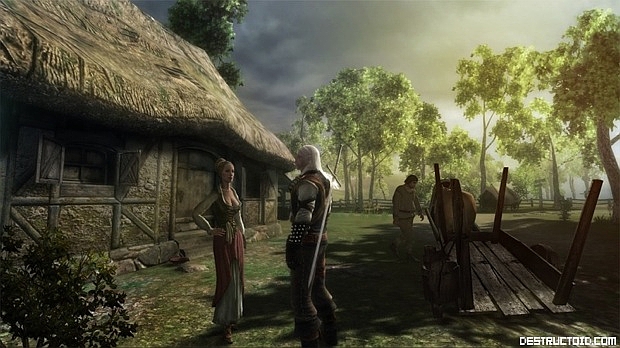 It’s possible that CD Projekt RED’s The Witcher: Rise of the White Wolf — the current generation console port of the popular PC RPG The Witcher — has been cancelled.

GameBanshee is reporting that the studio has become a victim of financial turmoil. As a result money issues, CD Projekt RED has experienced two separate rounds of layoffs and was forced to kill two projects: an unannounced The Witcher IP and The Witcher: Rise of the White Wolf.

Rumors of the console RPG’s demise surfaced yesterday in a Polygamia report. We immediately fired an e-mail to Atari — the game’s publisher — for comment. An Atari representative told us this morning that “I have no information about any change of status for the game.”

Rise of the White Wolf was announced on December 2, 2008. It was slated to hit store shelves in Fall 2009. Fifteen screenshots have been released to the press since the game was announced.

A post by CD Project RED’s PR and community manager on the studio’s message board about the game’s possible cancellation appears ominous. “We will comment on this in official release soon,” the representative wrote today.

We’ve asked for comment from CD Projekt RED despite the message board post. As of press time, the studio hasn’t replied.

There are some mixed messages in all of this for sure. Chances are that we won’t know if the title is alive or dead until the RED prepares their statement. We’ll be bummed if it’s cancelled. Any RPG that shows nipple is worth our time.