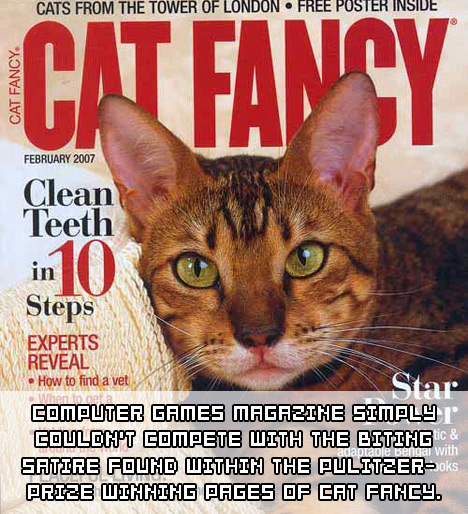 In Disney movies, longevity guarantees you a nice gold watch, a beautiful, yet matronly wife and a retirement bungalow in the hills overlooking Malibu; sadly, the real world was not part of Walt Disney’s fever dream of how things should be. Computer Games Magazine, the second longest-running PC gaming magazine in existence, is being shuttered (along with sister magazine Massive) by publisher, TheGlobe.com. Lacking the biting niche hipsterism of Vice or the up-to-the-bleeding-edge-of-the-minute coverage the Internet offers, Computer Games Magazine had been showing falling profits in recent years, and if there’s one thing I know about TheGlobe.com, it’s that they don’t stand for declining profits. Also, I know very little about TheGlobe.com.

If this article was being written by Rob, this is where you could expect to find some self-congratulatory comments about the death of print media and how Destructoid is taking over the world, but I prefer to masturbate in private. I will pose a question to all of you reading this, however; is there a chance that the recent failure of so many gaming magazines is due to the loss of interest in the inner-workings of the games industry by the new influx of casual gamers? You’ve got to admit, that while the Wii (and other inclusion-oriented ventures) brings Ma and Pa Scared-Of-A-Joystick into the gaming fold, they certainly don’t care who Tommy Tallarico is.