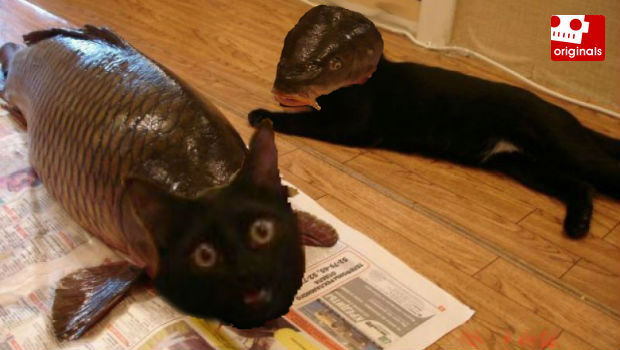 I told them not to toy with nature. Now look what they have done.

TRUTH: Squirrel on a tree branch.

WUT? Squirrel on a bed of rice.

[Many thanks to LawofThermalDynamics for contributing to this week’s comments]

Sean: I would like to go out with her because I have money and a nice car and I think she would respond well to those kind of personality traits.

Oh wait, she used to have a job writing on the internet? Pass. No geek girls please thanks.

Law: Sean, I’d gladly give Alyssa a date, but she better not be a woman cause that’s a deal breaker.

Law: From PAX: Eyes on with a bigger, better Assassin’s Creed

Law: Regardless of how you feel about yearly releases, one thing we can all agree on is that cheap games are usually a good thing.

Sean: I agree. Though my bank manager doesn’t see it that way when I try to explain to him where all my money went.

Law: One day we’ll have a unified system where all video game companies will work hand in hand with each other to provide a universal system of video game co-distribution and co-development…Until then I guess we’re stuck with Capitalism : (

Sean: Woah woah woah, “unified”? “universal”? Isn’t that the same kind of thinking that went into building Skynet in The Terminator? Look what happened to that idea.

I don’t want to live in a future where small patches of human resistance fight against video game companies for control of the planet, and nor should you.

Law: Once I locked myself away in a room. Bottle of cola, music, and a marathon game of Tetris. That’s how you get things done son.

Law: From Skyrim will fit on one Xbox 360 disc so you can relax now

Law: Yeah okay, superior power, only needs one disc, console wars, blah blah blah, the bottom line is that getting up and switching disc is a litmus test to separate lazy gamers and the simply apathetic.

Sean: Back in the day I had Indiana Jones and the Fate of Atlantis on the Amiga. It came on 11 discs. You had to swap them constantly. We will never see those days again.

Law: From: Comments of GoldenGamerXero

Law: From Season Pass for Gears of War 3 DLC announced

Sean: Presumably, nor was dignity.

Law: From This is what vandalism looks like at PAX

Law: I wish played more Metal Gear so that I can make a joke about that, but the comment is already funny in its own right. On a related note, I was at PAX over the weekend and I’m kicking myself for not taking a dump on this toilet…Oh yes, you better believe there would have been pictures.

The cake is a lie.
There was a HOLE here. It’s gone now.
Or my favorite:

Sean In Hader’s defence, both pictures were in the “Wrinkly Things” folder.

Law:…What? You expect anything else?

Sean: I can hardly believe these rates! I must be crazy for giving these kind of rates away!

Remember that Ubisoft is from France, home of liberty, equality and fraternity. Bitter irony is bitter.

Law: From Call of Duty Elite Premium gets priced at $49.99 a year

Law: Or you’ll what? Burn the internet down? I’ll have you know that Sean’s a volunteer fireman so I’d like to see you try!

Sean: One time, a moal came right at me, and I had to kill it with a nife.

Law: I saw that. The moal was liek “Here I am!” and you were like “No way!” and then you stabbed it. Crazy stuff man.

Law: From EA: Call of Duty’s going to get some ‘real competition’

Law: I literally put this in the “Wut?” section because he sounds so sure of which game will be better yet doesn’t specify. Tell me oh clairvoyant one for I must have missed the memo.
[Note: This entry isn’t necessarily bad by any means, it just simply made me say “What?” when reading through it.]

Sean: I can see what Law is saying but I’m going to have to agree with General Zod and say I am totally psyched now thanks to EA’s constant coverage of the upcoming The Sims 3: Pets.

Sean: From Namco and Tecmo’s new PS3 game might be One Piece Musou

Sean: Today’s top story: Man has skin-tearing erection, still not sure if he had an erection at all.

Sean: I for one welcome the added intrusion and hope we have our privacy further invaded. For instance, I can only pee if someone is standing next to me.

Law: I don’t think that’s a statement one should make so easily and assuredly. I for one find it sexy to have the universe saved by a woman…er…was that not politically correct enough for anyone?

Sean: Well, Law, since you didn’t append the sentence with “…as long as they also found time to make me a sandwich.” I think you’ll get away with it.