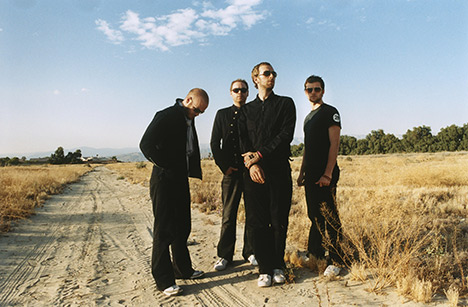 As many of you know, I stopped playing Guitar Hero III shortly after I bought it. I got stuck on Tenacious D’s “The Metal” on Expert, and after I became frustrated with the game’s arbitrarily difficult note charts, I bought Rock Band in mid-December. Since then, the GH III disc has not seen the inside of my PS3. Consequently, I have not spent a single penny on GH III DLC — not even when one of my favorite bands, Muse, was put in the game.

Another British alt-rock band that I absolutely love is Coldplay, and I’ve always thought they’d be a perfect fit for Rock Band (especially because I love to belt out Chris Martin’s vocals). However, Activision has sadly beaten Harmonix/MTV Games to the punch here. According to Entertainment Weekly, Coldplay’s new single, “Violet Hill”, off of their upcoming album, Viva La Vida or Death and All His Friends (set for release on June 17th), will be making an appearance in Guitar Hero III (presumably). Martin, the band’s frontman, mentioned that “[‘Violet Hill’] is the first Coldplay song to be put on Guitar Hero.”

If you haven’t heard “Violet Hill” yet, it’s very good — it’s more guitar-based, so I suppose it works in Guitar Hero. Still, just as with most songs by my favorite artists, I can’t help but lament that “Violet Hill” won’t be in Rock Band instead. There’s no price or release date mentioned, so I wonder if it’ll be released in a three-song pack with two songs I don’t want, just like most GH III DLC.

Hit the jump for thoughts on this from editors who are rabid Rock Band fans.

Nick Chester: Harmonix/MTV Games fail AGAIN. Seriously, Coldplay is one of the biggest pop/rock bands in the world right now, and their music clearly lends itself better to Rock Band than a Guitar Hero title.

Samit Sarkar: Oh, fucking hell. I absolutely LOVE Coldplay, and they have no business being in a Guitar Hero title. Even the songs of theirs that aren’t piano-based don’t contain insane shredding. Ugh, this really pisses me off. I don’t understand what Harmonix/MTV are doing, sitting on their hands like this. It’s not like Coldplay is one of those bands (AC/DC, Led Zeppelin, etc.) that are stingy with their licensing; “Speed of Sound” (the first single off of their last album, X&Y) was in one of the PS2 SingStar games, and I’m pretty sure that it’s DLC for SingStar on PS3 as well. Goddammit.

Nick: It’s totally frustrating. I’m wondering if Activision are just aggressively throwing cash around because they feel threatened by MTV Games. Who knows, but it sucks for fans of Rock Band.