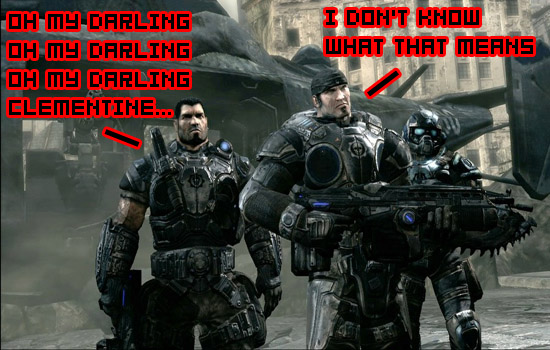 I hate Gamespot. When I run a multi-million dollar Web site that’s one of the most visited locations on the net, I’m pretty sure I’m going to think of a better question to ask the greatest developers of our generation than “What’s your blood type?” or “What’s your favorite swear word?”

Anyone who’s spent any time whatsoever with Cliffy B knows the answer to both of those, as you’ve likely had to give a doctor the former while Cliffy screams the latter.

But Gamespot does serve it’s purpose occasionally, as they have several video features that you simply can’t do with Ron Workman’s WaMu debit card and a bunch of cheese wrappers, try as we may.

Beyond the jump is just one of many said features where Cliffy B reveals his softer side. I’m assuming the interviewer is a smoking hot Swedish model, as no straight man without an ulterior motive would ever admit to liking Eternal Sunshine of the Spotless Mind and especially not Maggie Gyllenhaal. Jesus Christ Cliffy, Maggie Gyllenhaal? There comes a point when you need to just stop drinking.

If this is your type of thing, venture yonder for more interviews with several other respectable developers. F*cking Maggie Gyllenhaal … come on dude.