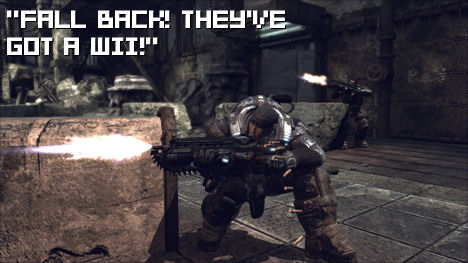 Microsoft is currently chasing the golden goose that is the so-called “casual” gamer, to the point where the Xbox 360 is about to be marketed as a source of karaoke games and wacky camera antics. A far cry from the “shooterbox” of old.

Cliff Bleszinski, creator of one of the Xbox 360’s biggest “hardcore” shooting games, has talked about how Gears of War 2 fits into MS’ plans. He talked about this in London, where I live, but I did not see him myself because Microsoft’s UK PR is sh*t. He also talked about Microsoft’s current marketing strategy:

“Microsoft currently has to walk that line right now where they’re selling a game that’s a bit more hardcore like a Gears while trying to expand the installed base in regards to casual gamers.

“Thankfully I’m in a position where I’m just trying to make the best game possible, but at the same time make sure that Casual [difficulty] is truly, truly easy, as well as having a little bit of heart in the story with a game that, yes, it’s about monsters, yes, it’s about chainsaws and blood, but it’s also about a guy who’s looking for his wife.

“There’s still a fair amount of jock, fratboy, macho bullshit in the game – I’m not going to lie. But at the same time, there’s a little bit more personal elements in there, and some of the themes in the game with loss, retribution and the sadness of war, I think they’re coming through a lot more in this game.”

Bleszinski also claimed that a lot of developers are “nervous” about this new trend in the industry, but only had this to say about the rise of the so-called casuals: “We say anybody playing videogames in our opinion is a very, very good thing.”

Yeah … just a shame that most of what they’re playing can barely qualify as videogames.