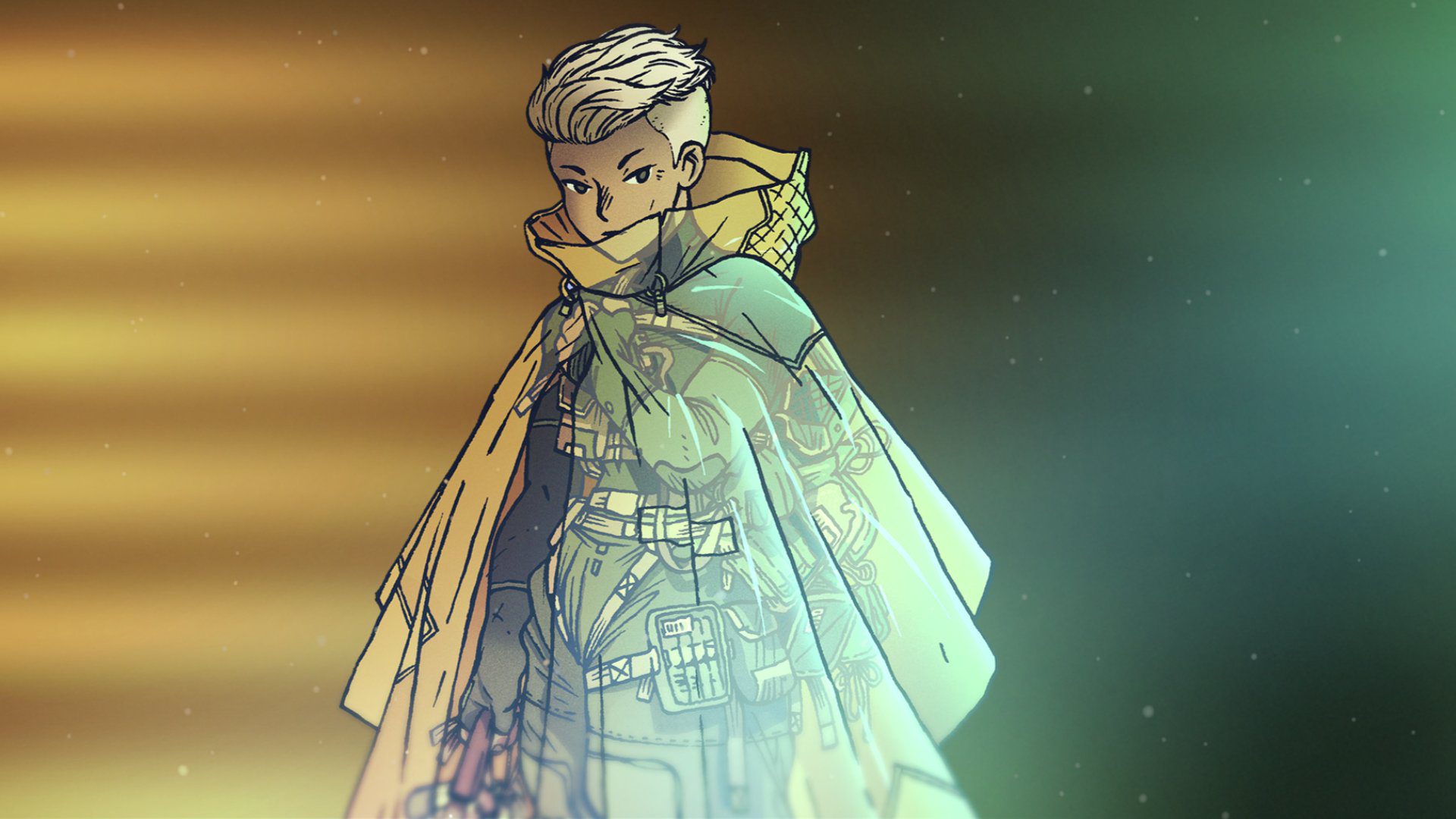 Here it is again: the void. Games have found countless reasons to thrust players out into the unknowable expanse of space, and Citizen Sleeper embraces that emptiness. My demo opens in a haze, with my player character trying to piece together fragments of memory and time as they come to.

Citizen Sleeper is an upcoming indie adventure game from Jump Over The Age, the developer behind the underwater exploration adventure In Other Waters. Trading one abyss for another, Citizen Sleeper heads into space, where you take on the role of a runaway sleeper—someone who has digitized their self and been put in an artificial body. On the run from a corporation that wants its property back, you find yourself on Erlin’s Eye, a ring-shaped station on the edge of the system.

Back in my demo, I’m woken up by a friendly mechanic. He’s helpful. But it’s not long before I have to work. I’m on a search for survival, and money can protect my gradually depreciating meters as I try to find some stability. Odd jobs will be crucial.

It’s here where I can start to roll die for each day and place those die rolls into various activities. High rolls mean either a successful or neutral outcome, while low rolls mean neutral or negative results. It’s a system that reminds me of tabletop gaming, something that developer Gareth Damian Martin tells me was a big inspiration.

The Eye is filled with activities, characters, and storylines to explore. Helping a stranger out near the docks might lead to a lucrative odd job, and becoming a bar patron could lead to making friends with the local bartender. Maybe you could get a steady gig out of it. Or maybe you’d rather spend your time working away at the shipyard, helping the mechanic who woke you up so he doesn’t lose his business. Similar to the way that tabletop RPG Blades in the Dark has downtime factored in, Citizen Sleeper asks players where they want to go and what they’re interested in, and Martin’s virtual DMing can lead them in various directions.

“I do think a lot of the development, when it comes to Citizen Sleeper, is kind of pre-DMing,” Martin tells me. “It’s like DMing from an incredibly long distance in time and space, like people are playing in a different country, in a different year. But in a way, the relationship is still kind of the same. I’m still trying to tempt people with hooks. I’m still trying to surprise people by having narrative come in at kind of unexpected moments.”

Dice are one part of the narrative toolset, creating a constant weighing of risk vs. reward. Some days, I would have to consider where to spend my best die; a six is a guaranteed positive outcome, which is great for making progress on certain tasks or getting some surefire cash. Yet a six might also work better for my hacking, where I need specific die rolls to unlock information gates and acquire data. Or maybe I can burn a rolled-one in a frivolous task, or risk it for a potential net-neutral outcome. 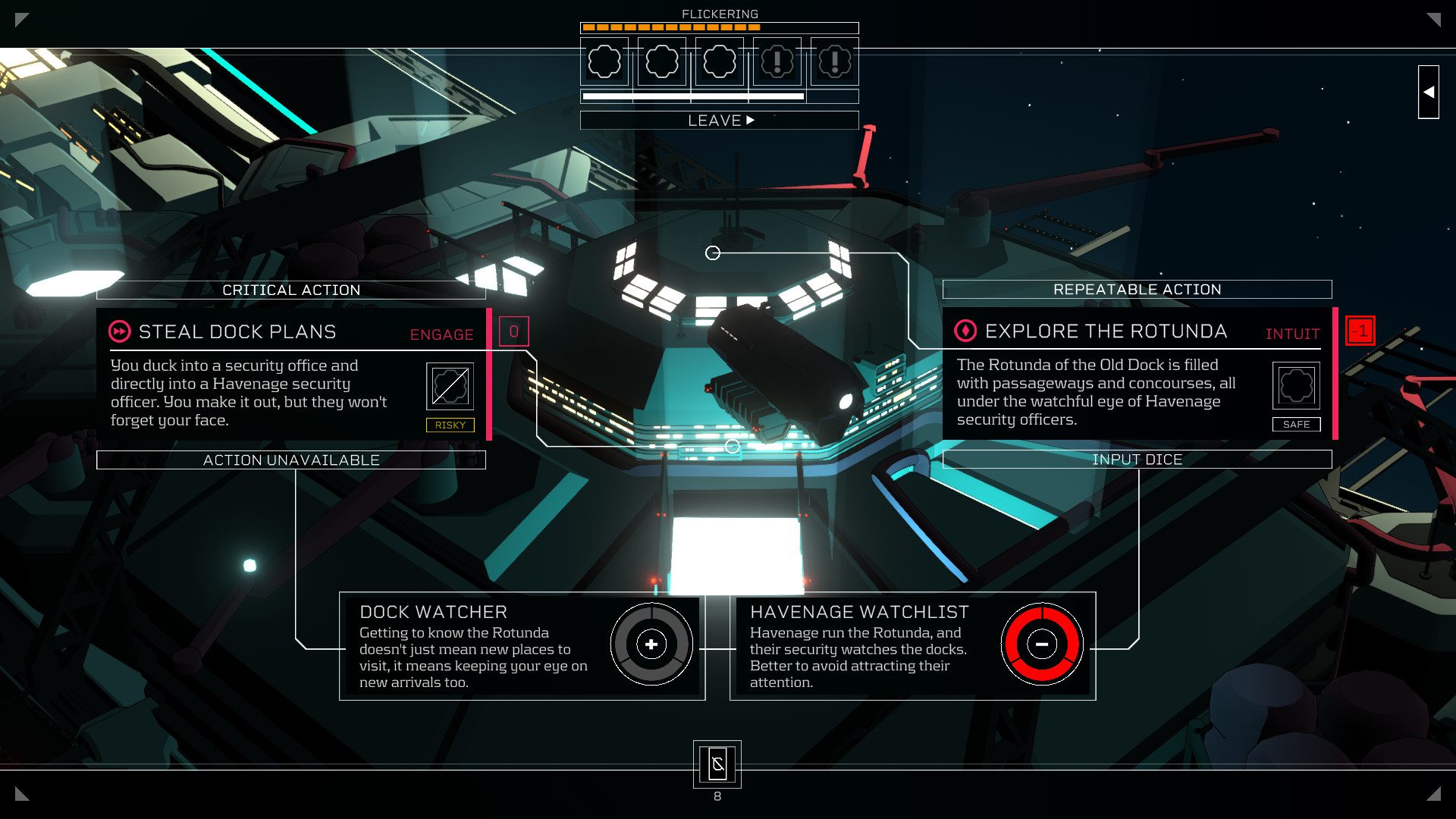 All the while, hunger is going down, and my state of being is depreciating. One of the earliest problems to deal with is that sleepers need special drugs to maintain themselves, as organic souls inside inorganic bodies, and those are controlled by the corporations. An early quest that was paramount to just getting through each day had me making a deal with a back-alley doctor who could get me the meds I needed. And the meds, to be clear, had some side effects. But they stopped my meters from slowly bleeding out. That was worth it.

It’s not all staving off hunger and death, though. One of my favorite systems is the clocks Martin uses to keep players moving forward. Tasks will have radial clocks that tick up over time, leading to new story bits. At first, they might seem like simple progression meters. But really, they felt to me like rewards for time spent in a place.

I mentioned the bar story before, but essentially if you hang around a certain bar long enough and become a ‘regular,’ you’ll have a story event pop up. After a run-in with some locals who don’t take kindly to your kind, the bartender backs you up and you can start forming a bond with them. I went from barfly to bar staff, eventually earning myself a new place to crash as time went on. We’re used to being rewarded in games for doing things, but exposing the system in a radial clock makes those actions a little more alluring and interesting.

“I think by exposing a process so that players know, ‘If I do this action, something is getting closer to happening,’ is really interesting,” Martin says. “It’s a really good hook.” Drawing comparisons to Destiny quests like the Thorn, Martin tells me how the banal can become interesting in storytelling. How even though you’re doing very straightforward tasks and menial jobs, a progress bar framed in the right way can feel effective and powerful. And it’s something I felt throughout my several playthroughs of Citizen Sleeper‘s demo.

On some days, I would have the cash to afford to eat at the nice food stall with the friendly chef, rather than just get something basic from the machines. Some mornings I’d wake up with fives and sixes, bright-eyed and ready to greet the day. And in one run, with a doomsday clock counting down to the last digit I needed, I rolled low and couldn’t make the cut.

“It also comes directly from my own experience, again, of just what it’s like to work in shitty jobs. What it’s like to be in a difficult position,” Martin says. “It’s like, some days you wake up and you’ve rolled all ones, right? Like, that’s what it feels like, you know. It doesn’t matter what you do that day.” 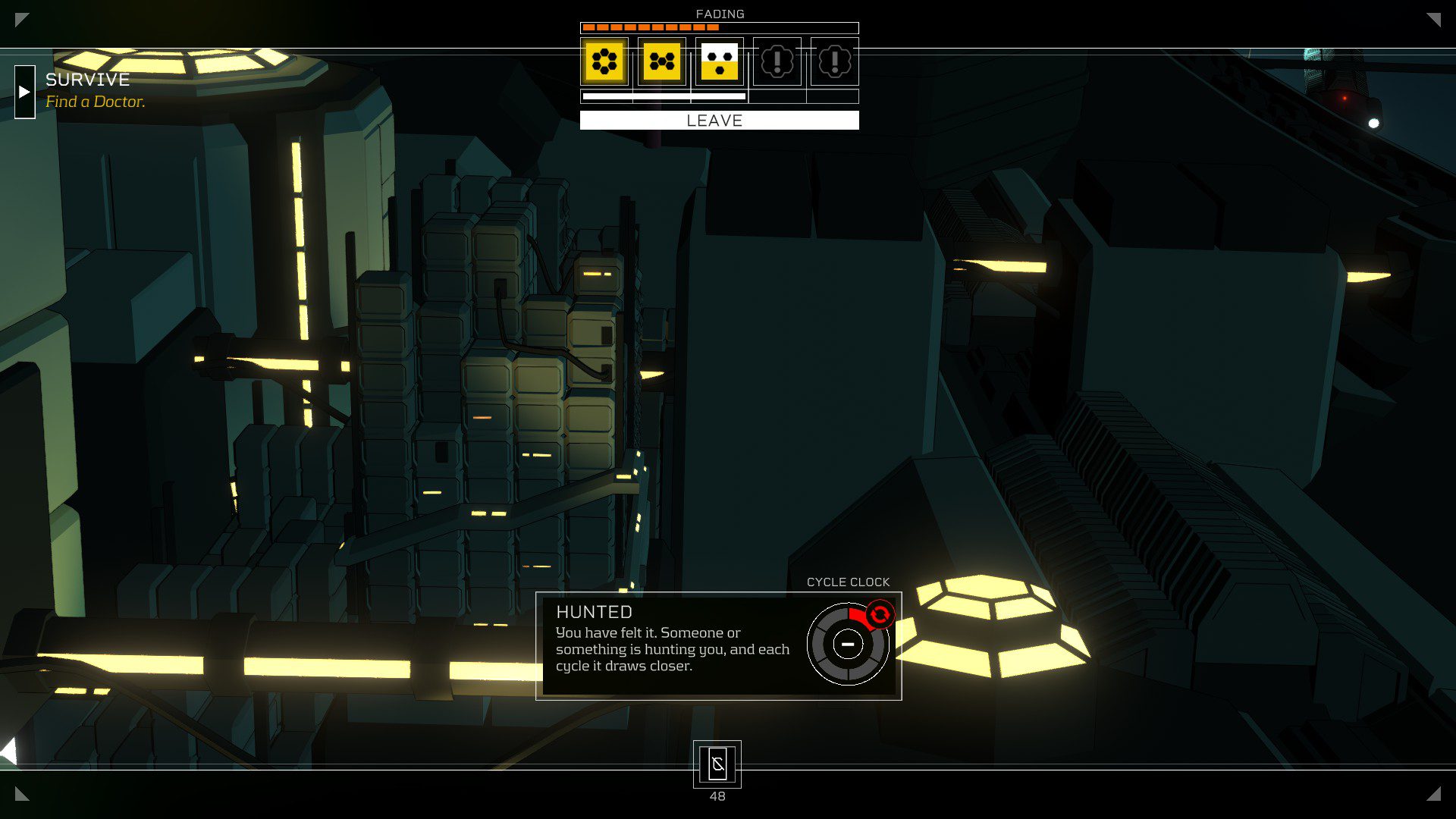 Still, it’s not necessarily a survival game. Really, to me, Citizen Sleeper feels like a living game. I know that sounds a bit cheesy, but it’s about life in a community. Erlin’s Eye is home to outcasts and wayward souls, with plenty of scoundrels and con artists running about. But there’s a united feeling in wanting to escape life under the corporate thumb.

And in this community, family can be found. And it can be built, through effort. Repeated attempts, failures and successes, and steadfast visits can stave off the eroding timers and, maybe eventually, your gradual degradation. The choices aren’t dire, and there are no world-ending catastrophes to uncover—at least, not in my demo there weren’t. It was just deciding where my time should go.

Coupled with the absolutely brilliant character art of Guillaume Singelin and an exquisite interface (complete with click-and-drag spinnable ring), Citizen Sleeper has a lot going for it already. It’s got good vibes, yes. It has a look and feel to it that feeds deep into its depiction of the Eye as a home for wayward spacefarers. And its meters hanging overhead communicate the constantly looming terror of corporate reprisal so, so well. And still, I want to return to Erlin’s Eye just to hang out. Just to fill a stool at my favorite bar again. To make some small talk with the local street food vendor, and learn more about the kind doctor whose less-than-savory methods saved my soul from its artificial shell. And maybe eventually uncover more of the Eye’s secrets along the way, too.

Even within the demo, there were beats I left uncovered. Threads I didn’t chase, even though I saw a few different variations of its ending. Maybe I didn’t get to them yet, or really, I didn’t want to exhaust all options just yet. There’s a lot of joy in uncovering the secrets of Citizen Sleeper, through work, rest, and relaxation. I’ll leave a few for launch day.

Citizen Sleeper is set to arrive in 2022 for PC. You can find the Steam page and wishlist button here.