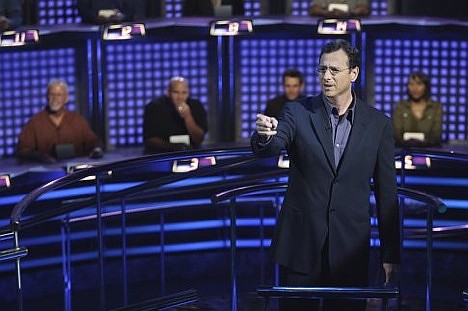 Microsoft’s presentation at CES lacked flash and spirit. But that doesn’t mean it didn’t have some merit. One of the first things revealed by Robbie Bach is quite important for those entrenched in the Xbox 360’s New Xbox Experience. Xbox Live Primetime and its initial game show “1 vs. 100” will debut this spring.

Tragically, it appears as though Bob Saget won’t be making a virtual appearance in “1 vs. 100.” The Avatar filling his shoes didn’t bare a resemblance, nor did the booming voice emulate his sexy delivery. I thought the host sounded like Cookie from You Don’t Know Jack, but my memories of that game are a bit fuzzy.

One of the questions asked during the live showing of the game pertained to the recent film The Curious Case of Benjamin Button. I quit paying attention after I heard the name of the movie, but it struck me that the question could be an early indication that Primetime could have a lot of fresh, topical stuff.