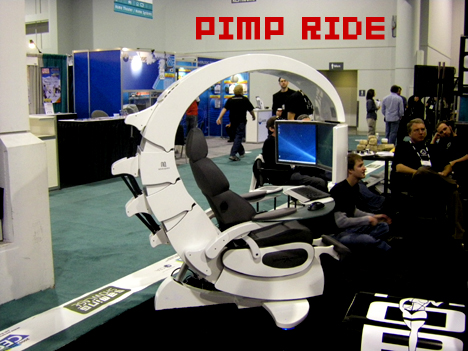 You know what I’m going to do once I’ve become disgustingly wealthy because of my highly literate work on a major gaming blog? I’m going to buy one of these chairs, sit down and never stand up again for anything ever.

This is an Emperor Workstation, and mere words cannot properly describe its glory. In addition to the three 19″ synchronized displays, it comes equipped with a 5.1 surround sound system (using BOSE speakers), a lamp which simulates natural light to reduce eye strain and a freakin’ air filtration system. The plush leather seat can be adjusted in three locations as well as tilting the entire unit back or forwards for maximum comfort using a touchscreen control panel.

Oh, and did I mention that the thing rotates? Yeah, it comes pre-programmed to turn 360 degrees over an eight-hour period in the event you’ve positioned it near a window and need to avoid irritating glare from the sun. And the monitor arm retracts to let you out of your awesome alien pod in the event that your house is on fire and you value your life more than the chair.

The Emperor is not cheap by any stretch of the imagination and retails for just under $40,000. So let’s get those pageviews crackin’, folks. My La-Z-Boy is looking a little ragged and I’d like to replace it with this bad boy as quickly as possible.