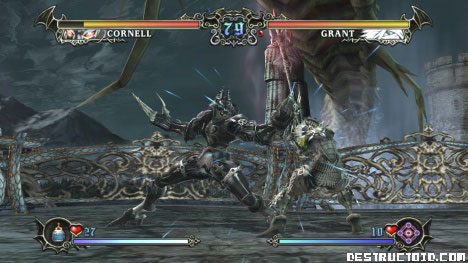 You all know the way I feel about my preview time with Castlevania Judgment (although if Koji Igarashi brings that whip around again, I could likely be convinced otherwise). These newest screens let us take a gander at three new characters, Grant Danasty, Sypha and Cornell. Should you want to read more background info on them, check out their mini-bios after the jump.

Of course, if you’re anything like me, you could care less about who these characters are and where they have been — your only concern being how much ass shreddage they can inflict. That being said, I’m thinking Cornell wins in terms of badassery. I dig his assassin knife action, not to mention it looks like it would make for all kinds of awesome deaths by stabbing.

Grant Danasty
Grant Danasty used to live as a noble thief (much like Robin Hood) all the while aspiring to become a vampire hunter like Trevor. As the most agile man in Transylvania, Grant Danasty joined forces with Trevor to defeat Dracula. Since overpowering Dracula, Grant Danasty has become a true champion of good, devoting his time to restoring the town to the days before Dracula’s rule.

Cornell
Cornell, a proud werewolf whose martial arts are said to be invincible, has come to rescue his younger sister Ada, who was kidnapped and taken to Dracula’s castle. With the blood of beast-men in his veins, in Castlevania Judgment, Cornell is transformed into a wolf and unable to change back.

Sypha
Sypha is a tough, strong-willed witch who uses fire, lightning and ice magic. Affiliated with the church, Sypha hides her true nature by wearing priestly clothes. While Sypha has not yet met Trevor, fate has determined that they will defeat Dracula together and then marry.