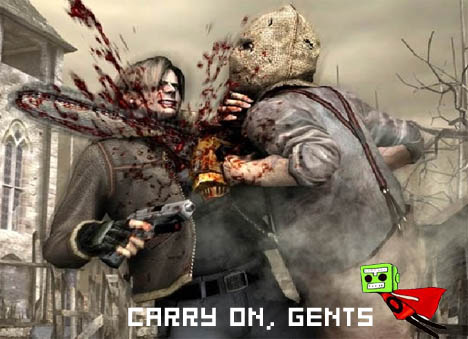 Gore in a horror videogame? Or, better yet, gore in a Resident Evil game? That’s positively absurd! Wait, no it isn’t.

Captain Obvious gives us a quick fly by to tell us that Resident Evil 5 will ship with plenty of gore packed in. Did anyone doubt that?

“We’re never going to create a gore-free Resident Evil title to try and get a lower rating as it’s a game about the horror experience and gore is part of that,” said Rhys Cash, Capcom UK’s research and planning manager. “We’re primarily about making great games and if it’s appropriate to the title we won’t shy away from making a 15+ or 18+ title.”

Cash mentioned that the popularity of the DS and Wii might cause some game makers to lean toward the younger ratings for their titles, but not Capcom.

“As we’ve shown with Resident Evil 4 Wii and Resident Evil: Umbrella Chronicles there’s still a market for more mature titles even on these formats.”

This non-news comes by way of MCV, a UK-based site. I guess I could see how UK gamers, after all of the Manhunt crap, would be concerned about the loss of gore in RE5. But, if you ask me, a Resident Evil without gore is like a Madden game without footballs.