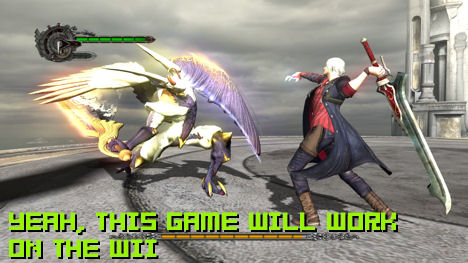 It’s been a rather boring news day, all things told, which is why we have no intention of making things interesting. Instead, enjoy a rather obvious piece of news: Capcom is considering porting more software to the Wii.

This stunning revelation came from a whiny Wii owner who accused Capcom of constantly giving Nintendo fans the shaft. Quite an amusing claim, in my opinion, given the fact that Capcom is perhaps the only third party to treat the Wii even halfway decently. This is what the jaded Wii owner said:

Capcom, I’m really pissed right now. I want to play these games, but you give us Wii owners the shaft. No RE5 Wii, possibly no Dead Rising 2, no Lost Planet, no Flock, no Age of Booty, No Street Fighter 4, no Devil May Cry, no Dark Void.

I’d personally call the above quote a piece of presumptuous, whiny, self-entitled horse’s vomit, but Capcom’s Christian Svensson actually listened to this plea and responded:

We are contemplating versions of one or two of the CEI titles you’ve mentioned on the Wii (not saying which), but we’d like to see how they do on their initial target systems before doubling down on additional SKUs.

So, any Wii owners with unrealistic demands and no grasp of business sense can put your minds and hearts at ease. Capcom hasn’t forgotten about you at all, though if you actually believed they had, you really are stupid. About as stupid as someone who wants Devil May Cry 4 but doesn’t own a PC/PS3/360.