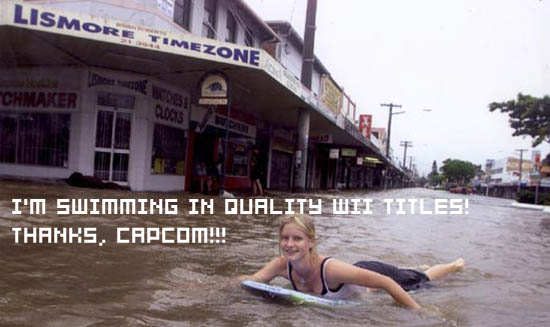 “Flooded” is not a word that gamers like to hear. It makes us think of shovelware and ports. But, this is Capcom we’re talking about here, and they’re saying that this upcoming flood will involve “triple A” titles. If that’s the case, then bring it on!

Nintendic came across this message from a Capcom Community Specialist on their official forums:

“Honestly, I think the lack of AAA titles also has a lot to do with a lot of the 3rd parties simply being caught with their pants down. Triple A take a lot of time to develop; Many years in fact. For them to have been announced/released by now, it would have meant that they were in development/planning before/shortly after the Wii was released. However, nobody, besides Nintendo, expected the Wii sales to be so strong, and anyone who did should be buying lottery tickets.”

“However, the good news is, now that the industry has seen the rise of the Wii, I’m sure many plans and budgets have been shifted and adjusted, and triple A titles should be in their pipeline (though not ready to be announced). This means soon, you should be flooded with the titles from the franchises you’re familiar with, and ones that aren’t just spinoffs.”

“Have a little patience and faith in the little white console that could. I know I am.” ‘Lost’ – Community Specialist, Capcom Entertainment, Inc.

I’m more than happy to take anything that Capcom dishes out. Do you think this guy is just blabbering on? Or do they really have some good stuff up their sleeves for the Wii?