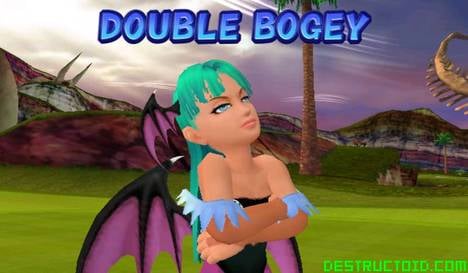 Available in Japan since last year, Capcom’s Wii exclusive title We Love Golf! is nearly ready for release in North America. Today, Capcom has revealed the two new characters — Stephanie and Mark — as well as their alternate costumes.

Fans were given the choice to select the exclusive alternate outfits, from a list of awesome Capcom classic characters like Dead Rising‘s Frank West and Guy from Final Fight. But in the end, Ken from Street Fighter‘s red gi for Mark, and Morrigan from Darkstalker‘s outfit for Stephanie were chosen in the end.

I was hoping we’d get “King Shriek” from Trojan, so this is a bit disappointing. Any classic or obscure Capcom characters you thinks should have made it into We Love Golf!?