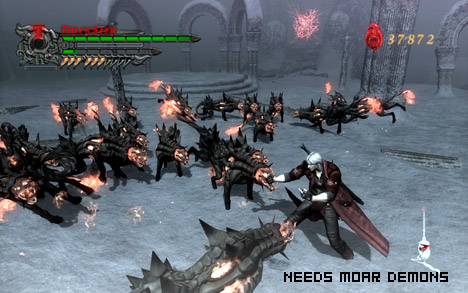 For those of you who missed Devil May Cry 4 when it hit consoles back in February, here’s your chance to check out the feature-superior PC version of the game.

The demo itself features the same content as the one that’s available on both the PlayStation Network and Xbox Live right now (a boss battle and 10 minutes worth of gameplay), but there’s also a benchmark test thrown in for good measure.

Exclusive to the PC version of DMC 4 are Turbo Mode (turns up the speed) and Dark Knight Mode (even more enemies on-screen), in addition to support for up to 120 frames per second and DX10.

If my aging rig was able to run the game on high settings with a decent frame rate, then most of you shouldn’t have any problems playing the game either. Head on over to your download Web site of choice, or here, if you want to be surprised.

Filed under... #demos#Devil May Cry