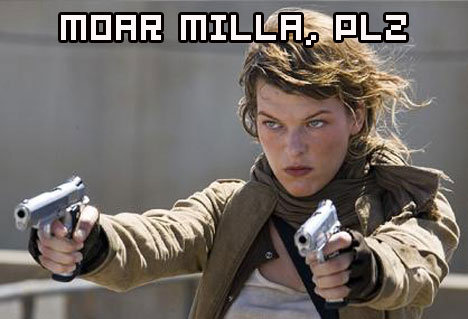 While Resident Evil isn’t my favorite game-turned-film (that honor goes to Silent Hill), I certainly enjoyed the first film enough to speak positively of it after seeing it. Not being obsessed with Resident Evil however, I’m sure many details that would have annoyed fans of the series flew over my head. Sadly, the tough chick tactic worked flawlessly on me — I thought Milla was a badass and I wanted more of that.

Apparently, I wasn’t alone on that, as the Resident Evil films did well enough in theaters to make Capcom decide they wanted more opportunities to squeeze money out of their fans. Capcom’s president, Haruhiro Tsujimoto, has revealed that the company is chatting it up with Hollywood studios and recieved several offers at the recent Cannes Film Festival.

Tsujimoto also said “We want to do with games what Marvel did with comics” in reference to all the popular films based on Marvel characters.

We already know about Street Fighter and Onimusha, although the latter hasn’t made it to production yet. Bloomberg Television, the source for the Tsujimoto quotes, directly mentions Devil May Cry, but Tsujimoto did not specify that a film based on that game would be made. My mind wanders directly to Mega Man. I hope I’m alone in that … I’m not sure I ever want to see a real guy dressed in that little blue suit.