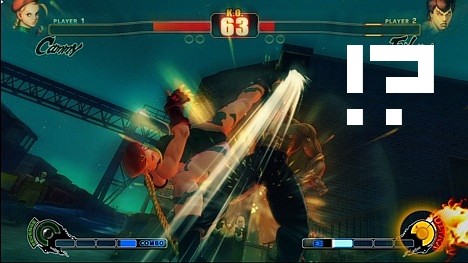 Cammy could crack a spaghetti sauce can between her thighs. She also has a pretty mean screwdriver attack that haunts my Super Street Fighter II Turbo HD Remix nightmares. Why crush these two awesome features by wearing such a silly getup? Take a look at the gallery of Super Street Fighter IV screens Capcom recently released. How could any girl with a string riding up her arse that hard do a high kick without splitting in half?

I suppose this is the point of objectification. Show the chick and her buttocks. That’ll please the male demographic, right? If I were a Capcom marketing guy I would release the same set of images.

That’s a lie. I would find nude shots of the female characters, because that’s what every real Street Fighter fan wants. Screw substance, visual flair, or deep network play. It’s all about the skin, baby.

Super Street Fighter IV will punch retailers in the mouth mid-February on the Xbox 360 and PlayStation 3. To celebrate its impending release, I purchased this official arcade stick for 40 dollars. I’ll be looking to hurt (and love) you when the game and Cammy’s luxurious thighs make their debut.