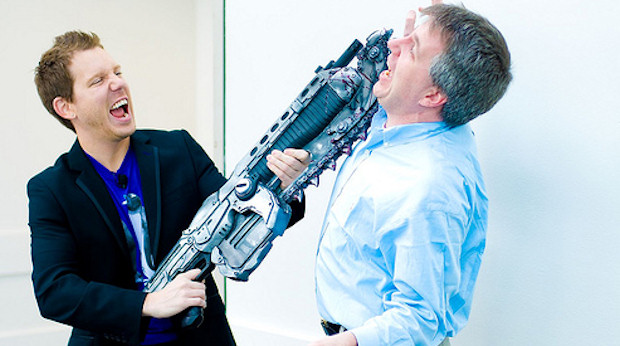 Cliff Bleszinski has a reputation as a bit of a wanker, partly because he decided to stop calling himself Cliffy B, which some people took to be a mark of arrogance. According to Cliff, however, he doesn’t really care what you call him. I am going to start calling him Coco Bongos.

“Honestly, that was just a media experiment to me. It was Stephen Totilo who started it,” explains Coco. “I had an IM conversation with him and said, ‘I’m thinking of abandoning that.’ And he broke it on MTV Multiplayer, and it got picked up everywhere, and then it turned into “Who does he think he is?” Dude, the fact that you’re getting upset just means you’re playing along with my joke here. You can call me whatever you like as long as you play the game.”

I’ve never understood why people hate Coco Bongos so much. He might have a bit of an ego, but when you create one of the most popular shooters of the generation, I think you’re allowed at least a little bit of an attitude. So long as he doesn’t start Twittering for police help after being attacked by the Black Eyed Peas, he can’t be that bad.