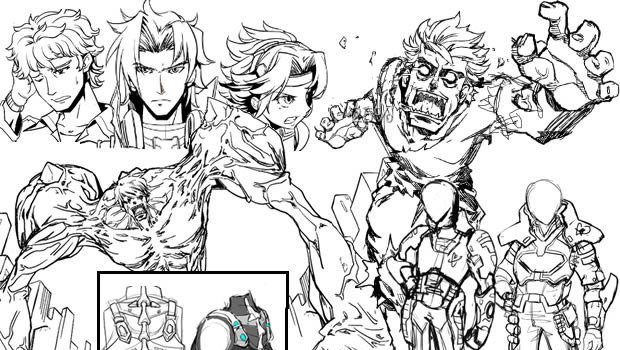 A lot of people have taken to poo-pooing “retro” graphics, stating that the style has been “played out” in gaming, music, and film thanks to countless attempts to pander to nostalgic 20-30 somethings. Fair enough, but if it’s dumb to like a game just because it has low-res sprite artwork, then it’s just as dumb to dislike it for the same reason, right? Hopefully we’ll get to a point where every style of graphics is accepted as “current” and valid.

Take C-Wars (by Onipunks) for example. The game’s animations are highly expressive, fluid, and violent, working in beautiful contrast to the cute, low-res character art. It looks fantastic regardless of when it was made or feelings of nostalgia. While these sprites are simple, they aren’t easy to make. This time lapse video shows the 10-hour process of putting together one animation. The game is planned to have over 800 animations in this style, all in a game that’s less than one megabyte in size. Pretty intense!

The detail in C-Wars isn’t relegated to just the visuals. The game will never play the same way twice, and your decisions in the story and in the action will do a lot to determine what characters you meet and how the narrative unfolds. On top of that, you can recruit enemy bosses to join your group. Team up with the futuristic mafioso against zombie mutants, team up with zombie mutants against the government, or team up with everybody against everyone. It’s all up to you.

There is a lot more to C-Wars than that (including characters from They Bleed Pixels, Cryamore, and Wooden Sen’Sey). I’d love to see this one make it to handhelds like PS Vita/3DS/Wii U and/or include characters from other games (and podcasts). Check out the Alpha, let the devs know what you want, and back that thing up if you agree.