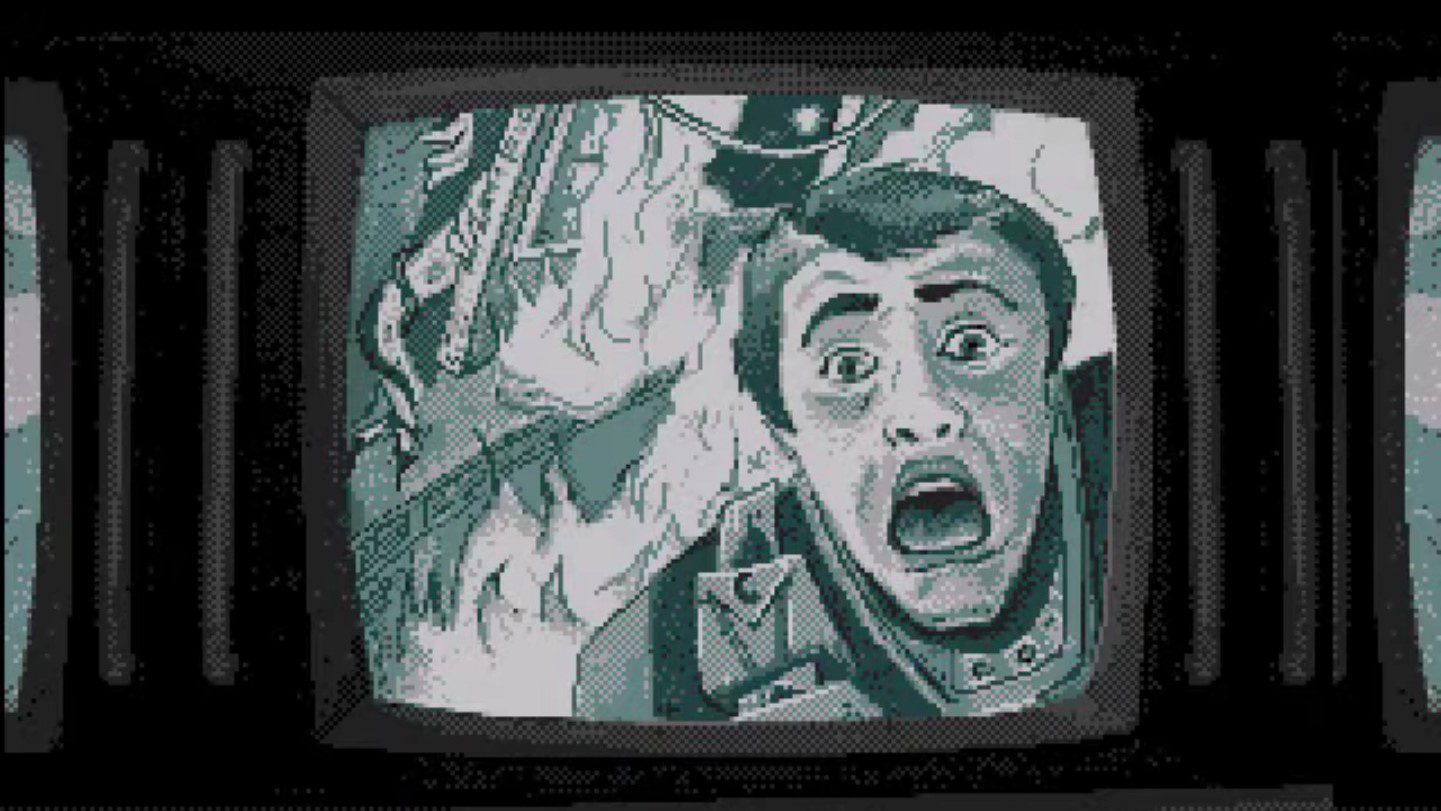 Make sure you have your I.D. on you

The first-person shooter genre was a dominant force in the ‘90s. Starting with Wolfenstein 3D, it continued to gain traction in the PC market. On home consoles, it was a different story. 16-bit consoles strained to handle the ray casted environments that allowed their PC counterparts to depict 3D environments so smoothly. The SNES had a few examples, most notably ports of Wolf 3D and Doom, the Genesis wasn’t quite as up to the task.

There were four FPS games available on the naked Genesis, one exclusive to Europe and one exclusive to Brazil. They’re all rather impressive, with Cyber-Cop even pre-dating Wolfenstein 3D. Zero Tolerance, however, is perhaps the most technically tantalizing. You know, if nothing else. 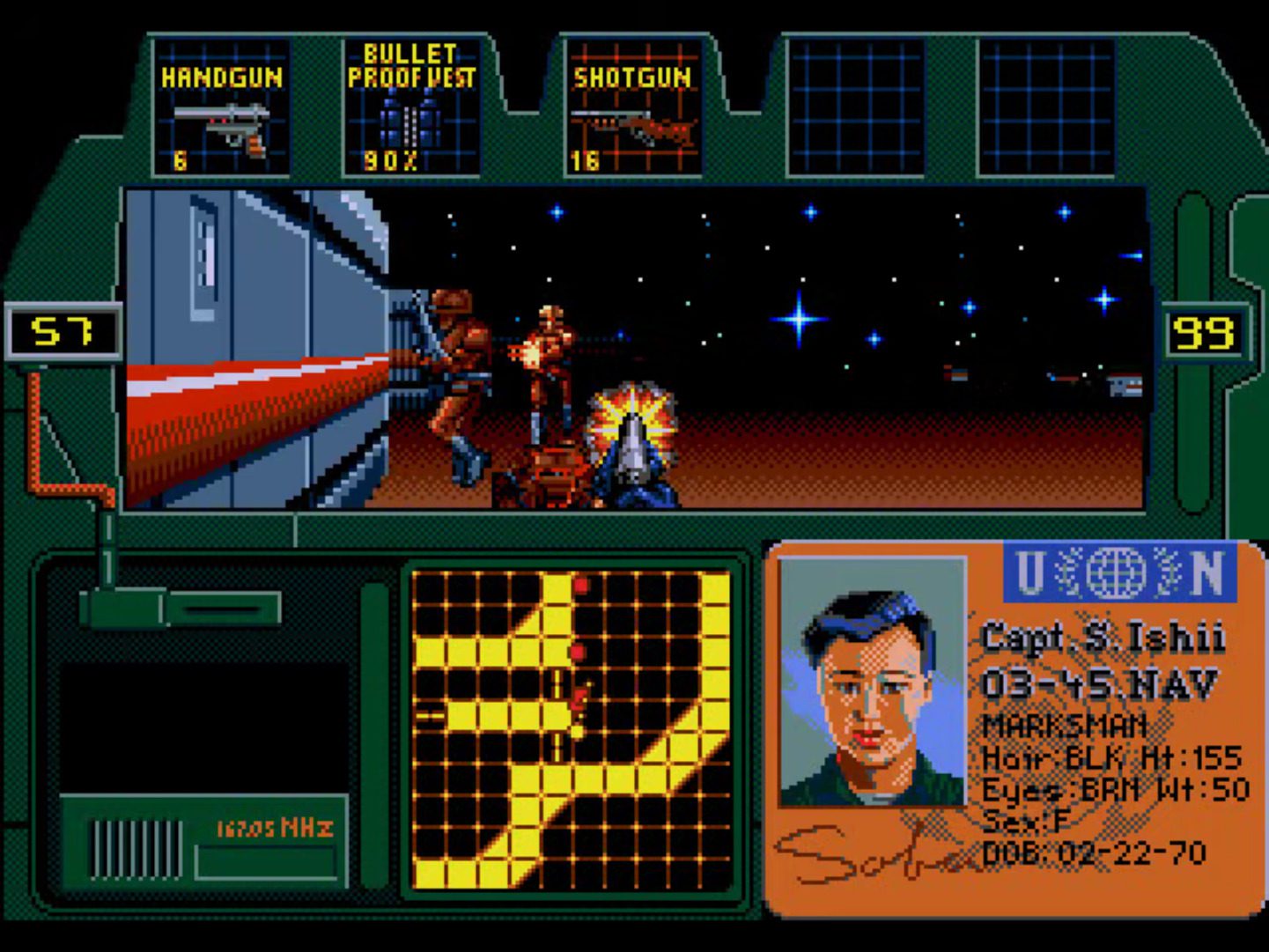 Released by Technopop in 1994, Zero Tolerance is the story of a team of humans trapped in a series of mazes. They fight bad guys, and there are lots of bad guys about. Okay, seriously, it has something to do with a reactor on the verge of exploding, but eventually, it’s about not that.

You get to select your team member, each of which has their own strengths and weaknesses. If one dies, you pick another and the dead one is dead. It’s not a bad life system, but if your favorite character gets killed, you just need to throw in the password for the previous stage and then not die.

As for their disparate skills, the differences are not terribly pronounced, but there are advantages to picking certain characters in specific situations. For example, some of the later levels are very stingy with their ammo supplies, so using the hand-to-hand expert can get you through when your resources are low. Otherwise, I played as just one character because I’m boring. 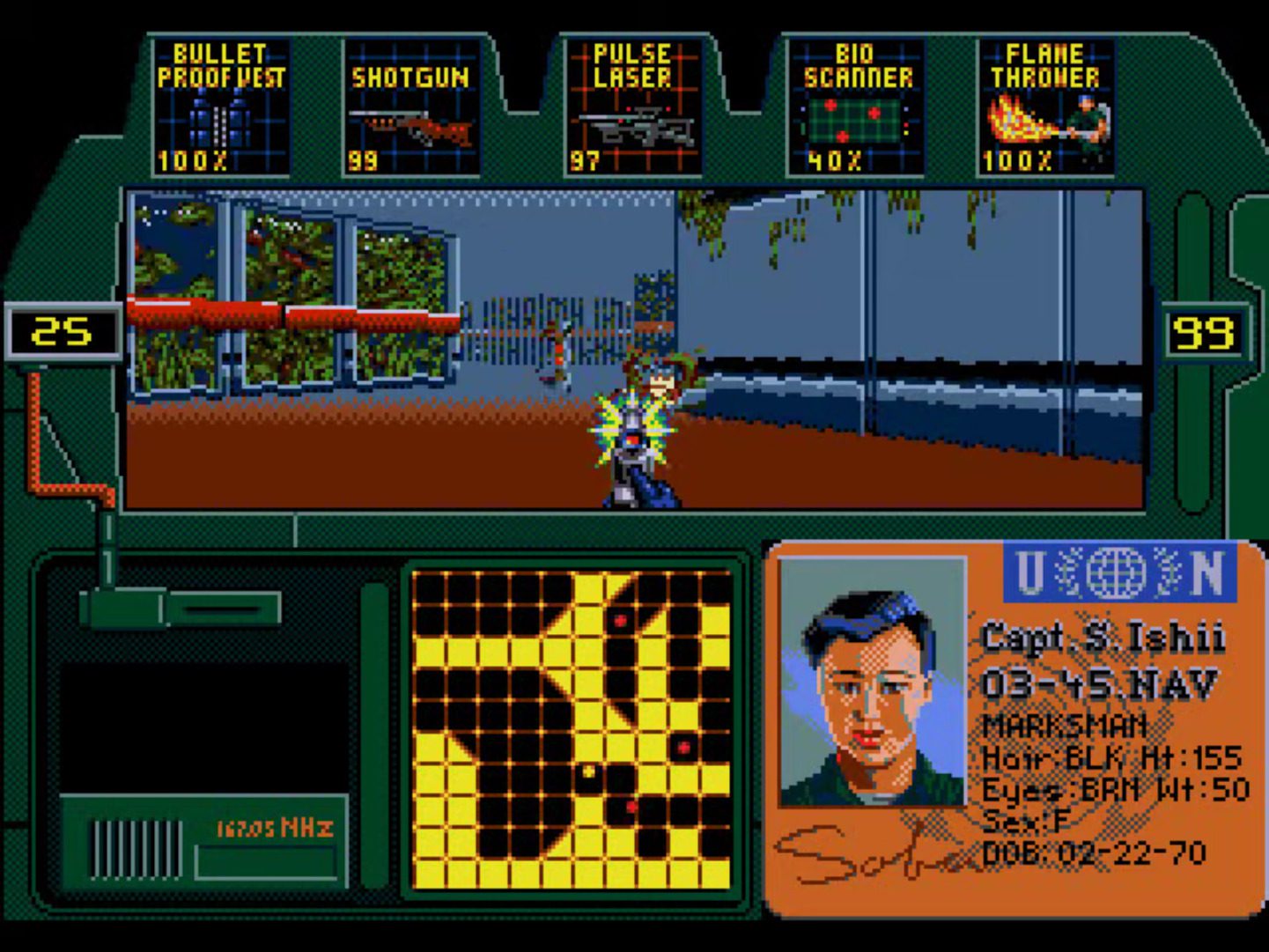 One glance at the screenshots and you can tell instantly that concessions had to be made. The actual gameplay takes place on a tiny fraction of the screen. It competes for space with a massive I.D. card that gives information about your character. I assume this is just in case you need to buy liquor. There’s also a map that shows off how grid-based the level design is. To their credit, they have 45-degree walls, which Wolfenstein did not have, but the grid is still pretty obvious.

The graphics also have this weird vertical streaky quality to them. I assume this has to do with texture and sprite scaling, but I’m not a doctor. All I know is that I’ve never seen anything quite like it in a video game, and it’s almost distracting.

At the same time, the technology is pretty impressive beyond just being an FPS on the Genesis. There are attempts at simulating room-over-room, which was sort of the holy grail of early first-person shooters. Doom didn’t even have a very good way of pulling it off, so it’s impressive to see here.

There are also subtle touches that are nice. In the skyscraper levels, as you descend its floors, the background gradually shifts perspective to match. There’s also a gun with a laser pointer that changes with depth. 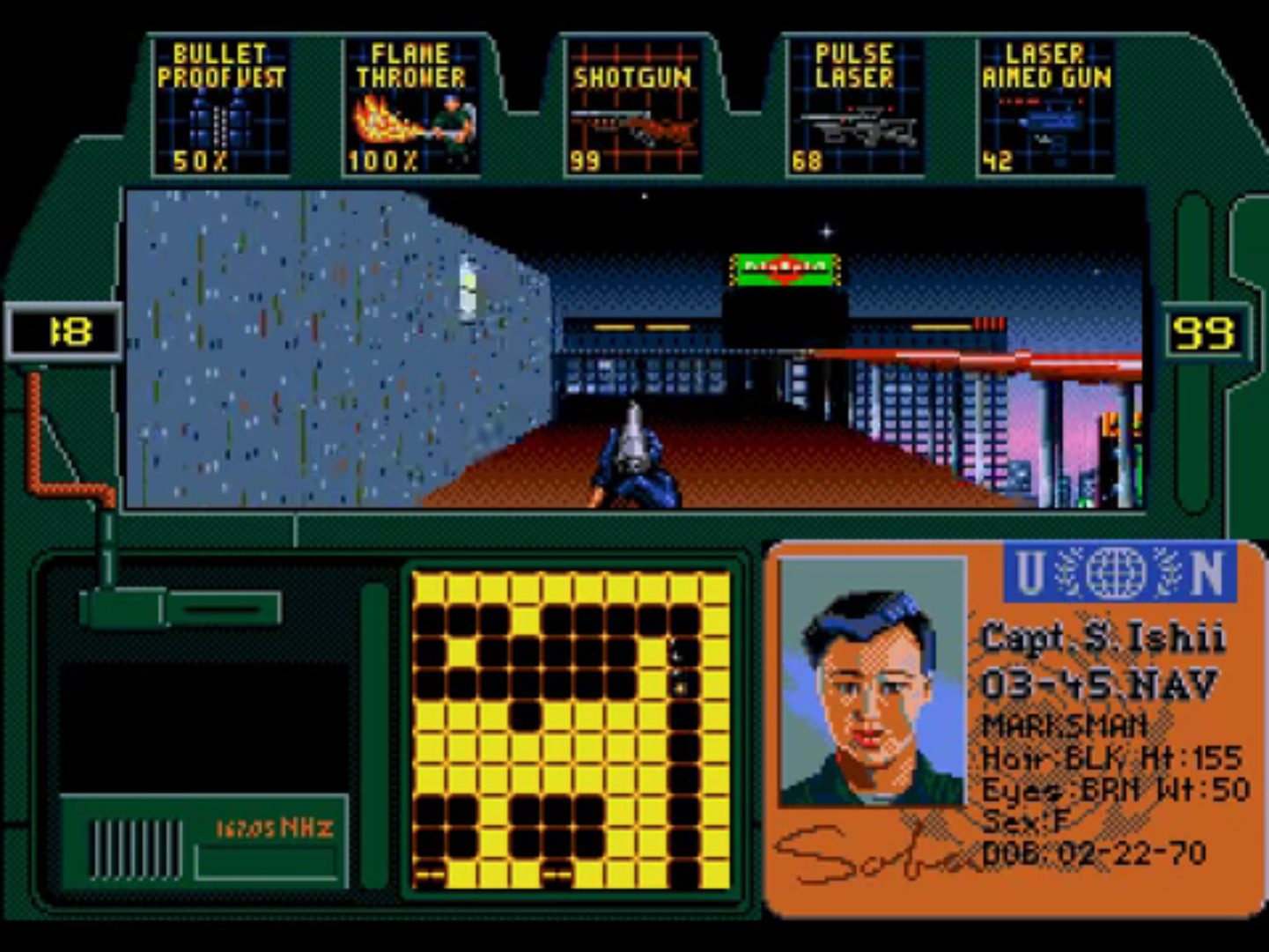 The price is that the framerate often chugs. Let me give you some advice: don’t pick up the flashlight or night vision goggles. Not only are they mostly unnecessary, but they suck the FPS into the depths. Well beneath tolerable levels.

There are other oddities in Zero Tolerance that you might not notice immediately. Enemies only become hostile if you’re looking at their spot on the grid. You can walk right past certain dudes, and they’re too polite to speak up unless you make eye contact first. It’s an obvious way to keep the actor count down in a stage by not spawning them unless you can see them, but it’s kind of hilarious.

It’s also not that great in terms of gameplay in general. Don’t get me wrong, it’s a perfectly acceptable first-person shooter, but you can smell the technical limitations. The levels are decently varied, which is a nice change from Doom’s more abstract approach, though they aren’t quite as dynamic. It’s just the shooting never feels great, and there’s not much to the game aside from that. 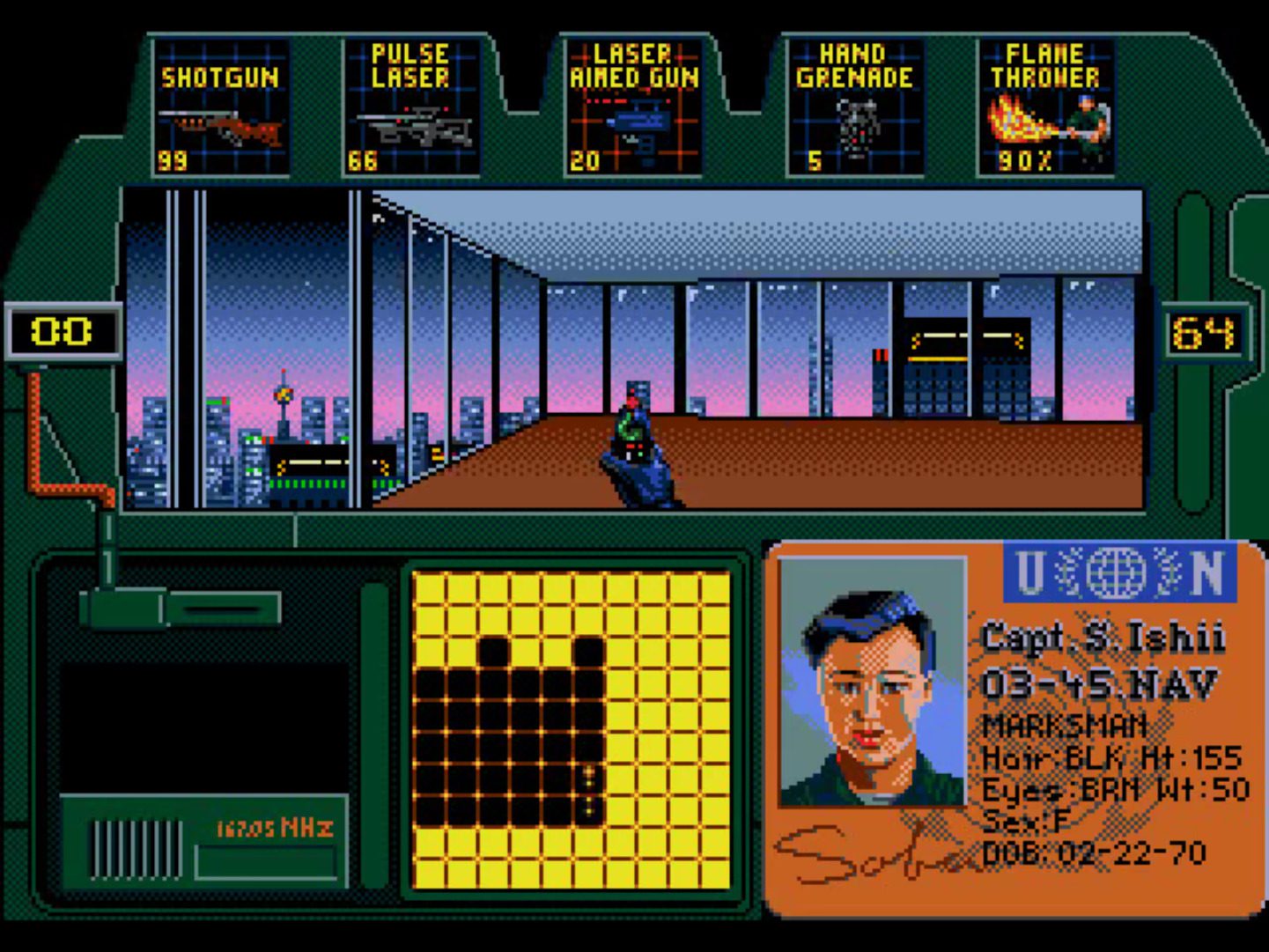 One of the coolest technical feats the game pulled off was allowing 2-player co-op through the use of a special cable. The cable really just attaches the second player ports in each person’s Genesis, essentially just transmitting their button commands to the other player’s console, but it was a neat way around the lack of network play or split-screen.

But that’s all that is really left for Zero Tolerance. It’s a game of technical trickery. It’s interesting to see on the Genesis, but in the wider context of video games today, it has nothing to offer. Don’t get me wrong, Technopop did some amazing things with this title. Compare it to 1993’s Jurassic Park on the SNES, a similar tech-focused FPS, and it’s even more impressive. But that might only mean something if you’re a nerd for pre-polygon shooters like I am.

Technopop created a sequel called Beyond Zero Tolerance, but it was canceled by Accolade. They later released a ROM of it. It’s far from finished, but it’s neat to see where it was going next.

Rumor also has it that the Genesis port of Duke Nukem 3D used the Zero Tolerance engine, but that has yet to be proven. Take it with a grain of salt, as it’s based on internet ponderings, but that certainly isn’t the Build Engine running on 16-bit hardware.