Sin & Punishment is a fun topic for quite a few reasons. The most important is that it’s a joint effort between Nintendo and the legendary developer, Treasure. If you’re familiar with Treasure, you know you’re in for a captivating trip. There’s also the fact that it was a Japan-only release during the N64’s sunset days. Thankfully, it was later localized on the Wii and Wii U Virtual Console. Then it mystifyingly got a sequel on the Wii.

We’re talking about the original, though. The Japanese swansong for Nintendo’s 64-bit monstrosity (they didn’t receive a release of Conker’s Bad Fur Day). It takes some explaining, but it’s a fun ride, so buckle up. 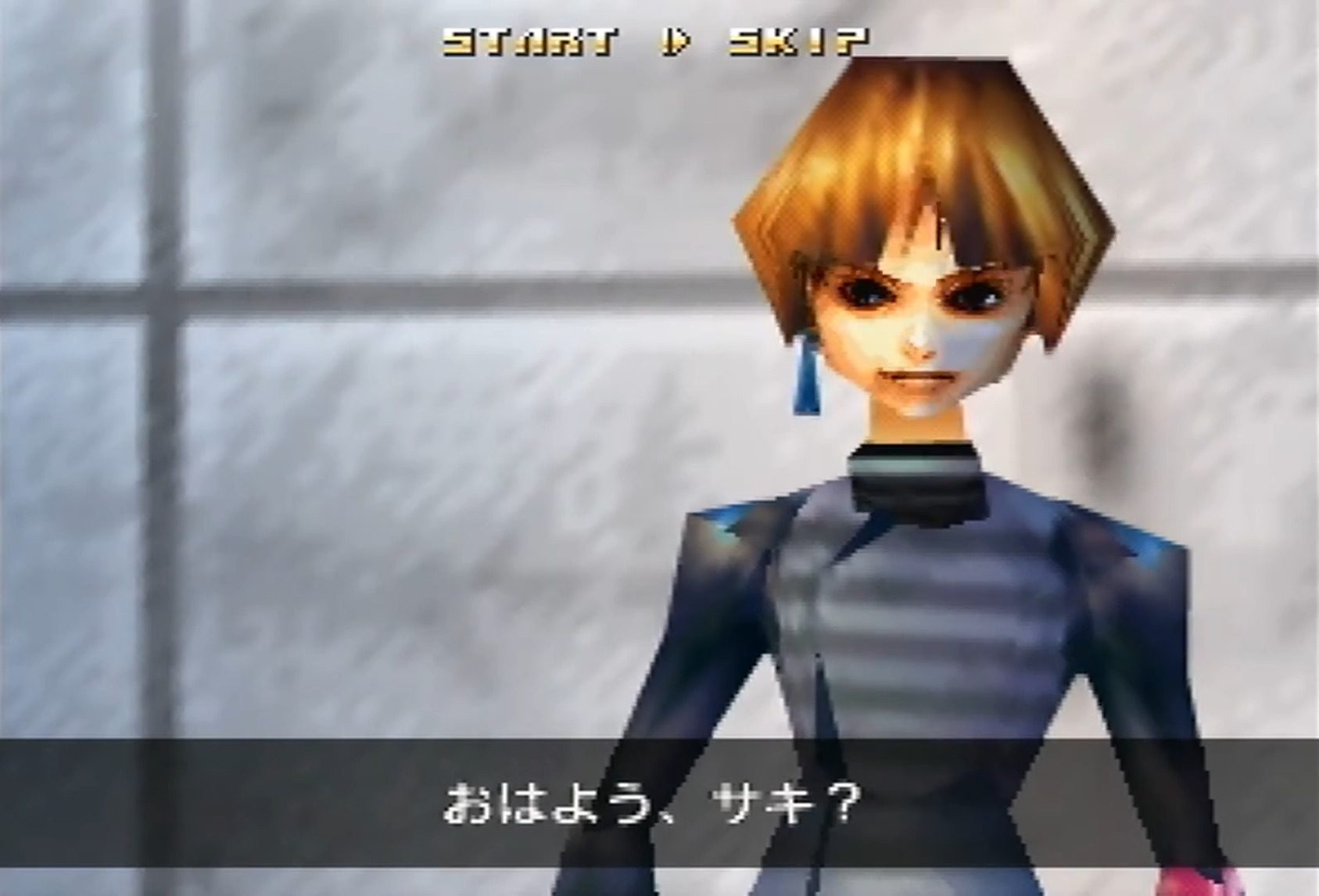 If you’re unfamiliar with Treasure, let me just list off a few of their accomplishments: Gunstar Heroes, Mischief Makers, Ikaruga, Bangai-O, McDonald’s Treasure Land Adventure. It’s possible you’ve played none of these games, but if you have, you’ll recognize them as being beyond description and compare. Whether or not you actually liked the games is another story, but in terms of creative direction, they’re unparalleled.

Sin & Punishment sits nicely under that umbrella. Let me see how plainly I can explain it: it’s a story about a race of insect monsters that were bred by the Japanese to replace livestock as a source for meat. The meat monsters, known as the Ruffians, go berserk and start overrunning the country. The Armed Volunteers come in to set things right, but they’re apparently jerks because they’re bad guys too.

You play as two youngsters, Saki and Airan.  They are partnered with a person named Achi whose blood turns people into giant monsters. You’re also down for killing anyone, Armed Volunteer and Ruffian alike, because I guess you have all the answers for fixing things. 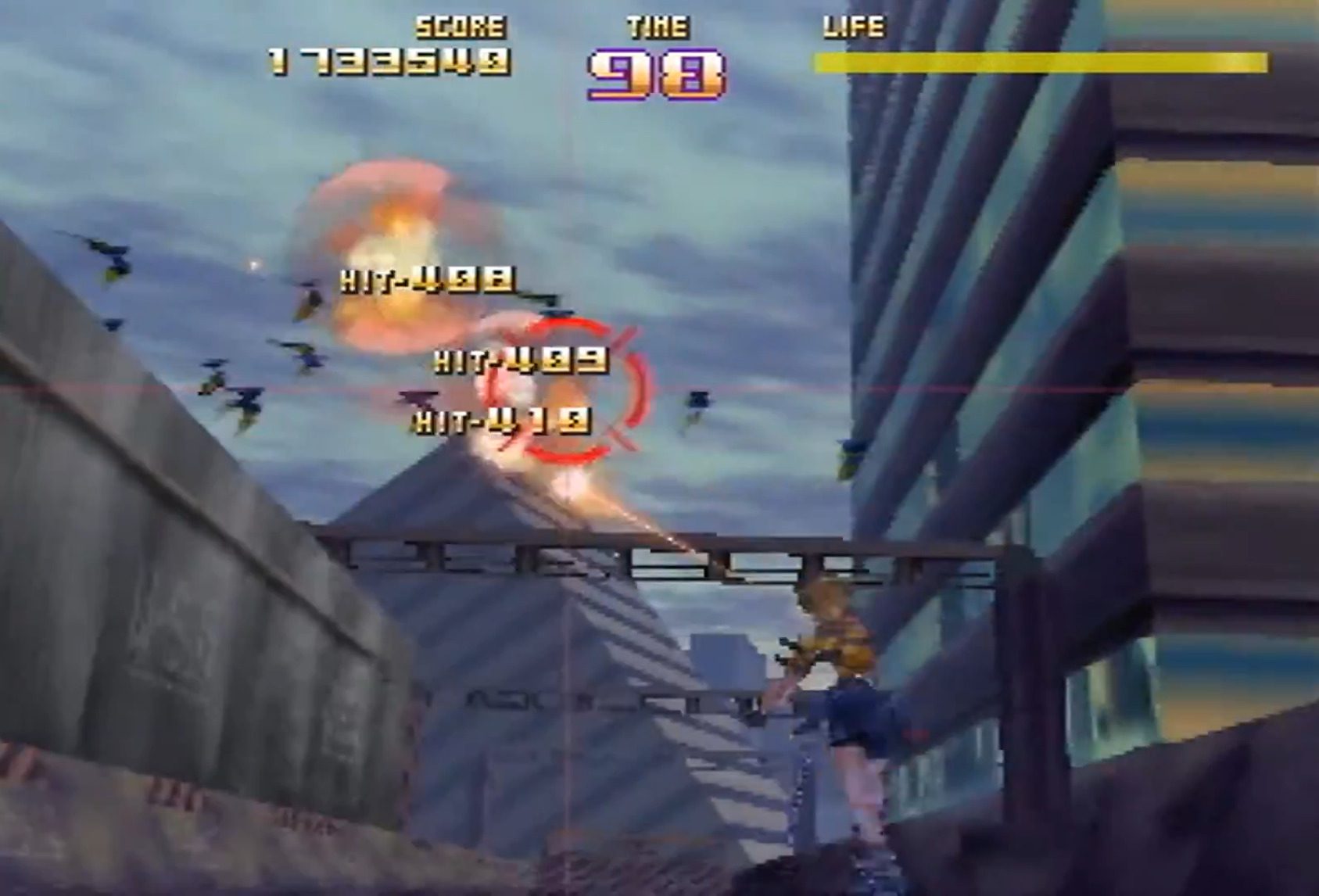 Sin & Punishment is a mix between the rail and Cabal-shooter genres. Its behind-the-back style of gameplay reminds immediately of Space Harrier, but the controls feel more like the Landmaster sections in Star Fox 64. What feels unique about it is that you run across the ground and have both ranged and melee attacks. You, therefore, have to dodge foreground attacks while dishing damage at the same time.

That signature Treasure weirdness? If you couldn’t tell by the plot, it’s here. From bosses that throw their grunts at you, to assaults on entire fleets of battleships, to just battling the Earth itself. It’s easy to get lost in Sin & Punishment. I’ve practically rehearsed the story at this point because figuring it out on the fly can take some concentration. It’s appropriately bizarre. 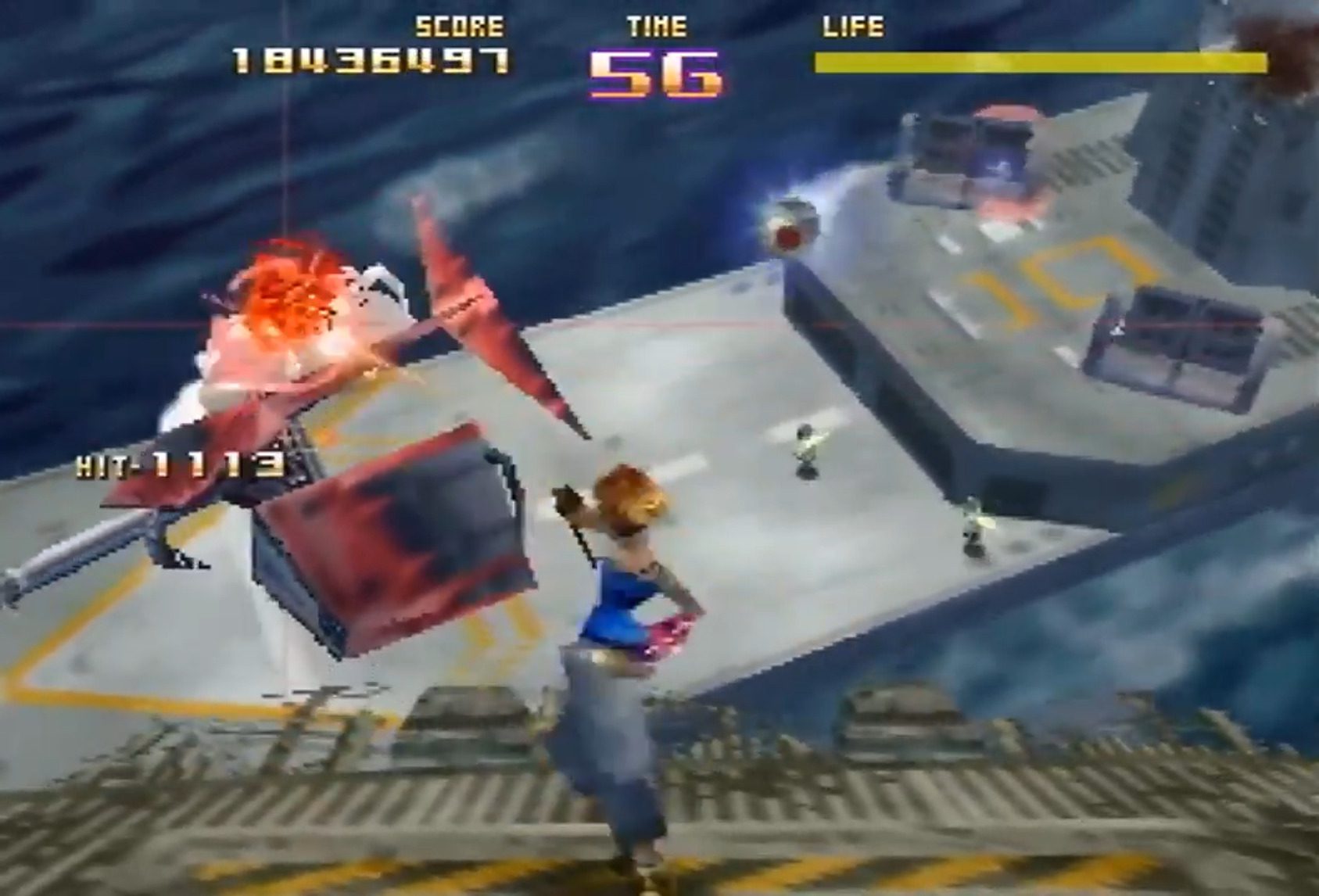 What else is bizarre is the fact that it never came to North America. Okay, so 2000 wasn’t the best time to be releasing a game on the N64, but Sin & Punishment needed next to no translation. Mysteriously, despite being set in Japan and featuring Japanese characters, the dialogue is completely in English! Moreover, it was obviously done by western voice actors because there isn’t a hint of an accent.

Maybe it was deemed too out there for North American audiences who were already looking forward to the next generation of consoles, but at least we got it eventually.

It seems like some late-stage concession had to be made. The control scheme was originally designed so you had one hand on the D-pad and another on the stick; working the N64 controller’s unique 3-prong design like it had rarely been done before. However, in the finished version, you can absolutely play with one hand in the C region and another on the stick. It’s not any worse because of this, but you can tell someone reluctantly agreed to change their vision to accommodate players who had grown accustomed to one manner of grip. 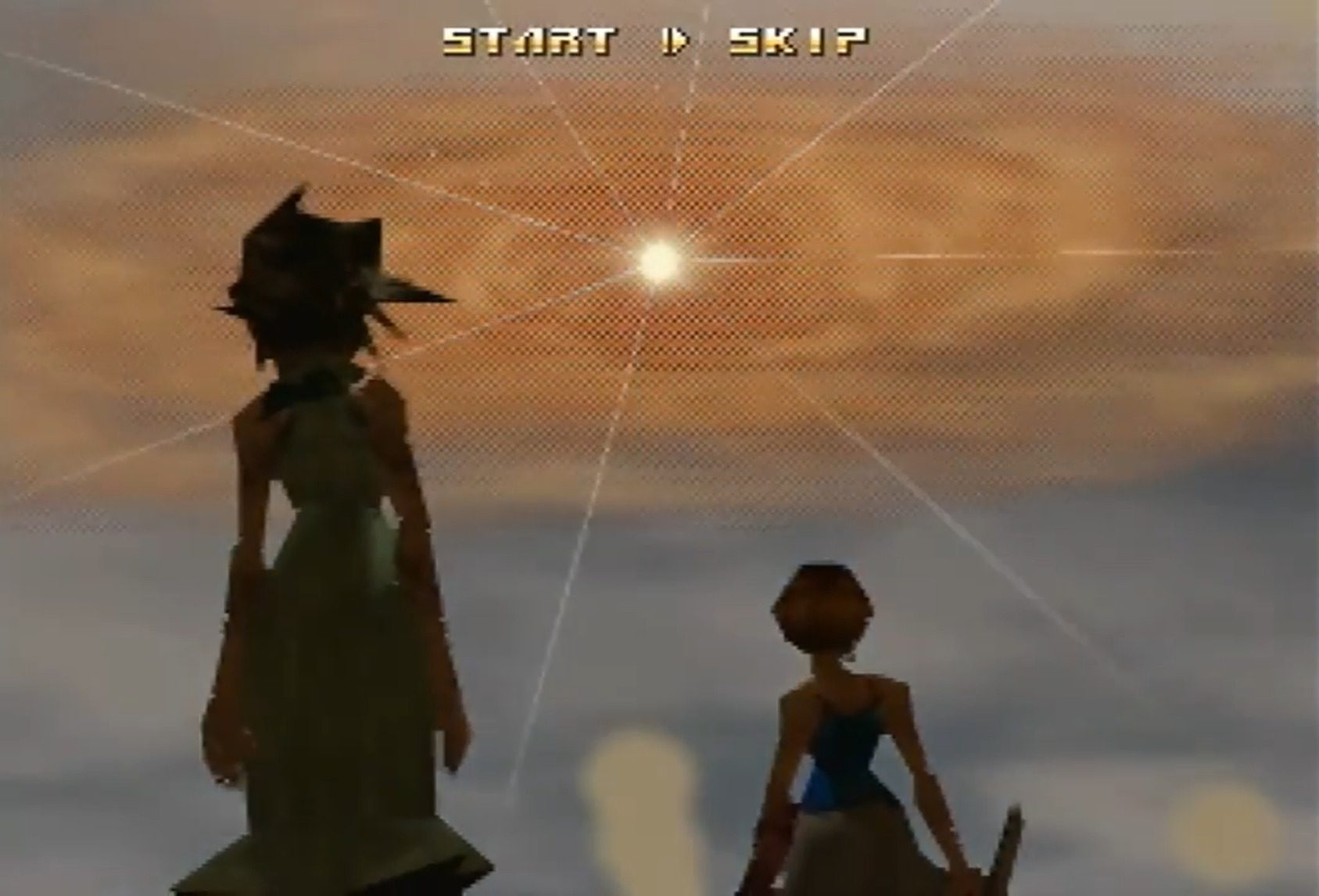 The biggest concession, however, is with the difficulty. The original title of Sin & Punishment was Glass Soldier, and this was largely due to how fragile the protagonists were in early builds. However, as legend has it, the director from Nintendo, Hitoshi Yamagami, found early builds too difficult. He debated with the team at Treasure to lower the difficulty, to which they said if he wasn’t up to the task of playing the game, he didn’t belong on the team.

Yamagami got his way, but Treasure may have had a point because Sin & Punishment isn’t a difficult game in the slightest. For every 100 enemies you kill, you’re given an extra life, and the game throws a constant deluge of them at you. As a result, you’ll rack up a surplus pretty quickly, and dying just means continuing from the game’s common checkpoints.

It’s also staggeringly short, clocking in at maybe over an hour. With no challenge to offset this, the best you can do to add longevity is try for a high score. That’s not something I’m interested in, personally. However, it’s an easy game to crack open every once and a while to fill part of an afternoon. 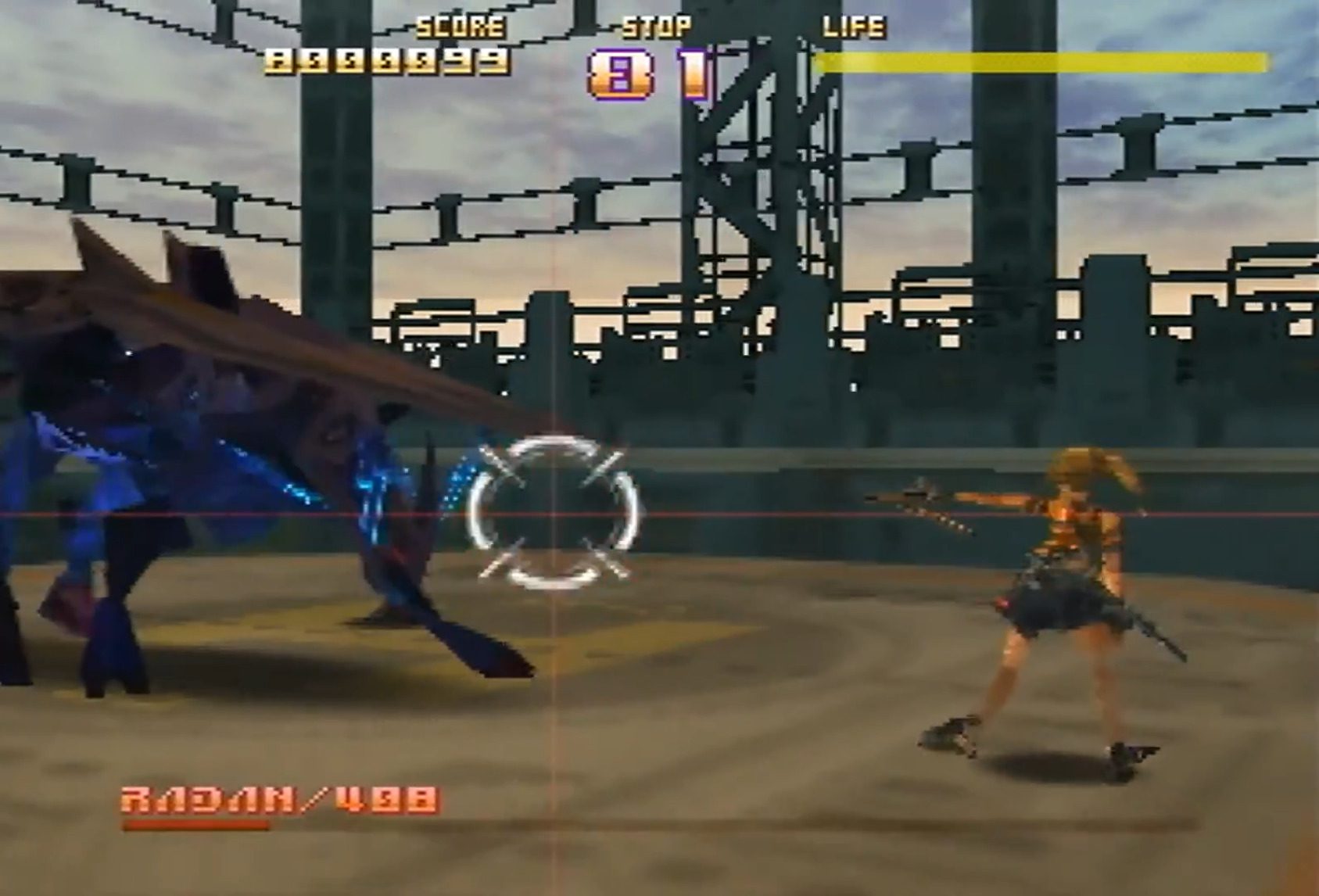 Because of its unfortunate release window, Sin & Punishment wasn’t much of a seller. On the secondhand market, a used N64 copy can go for north of $60. You can still get it on the Wii U Virtual Console, however, which would be the way to go.

Despite this, a sequel was commissioned on the Wii and released in 2009, Sin & Punishment: Star Successor. It was a strange move for Nintendo given the sales of the first game. They were also trying to prop up the Wii as a family-friendly console, which Star Successor isn’t quite. Treasure is also not really a developer known for their sequels. I’m not complaining, though. Sin & Punishment is a game that deserved a sequel, and while we’ll likely never see another one, it was nice that the team got to revisit the themes and universe.

Now, if I could ask for another miracle, could Nintendo please re-release both of these games?