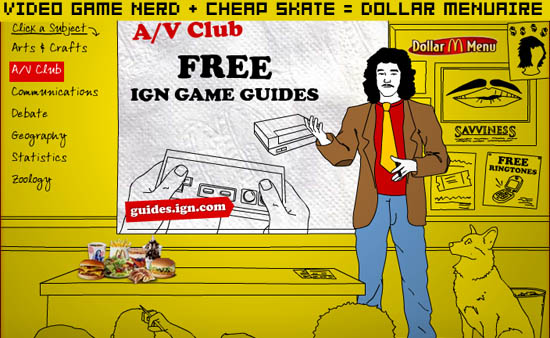 There’s enough brouhaha about in-game ads that you’d thing we were debating something truly controversial (OMG! There’s ads on TV! How revolting! WTF! There’s ads on my radio station! Damn them!), so I won’t go there.  But lately, I’ve noticed a reversal. I’m talking about ads designed to appeal to gamers. For products that have nothing to do with games.

I’m sure the Dtoid army is about ready to revolt and burn down the tower, conjuring images of a Frankenstein movie. How dare advertisers invade our inner sanctum. And by “inner sanctum,” I mean the basement of our parent’s house. But I gotta admit, I’ve seen a couple of ads recently that tickled my funny bone.

Now, first of all, I want to just point out that the latest McDonald’s campaign — which focuses on the “Dollar Menunaire” — is overall pretty lame. The concept of reaching out to cheap ass mofos seems misguided, as if we don’t already think that Mickey D’s food is already bottom of the barrel fast food (is there such a thing as Grade D meat?). Our sister site, Pop Rox USA, goes into more detail on that.

But the latest ads targeting gamers were pretty darn funny. And they used the Konami code. That’s pretty cool. And they offer up some free strategy guides as well, which is pretty nifty too. The problem? They get the Konami code wrong…

I will say this — if companies really want to target gamers, then they need to speak our language. And when they do, you can bet we appreciate it. Like the World of Warcraft spoof that featured the Toyota Tacoma. Nit picky gamers may note that there’s no such things as “explosive arrows” in WOW, but the ad did work. On the flip-side, you’ve got Toyota making the crappiest XBox LIVE Arcade game alive, Yaris. A shooter that uses a car. Wha?

So this is really a call out to advertisers who see dollar signs when they hear how gamers are now a hot commodity — if you really want to speak to us, you better know who we are. And to all you gamers, while we pretty much better brace ourselves for the inevitable onslaught of ads geared towards us, at least feel proud and almighty in that we are finally considered a prized demographic among advertisers.

And not just from energy drink makers, and the US Army, either.