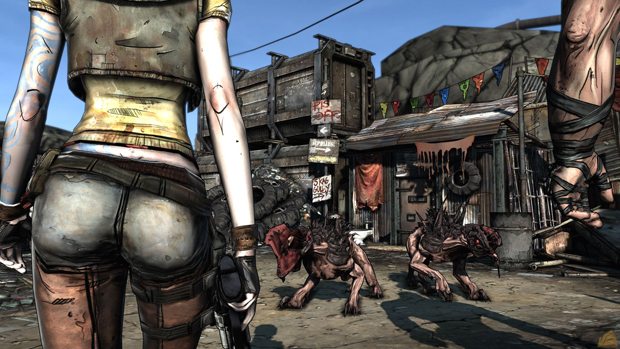 Not only will Borderlands be releasing for download on Steam, Steve Gibson of Gearbox also told us about a couple additional features that will be exclusive to the PC version. Given the amount of unique weapons in the game, you’ll probably end up with some sweet-looking gun that none of your friends have. Want to show it off? You’ll be able to export item cards to .jpg files. Additionally, the PC version will come with timedemo benchmark software, which admittedly isn’t needed for the console versions, but will be a nice touch.

Steve also went on to say that those with high end PCs will experience the best Borderlands graphics of all the platforms. Finally, and what actually makes me the happiest, is that Steve promises that the PC version will have menu and inventory systems that are specifically designed for use with a mouse, the lack of which has been one of my bigger complaints about recent multi-platform games. Steve states that Gearbox is treating the PC version very seriously, and from what he’s told me, it sounds like Gearbox on the right track.

Final details for the Steam release are still being worked on, but the Steam pre-order date will be announced as soon as it’s available. For those of you with a 360 or a PS3 and a decent gaming PC, which platform will you be getting the game for?