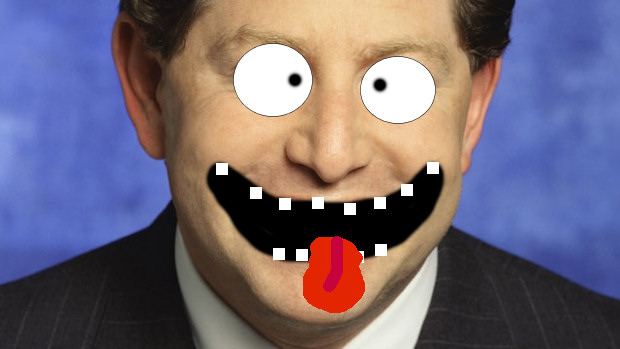 Evil Activision CEO Bobby Kotick has been shooting his evil mouth off again, upsetting gamers with his evil opinions. This latest is aimed at those who want original IP, with Kotick arguing that people like sequels, so why bother doing anything new?

“A small segment of very vocal gamers say everything has to be new and different every year,” explains Kotick (evilly). “Actually, people are happy with existing franchises, provided you innovate within them.”

As much as I’d like to disagree with Kotick, I can’t do so in good faith. What he says is true, people are happy to accept sequel after sequel after sequel. However, I wouldn’t say that’s a good thing, more a problem with the mainstream consumer. Just because a “small segment of very vocal gamers” believes something, that doesn’t mean they’re wrong.

The problem with Activision is that it sees zero merit whatsoever in an original franchise that isn’t whored out with endless sequels and spin-offs. There is room for both original, standalone titles and huge franchises, but with Activision, you need to guarantee that your game will see at least ten followups or it isn’t interested. That, I think, is Kotick’s biggest problem.

Y’know, that and his blood pacts with Satan’s grim wizards.