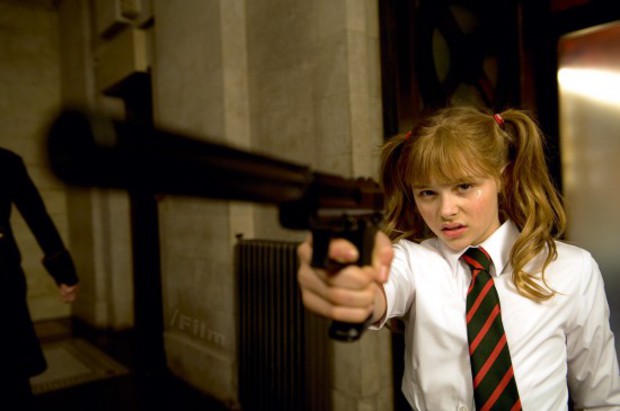 As the force of nature at the heart of all the film's best scenes and action, Hit-Girl's presence understandably overshadows many of the other characters, despite several of them being perfectly accomplished in their own right. Hit-Girl's on-screen Big Daddy is closest to matching her for entertainment value, giving Nicolas Cage a perfect stage for his love of off-kilter performances, his stunted delivery here somewhat reminiscent of Adam West, albeit with a second screw loose. He and Moretz have great chemistry together and bring to life the heightened dialogue that might have felt embarrassing and smug coming from less aware performers. Christoper Mintz-Plasse is less showy but equally effective and brave in taking on a role that in many respects is the film's most despicable. Moving convincingly between calculating Iago and insecure teen, it's a performance that proves his credentials for moving on from his McLovin typecast. Aaron Johnson and Mark Strong fare less well, although this is more down to their roles barely moving beyond the geek hero and mobster villain stereotype than any notable deficiencies on their part. Lyndsy Fonseca as Dave's love interest Katie does nothing but be girly and look gorgeous, which is thankfully all that the role asks of her.

The heavily contrasting nature of the characters is at the core of the film's biggest problem, which is that it seems constantly unsure of what it wants to be and what it is trying to say. Mixing the comic book world and real life isn't a bad idea for social commentary, but is done with no apparent thought process. Dave wonders why no-one has ever tried being a superhero before, yet the distinctiveness of his choice to become Kick-Ass is undermined by Hit Girl and Big Daddy being out in costume almost constantly. There does not seem to be any reason in certain characters being taken from the comic world and others portrayed more realistically: in the case of Mark Strong's Frank D'Amico, he's neither human enough to be realistic nor enough fun to be a supervillain figure. If the film's point is that only a lunatic would dress up and fight crime, I hardly think that's a particularly prominent social question worthy of any exploration. When Kick-Ass becomes a YouTube sensation, the film touches on the subculture of ephemeral internet phenomena and the online generation's lust for sensation and violence, but never goes further than acknowledging its existence. Attempts at humour, apart from one good gag with a gang of bullies challenging an un-costumed Hit Girl for her lunch money, also fall flat.

When the film sticks to what comic book movies have often done well, which is deliver spectacle, it lives up to its name: Big Daddy's attack on D'Amico's warehouse is shot in one long take and is one of the film's highlights, while Hit Girl's blend of kung-fu and gunplay are amongst the most exciting, funny and well-executed (pun intended) sequences the genre has delivered so far. Vaughan's refusal to censor the film's violence make his actions scenes more powerful and consequential than those in more cautious releases, yet doesn't overdo it in the same tacky and thoughtless manner as Zack Snyder's brainless Watchmen adaptation.

Like many movies of this type, my feeling is that Kick-Ass will find its biggest fans amongst those who share its passion for comics. Taken as a film on its own terms, it's an entertaining action picture let down by mundane comedy, an excessive reliance on an appreciation of comic book culture and the tonal and thematic identity crisis running through the story. Its only real success as a commentary on superhero movies is in being so typical of both the best and worst characteristics of the genre it seeks to satirise.

A Curious Thing: Amy MacDonald (Music)
#Community
Login to vote this up!