Change We Can Believe In: The New Politics of Gaming essay + Doctor Who review 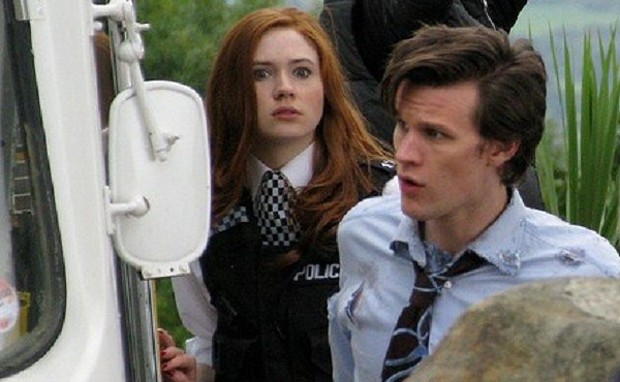 If the show takes a while to find its feet, the performances of new leads Matt Smith as the Doctor and Karen Gillan as companion-to-be Amy Pond dispel any lingering shadows of their predecessors from the moment they take their first steps on-screen. Smith mixes the mania and bravado of youth with the confidence and authority of age, glued together by a streak of unearthliness that Tennant's Doctor sometimes lacked. He rules the screen whether at full Timelord momentum or simply sitting over a dining table eating fish fingers and custard with a star-struck little girl. Karen Gillan makes a more low-key entrance, but not only is hilarious and gorgeous (challenging Freema Agyeman's Martha and Nicola Bryant's Peri for most lovely Who companion) but touchingly subtle in her hints at Amy's long-standing insecurity at losing everyone she's trusted in between her amazement at the Doctor's tardy but mercurial return.

For all its early flaws and below-par new titles sequence and special effects (perhaps a result of the BBC's severe recent budget cuts), 'The Eleventh Hour' shows plenty of promise that Steven Moffatt's reign in charge of Doctor Who can grow beyond the legacy left by the previous team. Matt Smith not only sweeps any naysayers' doubts about his suitability for the role, but gives as confident and exciting a debut as any previous incumbent, sparking of Karen Gillan's companion Amy with the chemistry of a long-established screen double act. As Smith so appropriately introduces himself, we know we can trust him: he's the Doctor.

A Curious Thing: Amy MacDonald (Music)
#Community
Login to vote this up!