10 things you didnt know i would know about me. 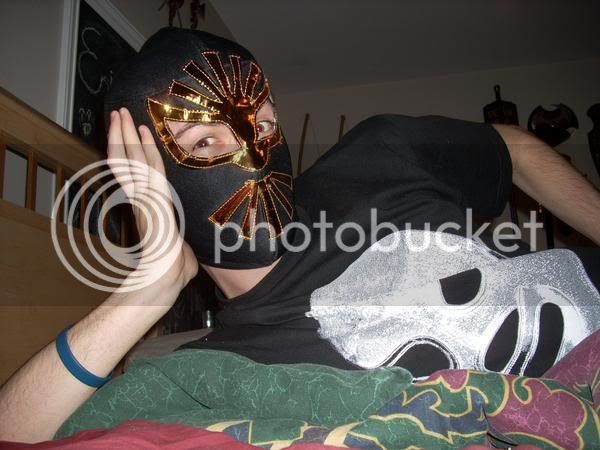 Goddom. So this is the first post ive done in a long time, ive been quite the busy lil luchadore these past few months! School kicked back up, works been a bitch, I got this new thing called "a life" and have been busy trying to figure it out, etc,etc

(Look for my review of Left 4 Dead, Sonic Unleashed, Persona 3 FES, a second hand review of P4, and the reasons why i havent updated with any news on my STH06 conquest)


And i noticed this little fad going on with all my fellow d-toiders, its seems to be sweeping the C-blogs like a strange new strain of airborne virus... So i decided to take a deep breath of it and jump into the madness myself!


1. A year ago i housed over 15 reptiles in my house (i dont breed reptiles). I work for Petco, and a lot of people were dropping off their reptiles. I had an open heart and an one bedroom apartment, so i would decide to take them all in... Sadly however the load became too much and my house became more of a half-way house than a permanent home. Luckly for me i found great homes for most of them and still house 3 of them to myself.

2. I have nearly been killed 5 times. Once when administered the whooping cough vaccine my throat collapsed due to fail. When i was 3 i followed a ball into the pool and nearly drowned. When i was 6 I dehydrated and nearly suffocated in a ball pit at Peter Piper Pizza in Arizona. When i was 14 i decided to jump into a lake with all my clothes on to grab a floating toy for a crying child, my pant leg got caught on a branch and somehow i got dragged under. And when i was 16, i was on a golf course when lighting struck 10 feet away from me. Yeah the reapers scythe aint as sharp as it used to be, lets put it that way.

3. I am a trekker, yep. Judge all you want, but dont hate until youve tried it.

4. I won the surfing pikachu contest out of a nintendo power when i was a kid and thought i was the hottest thing on the planet. Seriously they made me send in my Pokemon Yellow cartridge and gave me a pikachu WHO KNEW SURF! KING KONG AINT GOT SHIT ON ME! Not only did it know surf, but it gave me access to this secret little minigame in this beach house. I played the fuck out of that minigame. Eventually everybody got it due to Pokemon Stadium, but lemme tell you- being able to brag about that shit during the heat of the pokemon phenom. Absolutely amazing.

5. I've wanted to be: a cop, a paleontologist, a cartoonist, a writter, a director, an actor, a socio-cultural anthropologist, a psychologist, a video game director, and a wildlife conservationist.. and that was all just last week. AND I WILL BE THEM ALL!

6. I've been in several short films for my friend who is attempting to get into Cal-Arts. I pray my terrible acting isnt the one thing that stops him from getting in. (they are on the youtubes but im not sure if i want to post them here)

7. I am a huge Godzilla fan. Seriously if i had the money i would collect Kaiju shit, but the toy companies jack that shit up! I cant afford $90 for some 12 in vinyl figurine that looks like something sold at KB Toys! But something about the terrible acting, rubber suits, and predictable storylines just gets me all hot and bothered under the collar..

8. I used to know every line in Jurassic Park by heart. Seriously, i could be anywhere and just start reciting it from beginning to end. It was disgusting, i used to watch that movie at least 5x a week when i was 12.

9. Despite my love of the Pokemon franchise, i still have yet to ever completely fill out a pokedex. I know i fail at life...

10. I have an unhealthy love for all things grotesque. Mostly the skeleton. Human skeletons, animal skeletons, supernatural creature skeletons, you name it (yes even exoskeletons) I am infatuated with it. Dont know quite why but i have been my whole life!

So there you go, 10 things you didnt know about me or already did and now wonder why did i even care to open this blog and read this boring shit... I love run on sentances..
#Community
Login to vote this up!