Gyros
Gyros have the highest floor of any food that I have ever eaten.  For those unfamiliar with the floor and ceiling concept, what I am getting at is this - the worst gyro that I have ever had was from my work’s cafeteria.  It was 4 slices of frozen, wafer thin, pre packaged, Sodexho made beef and lamb, on a store bought pita with industrial tzatziki sauce.  And it was still pretty good.  It almost doesn’t matter where you get one of these bad boys, it will still be, at worst, acceptable.  At the Iowa State Fair I had heat stroke one year.  I got a foot long gyro, a 56 oz Mountain Dew, and I was back in the game. Love these bad boys.

When I moved to my house in Des Moines (#Humblebrag?) I would continually pass this shack of a building.  I think before it was a restaurant it was a garage.  It has, at best, five parking spaces, and is knee deep in what I joke as Chinatown - its about a block long of Asian stores.  I figured going there I would either get food poisoning or some of the best food ever, with nothing in between.  I have to say?  It was amazing.  I love spectacles when eating, and seeing a hanging meat selection of whole ducks, mostly whole chickens, entire pork bellies, and multiple pork heads behind a glass window was something else.  As you order, a 5-foot-nothing tall Korean lady takes it out of the window and uses a cleaver larger than her head on a cutting board that is worn so deep in the middle you could serve soup out of it to carve the entire order into bite sized pieces in five seconds.  It's beautiful.  As for the food itself, BBQ duck is always something wonderful, but the pork is where they shine.  They have crispy pork and sweet pork, and the crispy pork is just magic - pork belly with a shatter crunchy exterior, a five spice and more flavor blend, and enough fat to lubricate your throat for a week.  As a side note, this place is also the best fried rice in town because you can taste the wok smoke on the rice.

I like all kinds of pizza.  From a basic New York Slice to a Froot Loops breakfast pizza.  In Des Moines there is a place called Fong’s that makes Asian Fusion pizza such as Crab Rangoon, Kung Pao Chicken, and the one listed above, Honey Garlic on Alfredo.  There is a small hipster bar across from their downtown location that I used to get absolutely loaded at and waddle across the street to get late night slices, and my favorite was always the honey garlic doused in Sriracha.  It was a homemade sobriety test - if it was spicy, I wasn’t toasted.

In my home town in Chicago land, there is a good independent place that has peanut buckets with shells on the floor, and a thin pizza with Italian Beef where the crust is made with beer, and that is a taste of home right there.  And of course, the deep dish pizza will always have a place in my heart (probably literally, with how bad they are for you).  You can’t take away or detract from my casserole inside a biscuit baked inside of a greased up pie tin.

“A survey found that of 48 different recipes, the only common ingredient was chicken.” Chicken  in some kind of red sauce with tons of flavor, spices, and maybe yogurt.  Always a pleasure to eat, and part of the experience is finding the one that you like the most.  I often ‘chat’ a little bit going to our local English style pub and getting chicken fingers, chips, and some tikka sauce to dunk it in.

What I said about Chicken Tikka is doubled for pho - finding your favorite is all part of the joy. This dish itself is pretty simple - broth, rice noodles, meat, and a choose your own adventure platter of additions: bean sprouts, cilantro, jalapeno, lime, fish sauce, hoisin sauce, and sriracha, meant for you to customize how you like the dish.  The differences in the broth’s makeup, the spices, and the meat itself can make one restaurant stand head and shoulders above others.  For Des Moines, A Dong is the best to me, but there are probably dozens of places to get a good bowl, plus some great Bahn Mi.  A good layer of fat on top of the broth with some good noodles leaves a fully drinkable soup. Not to mention that the sizes make a mockery of western portions.  You could actually swim in a medium sized bowl.  God help those who order a large.

My favorite part of the meat with any good steakhouse or barbeque is usually the crust.  Burnt ends, if done right, are all the fatty crust and bark you could want.  If you want to get beans or coleslaw or whatever, fine, but each of these are certified flavor bombs.  Unfortunately, the best ones I have had are over in IL by my folks, so Iowa has some catching up to do in this department.

They’re Coming to Get Your Barbara 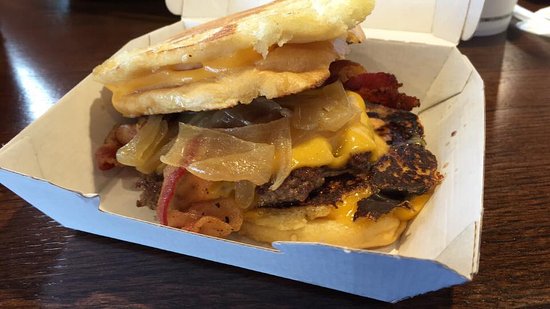 Zombie Burger was going to make this list.  I eat there way too much, and I have eaten there enough where it’s almost a tradition.  Stunt food makes me happy because it’s something I haven’t seen before, but even their ‘standard’ burgers provide me with a good level of comfort and my favorite to return to is They’re Coming To Get You Barbara.  Grilled cheese sandwiches for buns, caramelized onions, burger sauce, bacon, and usually two patties.  Unfortunately their fries kind of suck, but I will forgive it for the tasty burgs.

On average, I tip the highest at pupusa restaurants.  The service usually doesn’t merit it, the ambiance is okay, but I tip at least 50% because every time I get pupusas it feels like I am stealing from them.  They are a fried, cheese/meat stuffed masa cake served with pickled coleslaw and salsa.  They are usually frozen pancake sized in width, so 3 is a pretty good meal.  That being said they can be as low as 2 dollars for 1, so a meal that can fill the heartiest of eaters can come in under 10 bucks.  Its insanity.  They are cooked on a griddle, and usually the masa breaks a little bit letting some of the cheese seep out and get crispy crunch and amazing.  Combined with the crispness of the vinegar, and the spiciness of the salsa, these things are amazing.

Chicago’s answer to the Philly (sort of), Italian beef is thinly sliced beef cooked in its own jus, served on a crusty hoagie with or without cheese, a whole sausage, and pickled veg (giardiniera).  Not only are these delicious, they are everywhere - you can get a good Italian Beef at a restaurant tacked on to a gas station, a food truck, or a brick and mortar store.  There are also these places in Chicagoland that I can’t really describe - they sell gyros, chicken fingers, beef, and hot dogs, and they just kind of exist everywhere.  Combine the tasty beef with some crinkle cut, thicc boi fries, covered in what is legally cheese and its a favorite of mine.  The sad thing is, though, it was what I used to go to because I couldn’t eat other things.  I had an incredibly bad dairy allergy growing up, so anything with cheese in it would destroy me.  So my default at so many restaurants, including pizza places, had to be an Italian Beef, and I resented it.  As I moved away to Iowa, there are hardly any stores that make them, and fewer that do it justice, so I really began to miss it.  As I go back home, I have to pick up at least one of these and it is the ultimate comfort food. 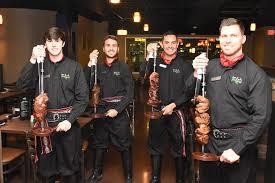 The ultimate meal.  The most decadent way to possibly eat food.  What would you like? Meat.  What kind? Yes.  How much? Yes. I want to get in a 3 piece suit, have a golden watch chain resting across my fat belly, a monocle on my face, and to belly laugh as I tell the servants to bring me still more meat. Its a buffet that comes to you - each cut of meat is carried around the restaurant by the servers, who will cut you off a slice.  Usually there are at least 6 cuts of beef, 2 kinds of sausages, chicken with or without bacon, pineapple rubbed in cinnamon and brown sugar.  You get a card with a green side for ‘more meat’ and a red side for ‘I’m a failure’.  If your card is green, they will never stop offering you more meat.   You start thinking you can keep pace, but after 20 minutes, you have a backlog of a meat mountain five cuts deep.  You wonder if you really need that extra piece of lamb on a sword that the waiter brings over, or if you should save room for the beef ribs on the cart.  You remember your training and take it all, continuing to eat and consume well beyond the meat sweats.  As the servers bring over food, you can ask for specific cuts to be more or less done, and they are all roasted on charcoal spits so the exterior always has an amazing bark.  It can be pricey - perhaps fifty dollars per person - but it is literally all you can eat meat.  Oh, and they also have a salad bar that has thirty other kinds of traditional Brazilian foods, almost all of which are amazing.  This is the pinnacle of opulence, and I love it.