About a year ago, maybe, I found out I had the beetus.  I have been playing around with food stuffs low in carbs and figured I would share some of my favorites that I have found so far. 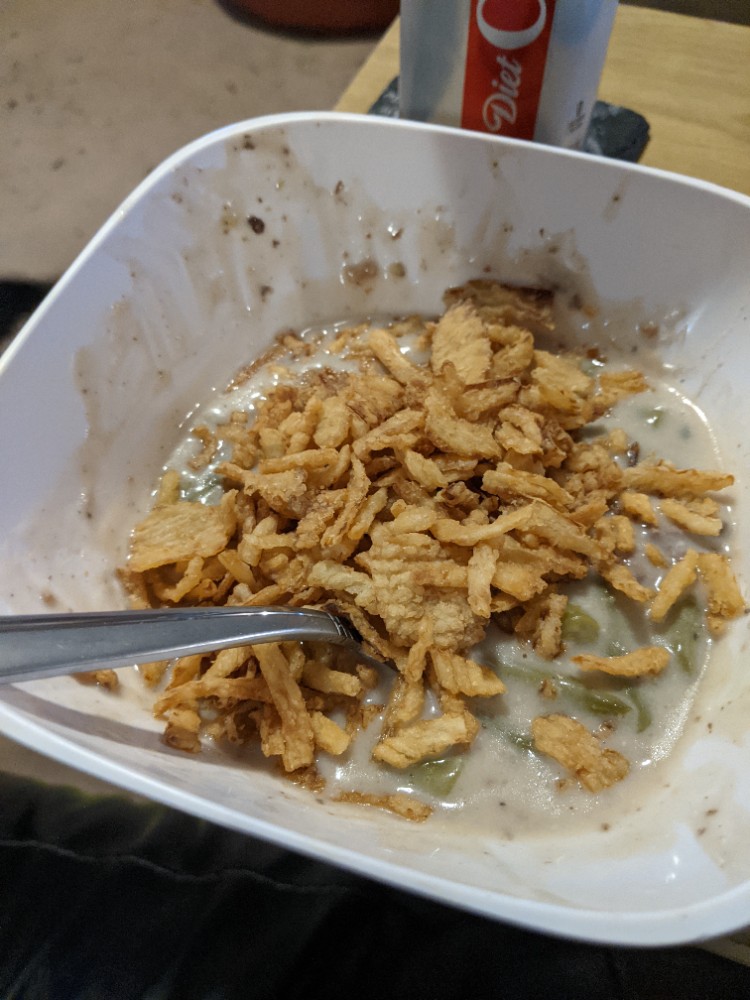 In a dutch oven type pan, brown the ground beef breaking it into small chunks.  Once everything is small and almost cooked, add in all of the spices.  The soup is full of salt, so you should barely be salting anything until the dish is ready.  You do want to add a somewhat generous amount of the soy and worcestershire sauce for the umami flavor.  For a thicker soup, I only fill the can about ¾ of the way full with water.  Let everything simmer for about 30 minutes, then you can serve.  You do want to be tasting and make sure it is slightly spicy, somewhat salty, and very umami.  Cheap, quick, easy, and holds well in the fridge

Preheat a cast iron pan in the oven at 400 freedom units.  Transform your parm into parm dust with either a grater, a food processor, or a spice blender.  Mix the parm, the chicken, and the egg into a dough.  This usually takes about 1 cup of parm to make into anything mildly cohesive.  Take this ‘dough’ and place into the cast iron pan and fill to the edges.  Let this cook in the oven for 20-25 minutes.  Once that is ‘par cooked’, let it rest for a few minutes then you can top it and put it back in.  Note that you are dealing with a chicken cheese base, so your flavors should mesh.  Traditional red sauce (watch for sugar content if you are going for true keto) with mozzarella and pepperoni works, but an alfredo sauce with cheese and red onions is also great.  Bake that for an additional 10-15 minutes, enough for the cheese to get golden brown on top.  Cut out a wedge and get eatin’.  Very filling, and strange how ‘spongy’ the ‘crust’ on this ‘pizza’ is.

First off, rice the cauliflower.  You can use a box grater, a food processor, or a blender.  Every method that isn’t a food processor sucks.  Before putting your cauliflower into a pan, get your stock ready with the spices listed above and have it at a boil.  In a saucepan, add a tablespoon of butter and olive oil, and let them melt over medium high.  Throw in the riced cauliflower and mixed veg of your choice.  Let it cook for a few minutes, until thoroughly warmed.  If you are using wine, add a cup of it in here.  Then add in a ladleful of stock and mix throughout.  Let each ladle of stock boil away until you can see the bottom of the pan when moving the mixture, then add in another ladleful of stock.  Repeat until it stops sucking up the liquid, then add in a final ladle of stock as well as a tablespoon or corn starch.  This should help to thicken in the same way that the rice’s natural sticky stuff would in a risotto.  Add in another 2 tablespoons of butter (or butter substitute), season with salt and pepper to taste and remove from heat.  I was very surprised that the next day this still held up as being a very creamy tasting risotto alternative.

This one is pretty simple.  Cook your chicken - typically dark meat is better for soups and stews, so you can use thighs if you like.  Shred it afterwards, and reserve. Literally everything else except for the cream cheese and tortilla wraps - those are for later - gets thrown into the pot and should be cooked on a low boil for about 30 minutes to let the beans get tender.  Add in the chicken so it doesn’t overcook, and if you are adding in cream cheese, add it in at the end.  Stir to combine and taste for spices and seasoning again, adjusting as needed.  In a frying pan, get some vegetable oil up to about 350 degrees and cut the tortilla into small strips.  Put the strips in the oil, and let them cook for about 2 minutes per side, enough where they are browned and crisp, but if they get too dark they will taste like garbage.  Remove them and salt (preferably with popcorn salt) as they come out of the oil, and serve on top for garnish.  Depending on the jalapenos this can be very spicy, and I was pretty pleased with my low carb nacho garnish turned out for this meal.

If you are using black soybeans, you should soak them overnight the night before by boiling water, dumping in the beans, turning off the heat, and covering.  These bad boys take forever to get tender, so don’t worry about that part.

Cut up the onion and start to sweat that with some oil or butter.  While that’s doing its sweet groove thang, cut up the celery and carrots into rough chunks - these aren’t your soup veggies, so they don't have to be perfect.  Add them to the onion along with some garlic and let them cook until the onion is slightly translucent.  Throw in the pork cut of choice, and fill the pan with water - this is going to reduce into a broth, so don’t be skimpy here.  Add in seasonings - except salt - and bring to a boil.  Keep on a boil for about 2 hours.  After that, the veggies will have given up their goodness, and the pork should be starting to break down, so move the pork to a cutting board, and strain out the veggies.  Remove the pork from the bone, but don’t discard any pieces unless it is a clean bone.  Everything goes back in, likely including beans.  If you are using black soybeans this will take 3-4 hours to get tender, canned beans you can cut down the time to probably 30 minutes.  If you feel your water level is low, you can add more at this point (again, it will evaporate and condense into a broth).  Let everything go until the last half an hour when you want to add in your pretty vegetables cut into bite sized pieces - half an hour should be enough so the veggies aren't just mush - and remove any bones and excess fat.  Basically, anything that isn’t pork you want to be eating, remove it here.  At this point, taste for seasoning.  The smoked pork will have a lot of salt on it, so you don’t need nearly as much as you think, so it is very important to save salt for last.  Dish it up in a nice bowl, and call it a day.