Save State: An Impossible Maze (Antichamber)

6:20 PM on 04.22.2013 (server time)    0
[Save State is my personal homage to the wonderful Memory Card series that used to be a feature on Destructoid! Want to be part of it? I am thinking about creating a group account for a rotating panel of writers (or whatever) to try and make Save State a regular cblogs feature. If you would like to be a part of writing Save States, please send me a PM, as this is my first attempt to gauge interest.]

Gameplay reaction videos on YouTube always seem to bother me. Usually for scary games like Amnesia: The Dark Descent or Slender, people seem to really play up their fear. Then there are celebrities playing games and freaking out about whatever minor things are happening in the game that we are all used to by now. I never really get that kind of “I must yell at the monitor” reaction from games, but maybe actively recording yourself has an effect on that reflex. Most of my reactions are more akin to singing out the theme to Team America: World Police, like at the end of Homefront, or a choice set of words to a PvP opponent, mostly in Dark Souls.

That being said, there is one game in recent memory that blew my mind down to the base of my spine so well that I was regularly shouting at my screen the cliche “No way...nuh uhs”, but instead of being out of fear, it was something that I honestly have to call “Magical”. That game is Antichamber. Antichamber released at the end of January of this year after winning several awards related to being an indie game. Many indie games focus on trying to tell a touching story, or to try and recreate a new 8 bit experience, but Antichamber sets it sights on deconstructing a genre that Valve established. 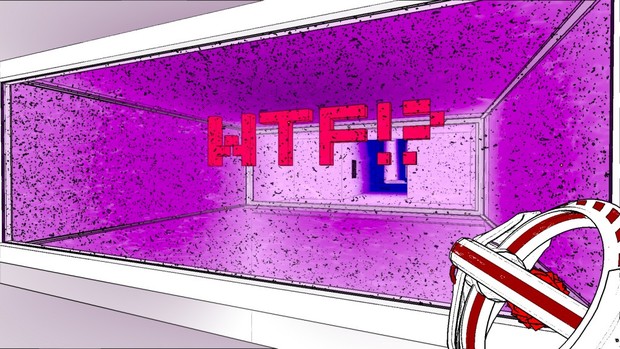 It is often talked about how videogames are a unique media because the player has control over their actions. Unlike in a book, you have the option to perform any actions, positive or negative, instead of being forced to watch them unfold as is dictated by the text on the pages. But this game touches on a completely different aspect of what makes videogames so amazing: They don’t have to play by any rules. They don’t have to use the same physics as the real world. Some of the most fun glitches to watch are glitches that abuse this! The fact is though, most games try to emulate reality as hard as they can in the name of immersion. Anitchamber completely disregards this! Why should I have physics? You know what? Why should I even use your geometry! You watch as you take six 90 degree turns around a pillar, and its just...disbelief. That can’t be right. That can’t be real!

The whole game left me feeling like I was in the movie The Labyrinth, as I mentioned above. Absolutely nothing is certain, paths can change, leading to me screaming out the same line of “Thats not fair!”. As much fun as I have had exploring Skyrim, as great as it is to ride through Hyrule, Antichamber has been one of my absolutely favorite worlds to get lost in. In a regular world you can lose immersion if something goes wrong - a giant rockets your companion into outer space, a dog is floating through the streets of New Vegas, or a car is stuck halfway through a wall...but here, you can’t ruin the immersion of being there, because our rules aren’t the game’s rules. To go back to what I was saying above, the best description I can use for this kind of experience is simply magical. It is like if Disney World collided with the Large Hadron Collider, and I was free to walk about the resulting park/science experiment.

I know this might be extraordinarily esoteric, but I absolutely love the book House of Leaves...can you imagine if someone used these principles to create a game based on that book? Dark corridors shifting, the world changing as you progress, a rumbling beast coming from impossible locations. A sense of both exploration and horror tied together in a world not bound by regular rules. I would play that game for at least half an hour before I turned on all the lights and Adventure Time! I could see it being incredibly easy to get lost in that world, because only thing that can stop you from being engrossed in it would be trying to figure out how they created it.

There has to be some kind of warp in a space where you teleport between possible combinations of what is real, right? I honestly don’t know the answer to how they did it, but that’s part of what makes it so special. I can try to come up with ways that I could think they could do it. I can try to come up with how Hollywood might produce a similar effect on a set using rotating walls and an actor, but those are effects. For all I know, in this game world, that could be the actual rules to how matter works, how geometry works, and how math works. Wrap your head around that: In this game, that could be what a corridor could really do. I can’t begin to rationalize that, and I realized the perfect analogy for it: trying to imagine how Antichamber works for me is like trying to imagine a new color. I know that some animals can see more colors that I can, but I don’t know....what colors! My mind has a limitation to what it can perceive based on what I know exists. I know if I turn a cube and look at four faces, I have seen the whole cube, but Antichamber doesn’t. It is the amazing experience to be able to walk in a world where this doesn’t exist. Where I can walk into a corridor attached to a room and come out in the same room that is opposite to itself. I honestly don’t know if the game engine cheats to give this effect or not, and as much as I want to know, I think it would make me sad to figure out how it actually works. To me, it is a chance to just get lost in an impossible maze, outside of anything in our own world.

Load State?
State 01: No One Stops - Nier
#General-Opinion/Editorial
Login to vote this up!