Dark Souls 2 footage was released recently, so this seems like a good place for a longer impression than �sploosh�. It looks like they replaced Estus with stones, and I hope the bonfire regenerates them. I really like that aspect of Dark Souls, despite not having played Demons Souls, because you couldn�t hoard regenerating items, but on the other hand you always have a guaranteed supply of them, so you never have to grind them out. One of the enemies shown looked like it had a kappa shield, which I am hoping is a thing for players - a shield that you can only wear on your back that prevents backstabs. Would liven up the PvP community a bit. The whole thought of Dark Souls 2 has me incredibly concerned overall. Dark Souls is one of my top 5 best playing games this generation, so it has a monumental pedigree to hold up to. All comparisons I make to this game won�t be against other games, it will be against the original, and depending on the tweaks they make it can be hard to not lose sight of a good game standing in the shadow of a great game. Also during this playthrough, I came up with one thing that I would really like to see in Dark Souls: A post game boss rush. The reward would either have to be non existent, or delightfully useless, like Gwyn's sword. 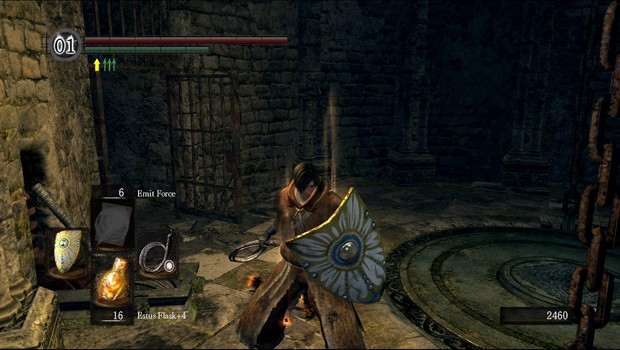 Sidenote: This shield is worse in almost every relevant way to the Bloodshield. This is aesthetic limitation number 7 of the playthrough

After that, I was ready to take on Nito. And when I say I was ready, I mean this was literally the most ready I have ever been to fight him. His biggest threat are regenerating skeletons which, like a reverse masochist, can�t get up after I whipped them. This just left him - a massive pile of unholy bones and decay with a sword big enough to make Cloud envious, and me - a fast rolling, immune to poson priest carrying the papal whip. He never stood a chance. I decided that the best way to celebrate this would be to +14 both of my shields, so yet again I was off to Blighttown (joy), and to farm Dark Wraiths (jubilation). The Dark Wraiths were much easier this time around, partially because I am getting the hang of parrying them instead of fishing the backstab. Each passing day I play, the whip keeps on getting better and better in my mind. I am used to it�s unique moveset, and the damage it can deliver when upgraded this way is actually not terrible. With half of the Lord Souls in hand, I am feeling pretty confident going into the next two. Part of me regrets cheesing out Rogers and Hammerstein, as all of today�s bosses were defeated without miracles being cast. But ultimately, I think I am alright with the way that it played out, because at the end of the day we should be playing games to have fun, and honestly playing this run, documenting the process, and splicing video has been one of the more entertaining things I have done lately, so I�m cool with it. Speaking of which, sizzle real for today!


Also, holy hell, I remember Castlevania's music being awesome, but not that awesome
Login to vote this up!