5:03 PM on 04.09.2013 (server time)    0
“Rules do not exist to bind you, they exist so you may know your freedoms”
-NieR. If you haven't played NieR, just don't even bother reading this blog. Not because I'll spoil it, I just don't want to be associated with you. But seriously though, read this blog. Page hits and faps sustain me.

Dark Souls is a truly fascinating game. Part of what makes it fun to play is how open ended it is. Sure, at the beginning of the game you have ten paths, and only one leads to you not dying a miserable death, making the first time playing the game a trial and error game played with your spleen. However, the freedom that the game allows is really refreshing after you have become an advanced player. Last week, I described the first half of my sequence breaking, cosplaying, journey to become more like Simon Belmont in Dark Souls, and none of that would be possible without totally circumventing the rules, even if you don't have green hair or money. In fact, I could skip the Taurus Demon, Capra Demon, and the Gaping Dragon completely if I wanted to this run, because I have the skills (and the equipment) to go around those bosses. In addition, you can go way out of your way to pick up equipment that allows you to be the best you can be right at the get go. For instance, you can start the game, run past ghosts, unlock New Londo, and pick up the Very Large Ember. Or, if you wanted to, before even stepping foot in the 'Burg, you could go to... 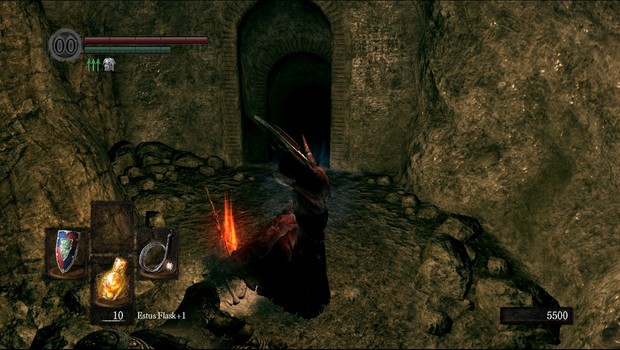 This bonfire gave me twice the erection that Dead or Alive: Extreme Beach Volleyball ever will

I made my way back to firelink. I said hello to Andre. With my whip now at full power, I could finally focus on finding all of the wall chicken a man can handle. I tested it out on the undead near the Parish, dealing 196 damage per hit, enough to get them in one shot. Do you remember the scene from Dogma where Loki is dropping bodies from the sky? This is the equivalent of that in Dark Souls. The soundtrack of the game suddenly changed from My Chemical Romance to Devo. When a problem came along? I got an Uncontrolled Urge. AN UNCONTROLLABLE URGE TO WHIP IT. I took the elevator back to firelink. I walked up those stairs. And I got my revenge on this game. Some things cannot be expressed in writing, so I present to you: