I am not going to be one of those guys who goes on and on about how Dark Souls is super simple. If I was in a reviewers shoes, my first playthrough would have torn the game apart - between traps that you can’t predict, enemy placement that is borderline torture, and only the most cryptic help messages, this game practically begs you to use an FAQ (unless you played Demons Souls, then this is all apparently standard stuff). Allow me to explain: After playing the game ‘normal’ until my eyes have bled out, (so...twice?) I decided to try do something that challenges me, and something that is a new experience. This gave me the idea for a Belmont run, named after Simon Belmont of Castlevania fame. What are the rules? You have to beat every boss after the tutorial wiiiiiiiiiiith a herring. Or a whip. Truth be told, a herring would be more effective in some cases. And it wouldn’t be a Belmont whip if it wasn’t holy, you have to kill the Taurus Demon with a holy whip. Rather, the king of Holy Whips, an Orange Whip with John Candy. Failing that though, a +9 Divine whip will work, only because +10 is actually impossible without NG+. This presented me with the greatest front loaded challenge of a souls game. Let me take you on a trip! Stop one: 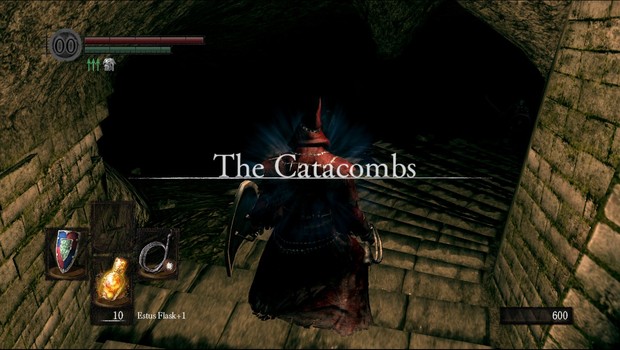 "I don't regret this. But I both rue and lament it"

Now, this could have been much, much worse. For those who don’t know, a divine whip permanently kills the skeleton, even with a necromancer around. Sorry Sally, Jack isn’t coming back. This required a lot of patience to only pull one at a time, but overall was pretty manageable, and it was pretty spot on with the theme I was going with, so I couldn’t complain too hard. This also allowed me to pick up the remainder of the gear for my Belmont Run, in the holy set. Unfortunately for me, Simon didn’t wear a hat, so neither could I. I am fairly certain he wore gloves though, so those are still on. And rings. The hardest part was going to be killing Pinwheel. Wait, what? Much like the Moonlight Butterfly, this run was becoming a cruel joke, where the bosses who were previously tripping on pools of their own saliva were my greatest fears. On my previous character, I killed pinwheel in 2 hits. This time, it was going to be about 20 hits, I estimated. With that I mind, I summoned Leeeeeeeeeeeeroyyyyyyyyy to help me out. I basically ran around the arena taking out the copies of Pinwheel while Leeeeeeeerooooyyyyyy took out the real one. I actually got it on my first time! Pinwheel really is the Radditz of the Dark Souls universe.

With that behind me, it was all good times and rainbows, right? Right? Having earned the Rite of Kindling, my time down here was done? Sadly, no. But that is going to be a blog for another day.
Login to vote this up!