Blindly Walking Into the Abyss: Day 2

Good news everyone! As of today, Dark Souls has passed Borderlands 2 as my most played game (probably of ever). To commemorate this, I want to begin with a cool little anecdote about why I love Dark Souls: As I mentioned here , I have put about 200 hours into Dark Souls on the 360, so most of the playthroughs were going through the motions. While going through Sens Fortress, I began to wait for Sen�s balls to drop, so I could grab his serpent. You all know what I mean. As his walls caved in, I noticed that he has crabs. Now, here�s the thing about this game: Crabs aren�t enemies in Sen�s Fortress, or for that matter, anywhere. But apparently, I was being invaded by a crab monster, and would have to perform the ancient right of crab battle, with little knowledge of CQC. It was so strange though, because after spending about 100 hours in the game, I encountered a new enemy, and just about defecated with fear. It was nothing I had ever seen before. But just as it suddenly came into the world, it suddenly left, after a sword, and about twenty seconds of nervous approach. So far my encounter rate for these Vagrants is about once every 100 hours. Braid�s got nothing on waiting that long.

I also wanted to muse on the PvP aspect of Dark Souls, as I was invaded today, and want to have a preamble that doesn�t involve spoilers, so I figured I would include it here. I realized today that invasions in Dark Souls can be described by the Prisoner's Dilemma. If a PvP player gets invaded by a PvP player, both players will be happy as a clam. If a PvE player gets invaded by a PvP player (or vice versa), the PvE player is going to be put off, while the invader will be happy with his easily retrieved souls and humanity. Finally, if both players are set to PvE, you get a boring peacocking match, where both players circle each other until one swings and all hell breaks loose, which is kind of fun in its own right. The only problem is that PvE players only get invaded by PvP, so more often than not, I just feel like standing with my back to the invader, because I am not going to win with this build. 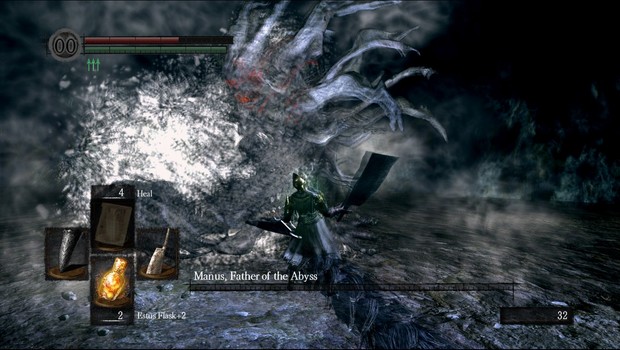 Like I said before, no shrug, no kill. This one counts.

I still think I have some DLC to go. I feel like I am missing a section somewhere that will let me fight that big ol dragon properly, perhaps with the assistance of Gough, maybe as a summon? Maybe he was a summon back there. Need to check. In any event, this concludes day two. I wanted to ask, as a matter of curiosity, if my computer and ISP cooperate, would anyone have interest in watching a livestream of Dark Souls, and maybe some other games? I think I have the tools for it, but have never tried to set it up, but it seems like fun. I�m thinking of doing a pilot this weekend, but wanted to see if anyone would watch. Feel free to leave any feedback in the comments, and thanks as always for reading!
Login to vote this up!