Behind the Voice: Karen Strassman Part 2

11:10 AM on 03.02.2013 (server time)    0
Welcome to part two, the dark middle chapter of this exciting list of vaguely related video games. Last time I said nice things about two separate Konami games and even a David Cage game, so this truly is a brave new world. Let's jump back in and see what revelations part two has in store, shall we? 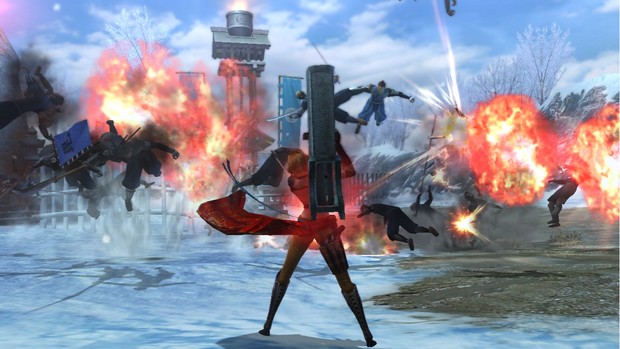 A lot of you might not know what Sengoku Basara is. So let me explain what it is for those of you in the dark. You know how Dynasty warriors 3 is sort of famous for its terrible English dub?

Sengoku Basara is kind of like a parody of that. I remember when this game came out. I didn't really know anything about voice actors, but my friends had got the game, and were playing it while we would talk over skype. So I was hearing the game over their mics, and the dialogue was the most inscrutably weird thing I'd ever heard in a video game. And I remember one of my friends was playing as Magoichi at the time, and while we were conversing, the game would occasionally interrupt with the barking proclamation "Sharpen your claws! Crows of Saika!"

And as I kept hearing more and more of Magoichi's story mode playing off of my friend's television, I became more and more curious as to just what in the world this game was, mostly due to her insane dialogue, so curious that the next day I went out and rented the game after having made sure of which character to start with. The next day I took it back and bought the game on the spot. I started with Magoichi and fell in love with the game almost instantly.

The game play was fantastic, the story was beyond peer and Strassman was hilarious and awesome throughout. Magoichi Saika is quite possibly my favorite character Karen Strassman has ever voiced. She's definitely up there anyway. She is also quite possibly the most badass female character in anything ever.

It's truly rare to get a female character who is genuinely on equal terms with her male counterparts. Girls in action stories can be tough, but they usually have to be slight, and reliant on speed or maneuverability over raw strength, and are thusly type-cast into a handful of roles, most of which are subordinate to the male hero roles. Which I think is stupid.

I mean. They're all cartoon characters anyway. Why can't the girls be as cartoonishly powerful as the guys. It's not like most men in real life can even maintain an athletic physique, let alone shatter a small wooden structure in a hail of splinters and dead bodies with nothing more than a single head-butt. Why should the girls get a raw deal in a world made entirely of unchecked, gross excess?

Magoichi is one of the few characters I can think of who breaks with this trend entirely rather than just subverting or dealing with it. She is truly on equal footing with any other character in the game without question. Also, she's equally campy as she is badass.

Karen Strassman created a character who simultaneously sounds hilariously campy and ridiculously awesome with Magoichi. I mean, the Japanese dub came first of course, but English localizations have been getting more and more adventurous over the years, and Strassman's Magoichi certainly stands apart from the original. You almost wouldn't recognize her from her other, more subdued roles by the barking and brooding delivery she gives here, which stands in stark contrast to the uniformly soft-spoken Japanese performance, which is done by Sayaka Ohara in case you wanted to know.

But like I said, you almost wouldn't recognize her from her other roles. She really takes on this larger-than-life persona with Magoichi, which I don't feel like she's ever really done before. At least not in any games anyway. Even her role as Kitana in MK9, while similar in some ways, doesn't have the boisterousness to it that her performance as Magoichi has. Kitana seems utterly milquetoast by comparison.

Magoichi sort of comes across almost like Brian Blessed or Tommy Lee Jones in the game in that she just steals the show any time she walks into frame, with her barking proclamations and her deliciously confident laugh. I had mentioned before that Strassman excels at over acting, and this game stands as the greatest testament to that fact. She's a character who is fully aware of just how awesome and tough she really is and is not afraid of being boastful.

Sengoku Basara is an ensemble cast of almost cartoonishly larger-than-life personalities, but Magoichi stands right up at the fore of all of them as both the most cartoonish and the most awesome of them all.

"Sharpen your Claws! Crows of Saika!"

"Foolish ninja. You're no match for my artillery."

"Let the red bell toll for the proud Saika faction!"

"What is it that you fear the most? Your own death? Or the shame of defeat? Either way, know that there is nothing we fear. Nothing at all! We are the Saika faction! Prepare to face us if you dare!"

"It's not polite to stare. After all, we're people too."


Anyway, that's all for this installment. Tune in next time when we will finish this thing out by talking about ghouls and bats and weddings. It's sure to be spooky and bloody and maybe even a little romantic. Anyway, see you then.