Ah the holidays, a time filled with cheerful songs and schmaltzy television specials, how I hate them. I know I must sound like a bit of a Scrooge saying that, but I truly mean it. I think the problem is the fact that they get shoved down your throat way too early. It’s barely even Thanksgiving when decorations and that god-awful music start to assault my senses. It’s enough to make me want to attach high-powered weaponry to my car and start mowing down pedestrians. Well not really, I’m too pretty to go to prison, they’d use my ass for currency in the joint. However, thanks to games like 1994’s Quarantine, I can play out my bloodlust without fear of prison rape. 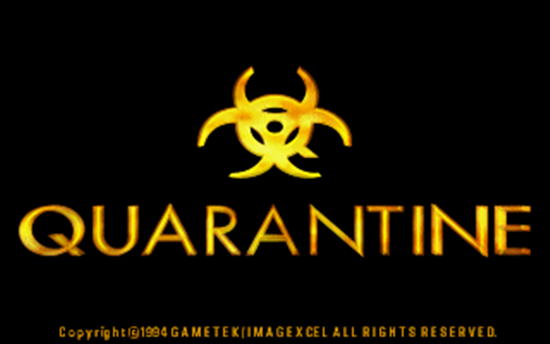 In Quarantine you play as Drake Edgewater, a hovercab driver in KEMO city. Thanks to a chemical introduced into the water supply most of the population as been turned into mindless killing machines. As one of the few unaffected citizens Drake delivers fares to earn money for upgrades to his cab so he can get out of KEMO city, and away from the psychopaths.

Let’s face it though; the plot is simply window dressing for the real point of the game: blowing up cars and people with cool weapons. Through my time with the game, both in my youth and recently, I haven’t really seen anything resembling plot. All my time is spent driving passengers around, buying big guns, and blowing stuff up.

This was a game it turned to when I just wanted to see some brutal violence. As I stated above, I’ve never had much luck getting the story to progress, so I’d play until I got tried of mowing down pedestrians. Now that I’m older it might be a bit easier to follow the story but now I find the game extremely disorienting. I doubt this is an effect of my increased age so much a failure to adjust to the game’s now archaic design. The generic textures and lack of a minimap make navigating the streets difficult, at least I hope those are the culprits, 22’s a little young for Alzheimer’s to set in.

Despite its flaws this was the game that started my love of the car combat genre. Twisted Metal, Rogue Trip, Interstate '76 (which I might write about later), I love them all. If I can drive around in a fast car with guns strapped to it chances are I will love the game.

This game doesn’t really stand the test of time, but is still worth a look, if for nothing else than the strange cyberpunk setting. If you are interested you can download it here. Hell, why not grab the sequel while you’re at it. Order now and I’ll throw in DOSBox for no additional charge, all this for the low, low price of $29.95. Ok, I really need to stop writing these things at 2 AM.


Well that’s it for another look at one of the games I obsessed over as a kid. Next week I’ll…do something. Look, I have really hard time coming up with the opening and closing paragraphs. So I’ll just cut my losses and stop now before I write something stupid, well stupider than normal. Wait, I meant more stupid, not stupider. Goddamnit, I should have quit while I was ahead.