9:54 AM on 10.04.2007 (server time)    0
I was digging though some old CD-ROMs the other day when I started thinking about all the games I used to play on my families old Packard Bell during the early nineties. A glorious time before DirectX, when cheesy FMV intros ruled, and mouse look was all but unheard of. I decided to write C:\DOS\RUN to cast light on the computer games of my youth, to be both as a source of nostalgia for those like me, and as a history lesson for the young’uns.

First up an interesting little racing/car combat game from 1994: MegaRace 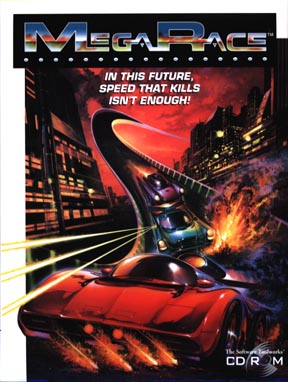 The game takes place in the distant future. You play a contestant on Virtual World Broadcast Television (VWBT) hit game show MegaRace. In MegaRace Ordinary citizens get to participate in virtual death races against real bloodthirsty speed gang members, all the while receiving words of encouragement for MegaRace’s host and resident Don Knotts look-alike Lance Boyle.

Why take my word on what this game is about, let’s give Lance an opportunity to tell us himself: (skip ahead about one minute if early nineties CG isn’t your thing)

The game play is pretty straight forward, race around the track blowing up gang members for cash and fabulous prizes. As you progress through the game you get access to gang leader’s cars each one slightly stronger and faster than the last. I used played this game all the time. I even used to bring the CD with me when I would visit my grandmother so I could play it on her computer too.

Really though who could blame me for my addiction, when the game offers pulse pounding action like this:

It was an ok game for the time, but like a lot of computer games from the era it hasn’t aged well at all. The game play is simple, the cutscenes are cheesy, and outside of the basic plot there’s no real story to speak of, no plot twists, or ever a real ending. You just keep going until you acquire all the cars, get bored, and quit.

But come on, who could get bored scenes like this await you after every race.