It’s everyone’s favorite holiday, Halloween. That time of year when we celebrate that fateful night when the Great Pumpkin rose from the pumpkin patch, and teamed up with Dracula and the Wolfman to battle Cthulhu, who was attempting to turn all the world’s candy into candy corn. Every October 30th we honor their noble sacrifice by eating lots of sugar and watching bad horror movies.

Instead of my usual full serving of retro gaming goodness I figured the in would be more fitting to do a few bite sized Halloween themed nostalgia nuggets. First up a game that fits the Halloween theme by not only being about zombies, but also having the word Halloween in the title, 1993’s Halloween Harry

You are agent Halloween Harry and you must stop aliens from turning the population of earth into zombies. Of course the best way to do this is to mercilessly kill anything that gets in your way. This is a pretty straight forward platformer, you fly around with your jetpack destroying zombies and rescuing hostages. It can be fun for a while but the controls are a bit unresponsive.


Next is a text based adventure game and the first game in the Hugo trilogy, from 1990 its Hugo’s House of Horrors. 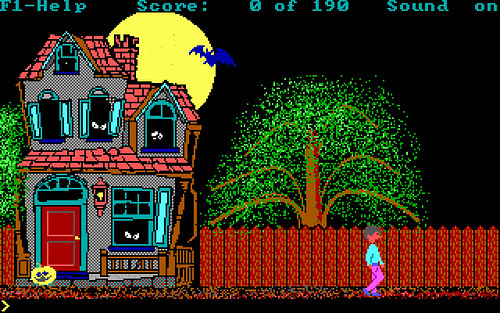 In this game you are Hugo and you must explore rescue your girlfriend Penelope who went and got herself kidnapped after agreeing to baby-sit in a creepy old mansion. To do so Hugo must explore the mansion solving puzzles and avoiding the many deathtraps hidden therein. Although this game is still pretty beloved I must say I’m not a fan, but I really dislike parser based adventure games as a whole. People who enjoy those games should still be able to enjoy this games tongue-in-cheek humor.


Hugo not only stared in a series of adventure games, he also stared in a FPS 1994’s Nitemare 3-D.

In this game Penelope has once again gotten herself captured, but this time Hugo’s tired of taking the pacifist route, this time its personal. He goes in armed and ready to kick some mad scientist ass. This is a really standard Wolfenstein 3D clone, and this would have been fine except that it had the misfortune of coming out after Doom. The world was done with Wolfenstein 3D rip-offs; the people now wanted Doom rip-offs, Nitemare 3D bombed.

Worse than Doom? You be the judge. (Here’s a clue: The answer is yes.)


Want to give these games a shot? Halloween Harry is abandonware and can be downloaded here. Hugo’s House of Horrors and Nitemare 3D are different stories, both are owned by the creator David Gray, and he wants $10 for the Hugo Trilogy and $12 for Nitemare 3D. Unless you want to pony up the cash you’ll have to settle for the shareware versions, which you can find here and here. As usual DOSBox is the best way to experience these games on any modern machine.

Well I hope these games help you get in the Halloween spirit. I hope you have a Happy All Hollows Eve whether you celebrate by getting drunk, watching scary movies, sacrificing babies to the Dark Lord so he’ll give you the power necessary to defeat your enemies, or whatever you particular tradition is, I’m not here to judge.