Today in C:\DOS\RUN we take a look at an addicting little puzzler from 1994, 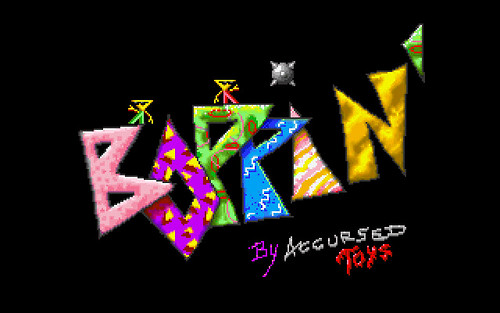 The object of the game is to make to make two or more similar blocks touch each other, making them disappear from the board. You do so by grabbing a block from the spawn point on the map and throwing it across the board at a 45 degree angle, ricocheting it off of walls and other obstacles. If your block leaves the map or touches a block different from it self it is destroyed, and you lose a life.

One of the many unique puzzle boards in Boppin’

This game caused some controversy when released, for the level of gore it contained. “Now shipero,” you ask “how can there be gore in such a cute little puzzle game?” Well that’s easy the gore doesn’t show up until you lose each of your lives. Each time you screw up and lose a life your character begins to weep, lose them all and he decides that life is simply to painful to go on living anymore. He then puts a gun in his mouth, and sprays his adorable little brains all over the level. Later versions had this feature removed, by the games publisher Apogee, to appease angry parents.

See the game in action: (This is from a censored version, so no suicide here)


Boppin’ also had an interesting plot; it takes place in the land of Arcapaedia, a world created in the dreams and imaginations of videogame players. Someone running around in a bunny suit, and calling themselves Hunnybunz has captured all of the monsters from the games and imprisoned them in special blocks, in an effort to clean up Arcapaedia and stop the violence. However with no monsters to fight the games are now boring and worse yet there is now no way to score points, ensuring that high-score boards everywhere will forever contain the initials of the developers.

Our two heroes, Yeet and Boik are tasked with the duty to free the monsters from their blocky prisons and save the video gamers of the world from crippling boredom. They must do so by arranging the blocks into certain shapes, once one of the shapes is made one of the monsters is released from its prison, free to pillage, rape and murder to it’s heart content. Cheering you on are your generic game character friends, who are relying on you to give them something to kill again.

This game is a lot of fun, and unlike the last game I covered it has aged relatively well. I mean it’s not going to pry you away from Halo or Team Fortress 2, but it is a fun time waster. “But shipero,” you say, “Your brilliantly written synopsis of this games makes me long to play it for myself.” Well you my friend are in luck, the original developer has given permission for all versions to be freely distributed, but wait there’s more not only are the DOS and Amiga versions free, but they also made a version that runs on Windows XP, with no emulation required on your part. Just grab it here and enjoy the insanity.
#Community
Login to vote this up!