12:25 PM on 04.30.2012 (server time)    0
Seven days ago, I stepped up to a challenge. The premise was simple, could I create a simple dungeon raiding card game in a scant 7 days? The idea behind the game was based around the room clearing concept of Gauntlet but, as time went by, started to incorporate elements of classic Zelda and even Prince of Persia 2. You may have seen 4 of the 7 days detailed last week here on the CBlogs and while I wrote tiny blogs for days 5-7, I will only post them here if, and only if, people are interested in them.

Keep in mind, this entire concept has two major handicaps against it. The first being that it has no official title and the other being it has not been playtested at all. The purpose of the rush wasn't for playtesting, simply getting something together. The game, in question, runs $23 currently to make a print from The Game Crafter so once I have it in my hands and ready to test, I'll be playing the hell out of it and hopefully it will be ready for sale sometime in mid June. So with that said, let's take a look at the game currently referred to as Mini Dungeon Raiders: Lich Slapped.

Before looking at anything else, let's look at the Scenario Cards. The game, in it's current form, sports 6 different Scenarios. At the beginning of the game, you randomly draw one of these scenarios and set the dungeon deck up accordingly. As you may notice, some require a set amount of standard dungeon tiles and there are 29 of these standard tiles which means, of course, you're not going to play every tile in every game. It also calls for special tiles and these are found on the lower right corner of the dungeon tile. So once you have these set up, you shuffle the tiles according to the scenario and place them somewhere within the reach of all the players. 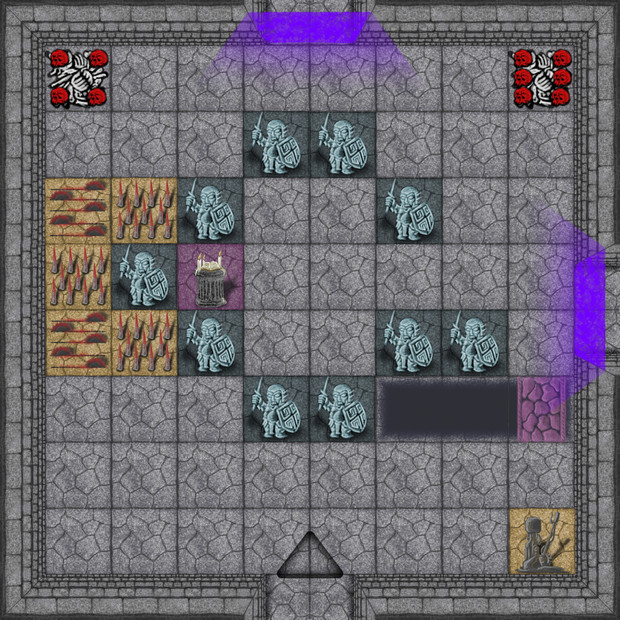 If the Lich ever occupies the same space as a player, they instantly die, ending the game. That, in a nutshell, is the game I made and ordered from The Game Crafter last night. I'm sure it's busted and broken as all hell, which is why I refuse to sell it until it's ready. Naturally, as the game is refined, portions of the artwork may change, new tiles added or removed, and more scenarios are possible. After all, there are only 44 Dungeon Cards in this set and more scenarios will add more chances to add thrills.
#ShareonCommunityBlogs
Login to vote this up!