After I finally purchased my own Playstation Plus account, (I had been leeching free games from my exboyfriend while i was playing under his console) I must say I have been rather disappointed with the game selection choices. While I was still playing under his console I got some of the best game titles I've ever played for free through Playstation Plus including these which i loved so dearly.

I must admit a lot of these games I would have never purchased on my own. For example Tomb Raider, I have played the series since the original playstation titles came out.. however I've lost interest over the years as the game play started slacking (in my opinion). This last Tomb Raider blew my mind away! Even though (spoiler alert) I was getting frustrated with how many attempts of her rescue kept failing miserably, I must say that it was absolutely a great game and not like traditional Tomb Raiders have been.

Same thing with DMC. Last christmas, I actually got the collectors edition of the Devil May Cry series. I remembered being so into them when they first came out. I literally put that disc in my playstation maybe 2 or 3 times, and decided that I grew out of that series and didn't have the patience to play it for nostalgic factor anymore. The newest version DMC also completely changed my mind! Doesn't hurt that the soundtrack was also done by two of my favorite artists Combichrist and Noisia. It brings me so much pleasure to see that artists i've been listening to for years keep popping up in video games now. (Noisia has also been on SSX, and Wipeout). Asides from the soundtract, DMC had amazing combos - it's one of those games you can't just pick up and play because you will forget what combos you need to press to get ahead. The artwork, and the story line were also mind blowing! I can't tell you how much I lusted the horror carnival opening scene. Infact that's what suckered me into the rest of the gameplay, when I was unsure of how it would unfold. 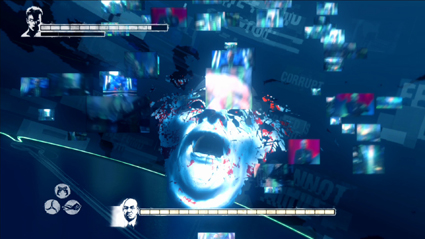 Because of Playstation Plus, I have become a HUGE advocate for Sony and Playstation systems. I have turned majority of my friends in the debate of  Xbox vs. Playstation console purchases to favor Playstation for this feature alone!

However the last few months, when I finally bought my own subscription on my console, Playstation Plus had been letting me down. I do realize I am somewhat picky when it comes to games. Although everyone raved about the Binding of Issac.. I gave it a few tries and was like... "Really?! This is what people are raving about??" For the record, I do still have my Playstation 3. The best game up until this month that I've downloaded from PS+ was the Playstation All Stars, and even that one wasn't as great as people had hyped it to be. It was more like a horrible attempt at a Smash using Playstation Characters that I wasn't even too passionate about to begin with. I guess, you can't complain toooo much when you get so many good titles for such a long time. I was just upset because none of those were even saved on my console. Here I am with a new ps4 console and dusting off my ps3 from years of neglect, with hardly any games to play after almost 3 months of a subscription to playstation plus.. which just caused me to grind the same levels of Destiny repeatedly into some kind of psychosis love/hate relationship with the game.

FINALLY! This month has changed for the better!

Let me just be the first to say that I was skeptical about the Plants vs. Zombies game being that I had it on my android tablet. I was addicted to it for months, and would play it until I fell asleep in bed. But for a console?!

Once again, I have been impressed! To my suprise it's actually a online multiplayer shooter game that is pretty damn awesome!! I'm so glad that I was able to catch this game, and also Injustice for my PS4 this month! I finally have something to keep me from MINDNUMBING YET ADDICTIVE DESTINY GRINDING!!!  Injustice also caught me by suprise as I didn't realize that it was a fighting game until I started playing it. Since I started playing it (yesterday) I have finished the story mode as at least 6 or 7 of the characters! I'm not big on fighting games usually (except soul caliber) but this one has a great story line, great characters, great fighting style, and I personally love that you can use and interact with your surrounding to smash your opponents with!

So once again.. I am grateful for Playstation Plus! You have allowed me to play games that I would have never given a chance had it not been free!