Somewhere Beyond the Sea: A Bioshock Retrospective 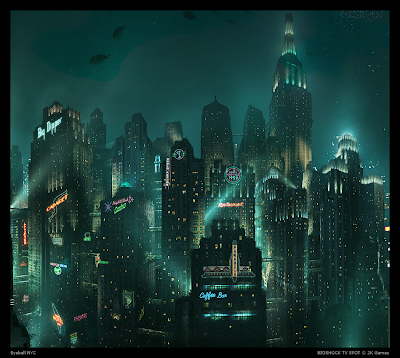 The world of Bioshock, an idealist, a deceptive business man and a puppet turned wildcard. All three sunk beneath the waves, lost in a decaying utopia known as Rapture. Much like Jack, I had spent a few years away and felt obligated by the upcoming release of Bioshock Infinite to return. I know beyond a doubt, Bioshock is an absolute champion of atmosphere. It contains the greatest and most complex grouping of concept, characters, universe, and story that has ever existed in the world of video games. 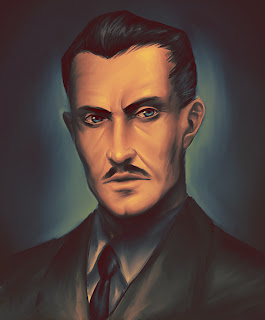 Andrew Ryan wasn�t a king, a dictator or president. He was a man, who fervently believed every man is entitled to full expression and zero limits. It was for this reason alone, he built Rapture. �A city where the artist would not fear the censor; where the scientist would not be bound by petty morality; where the great would not be constrained by the small!� A place where free thinkers were able to pursue taboo subjects or experiment with the limits of humanity was the only kind of place boundaries are really tested. When given absolute freedom, those bound by self-reliance will find anything given from someone else a favor. Understanding the importance of such favors, the first thing the people did was attempt to control one another. Unaware of the dependence they�re forging. 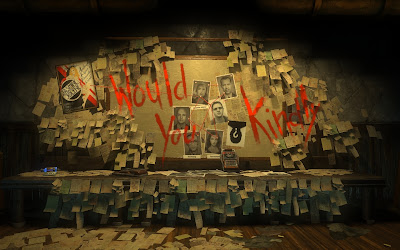 Perhaps the absolute antithesis to Andrew Ryan�s core belief comes in the form of a phrase, �Would you kindly?� It�s a simple phrase; it isn�t read from an ancient tome or spoke in some forgotten language. It�s a gamble, each time a stranger asks another for a favor, he�s rolling the dice. Hoping you might be so inclined to help him. Andrew Ryan did not believe in favors or manipulation of his fellow man, however, Frank Fontaine did. 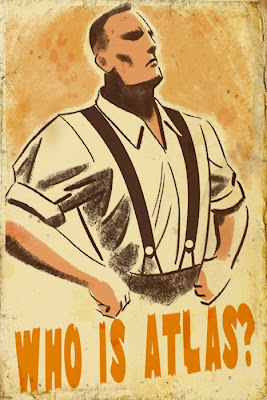 Fontaine was a business man; he didn�t come to Rapture interested in the flowering of expression but rather, the ditch of exploitation. A city full of weak-armed artists and scientists spaced out from their limitless thoughts were still like those �capitalist pigs� of America; consumers. When the denizens of Rapture scoffed at Ryan Industries� power, Fontaine, like any good businessman, saw a vacuum and filled it by creating Atlas, the sigil, the rallying cry of the �oppressed�. Atlas was whatever the market needed him to be and Fontaine knew better than any other inhabitant, the power conformity carried in any sales pitch. Both Ryan and Fontaine were creators. Ryan had a concept and Fontaine had a con.

That we play as a sick creation of both men should come as no surprise. Sensing the inevitable civil war, Fontaine saw you, Jack as a possible back up plan. Upon learning of Ryan�s illegitimate fathering of Jack, he enlisted the help of Doctors Without Boundaries: Suchong and Tenebaum with the ultimate plan of creating a sleeper agent. The irony here being that Ryan�s death was brought on by an environment he chose to create. Only in Rapture would it not be morally objectionable to genetically alter and brainwash a child. We may have had Ryan�s genes but we served at the hands of our master Fontaine. With the words, �Would you kindly?� we were rendered a slave. Jack was sent to surface in 1958 and returned only two years later to find bathyspheres previous locked, now open with only Andrew Ryan�s will to stop him.

When Jack arrived he found a once expressive city mired in silence, its halls vacant, its shops closed and its remaining citizens irreparably changed. Caught in a tug of war between two symbols of men, one offered explanation; Atlas and the other promised death; Ryan. Naturally Jack sided with Atlas. Ryan and Fontaine were not enemies and I believe that Ryan did not see Fontaine as ideologically wrong. Fontaine�s actions were merely a product of Rapture�s environment. 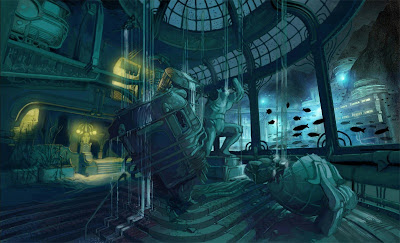 Rapture had failed, Andrew Ryan knew this well. However, it was his opinion that failing through freedom was barely a failure at all. If the by-product of individuality was nothing more than a pool of blood then so be it. At least no one had told them or enforced Rapture become this way. It was a pure evolution of what Ryan�s utopia allowed.

A little over halfway through Bioshock, we come face to face with the man, the myth and the legend, Andrew Ryan. He tells his son, �A man acts, a slave obeys.� This man may have had answers but more importantly he had questions, something unfamiliar to Jack, who mainly did as he was told. Powerless to stop himself, Jack killed Andrew Ryan. Each time Jack raised his cudgel; Ryan came back and said it once more. Unlike Jack, Andrew Ryan chose, unwilling to become a slave to what any other�s will. With this, Rapture was dead. Ryan was its life force and despite the cities� fall to decay, his presence allowed the idea to remain alive. It�s somewhat disheartening to know the moment Jack finally had questions, the man who had them now lay dead by his hand.

Imagine the disappointment Andrew Ryan must have endured escaping Russia, arriving in America, a place he believed a man would be granted real freedom, then discovering how democracy only appeared free. Its citizens brainwashed into believing what their nation offered was the same as liberty. As if a man falling from a high perch, feeling the wind against his face was akin to another merely sticking his head out a window. Despite this he urged onward, believing if you want something done right, you must do it yourself and he did. Thus Rapture was born. His exposure to the colossal failure of the civilized government birthed in him the idea of a city beyond the sea. Far from the clutches of those who believe they have the right to constrict the lawful pursuits of man. He had succeeded and for twenty years, he lived without restriction. The tail end of such a time produced the largest disappointment of Andrew Ryan�s life, you. After all, what could be more discouraging to a man like Ryan than realizing your killer was just another mindless drone. �I came to this place to build the impossible; you came to rob what you could never build. A Hun, gaping at the gates of Rome.�

Rapture was designed as a paradise for those seeking to escape the parasites. Every video game is created as a safe haven from the harshness of reality, a break from the monotonous routines of our everyday life. The problem that often occurs with any escape from reality is logic, the walls start to crack. Water begins to spring from each gaping hole, eventually forming a crushing wave of sense that tends to break any experience down. It�s hard not to notice by the eighth time we�re sent to activate some switch, we�re already drowning. How many games shove poorly structured characters or plot front and center solely to serve as a more inspiring facilitation of a list of objectives? Is it a coincidence that Atlas himself is a construct, something designed to convince us were playing a hero�s tale. The same tale he had the citizens of Rapture believing. Ryan was the promise of all games and Fontaine was the designer of one. It took being fed a fake narrative to expose us to how blind we�ve been. Eyes long shut, now opened to the world around us. Helping Atlas was a metaphor for the stale and undeserving stories were told in video games, while Andrew Ryan and his belief, his way of life was the true heart and soul of Rapture and therefore Bioshock. Ryan, who believed the world shouldn�t be made for everyone�s use but for those who know what to do with it. �On the surface, I once bought a forest. The parasites claimed it belonged to God, and demanded I establish a public park there. Why? So the rabble could stand slack-jawed under the canopy and pretend that it was paradise earned. When Congress moved to nationalize my forest, I burnt it to the ground. God did not plant the seeds of this Arcadia; I did.� 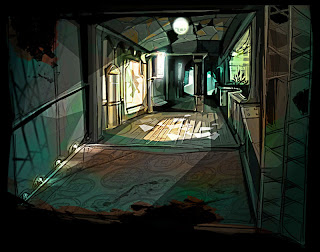 All of this culminating in something beyond a game, Bioshock is a work of art and like any piece of art, further meditation will expose the most subtle of details. The kind of details that have us suspending our disbelief for just a little bit longer. The developers of Bioshock, much like many of the free thinkers who came to Rapture, found an outlet for their expression.

Rapture was a drowning city, too stubborn to resuscitate, she sunk deep and took the illusion of freedom with her. Ryan just like the captain of any worthy vessel chose to go down with her. That�s the cost of liberty, true liberty that is, it requires an unwillingness to relinquish, an utterly insane commitment to a cause, something that you believe so whole heartedly that even the threat of death wouldn�t shake you.

My experience with Rapture has got me thinking, I�d like to get away for a while, a place among the clouds sure sounds nice. 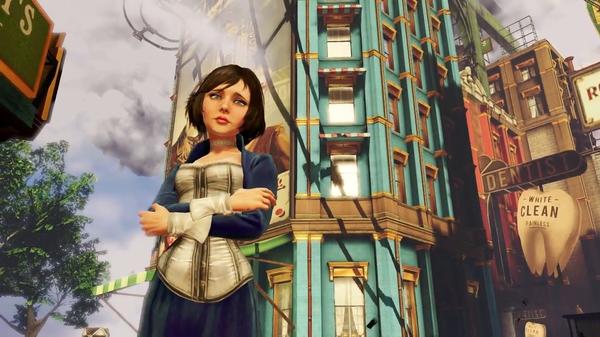 Hello there, come one, come all. My story isn't an interesting one, though it has its funny moments and occasionally it has some sad ones. To be completely truthful, I would have to admit my story isn't much of a story at all. I'm a grown twenty-one year old man who lives with his parents and plays practically every game of worth. I am equipped with such an ample of spare time due to my lack of how you say.....a job. Rather than completely waste my time, I decided long ago to couple my writing ability and my experiences with video games and thus here we are. My name is Samuel Houston. Call me SahFriendly. 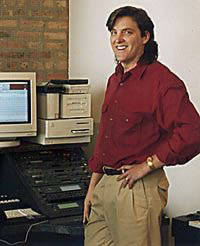