Into the darkness we are drawn.

It's October. The days are getting shorter, the nights darker and Halloween is approaching. The time of year when we begin to openly celebrate the macabre, the gruesome, the twisted, and the deranged. A lot of us will watch horror films, some of us will decorate our houses with assorted ghoulish paraphernalia, and I can imagine a fair few of us will be playing horror video games. The Evil Within will be out in time, as will Alien Isolation. In fact after a few years of neglect it seems like the horror genre is experiencing a bit of a renaissance recently. Because of this, and of course due to the time of year, today I am going to be asking what makes video game horror so appealing.

The strange thing is that on surface level, horror in video games should not work at all. If there is one thing that we've become accustomed to in gaming it's death. Marios been burnt, Pacmans been eaten by ghosts, Sonics drowned and Snake has been shot. It's an eventuality in gaming. How many games have you completed? I'd say there's a good chance that the number of times you've “died” in a video game is a significant multiple of that number. There will always be another life, or an extra continue, and so the worst thing you feel when your character dies is frustration. At most anger.

I'm not a complete monster. I was a little bit sad when Aerith died in Final Fantasy 7. There were times in the Walking Dead when I felt a little concerned. For the most part though I am completely unphased by death in gaming. I guess I've just become desensitised to it and now have a nihilistic attitude towards it. The strange thing is then, that horror in video games scares me so much more than any movie, any book or any other media form. How has a format which has numbed possibly the scariest thing that can happen to a human, have such a strong impact on me.

There are of course certain ways in which games have an advantage. Interactivity is often the key thing. When we are in charge of something it's so much easier to get engrossed in what's happening. Think of a good horror game. If you were to describe it to someone there's a strong chance that you would describe where you are, what tasks you complete, what you're trying to evade. The world building in successful horror games is strong. I haven't played Resident Evil 2 in over 5 years I'd imagine. I think I could still accurately describe Raccoon City police department after all this time. 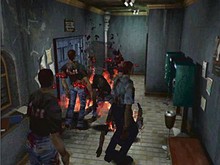 When I play a horror game, or watch a horror movie for that fact, the first thing that usually gets to me is a jump scare. Something jumping at you, or even just a really loud noise, can put you in a nervous, slightly agitated state, and it's at this point that you really start to notice the other creepy details, the build up in music, the shadows and ever present threat of something else that's going to scare you. When I played Outlast recently the first thing to get to me was a body dropping from the ceiling. After that I was more aware of the patients, the creepy messages, and things had become set up for me to be terrified again and again.

Another key word thrown around within the horror genre is survival. It describes the crux of the gameplay and also indicates the struggle you're going to be put through. You've been placed in an environment. There are all sorts of strange entities around you. There may be disasters, betrayals, secrets and lies ahead. And your task. Survival. Whilst it may involve moving from A to B like any shooter or platform game, the stakes seem higher when you're fighting for your life.

A classic motif of the survival horror genre is the limited amount of weaponry and health items you receive. As a result every enemy poses more of a threat and we try and utilise every bullet effectively. In comparison with a first person shooter, you know that every bullet you miss a shot with could be the one that you needed to get past the next creature you meet. I spent large parts of the Last of us, cowering behind cover with a tiny portion of my health bar, throwing bricks at clickers to distract them rather than waste a bullet. Feeling underpowered against an army of the undead certainly gets your heart going.

The location where a horror game is based is important. But more so than this is the way in which the location is perverted, and altered from something familiar to something with a dark twisted aesthetic. Something which looks alien and tells us in imagery that something is wrong. The most obvious example is silent hill where the town becomes metallic and alien to what we have become established to. In other games vines and plants will grow, or we may see the effects of run down all over. Think of locations from horror games. A lot of them are based upon recognizable places which we will have seen in our lives. Schools, hospitals, police stations and even regular houses and offices. It's the perversion of our own memories which can be the most effective way to create a terrifying setting.

I've often found that the creation of suspense in horror films is brilliant. But what happens when the creature or the killer is revealed. The illusion can be shattered through bad special effects, or through a loss of intensity when the monster is revealed. While a lot of horror games have lesser creatures throughout the game, the moment when a huge creature is revealed often signifies a huge challenge. Boss battles may require multiple attempts, and worst of all, can sometimes happen out of nowhere. When was the last time you saved? Have you got enough ammo? Health Packs? Getting attacked by a zombie can be scary. But when a huge creature that can eat you in one bite, or saw your head off shows up it can be graphic. It can be unnerving. It can add a level of intensity that the usual enemies cannot achieve. And what if it makes an introduction by horrifically raping mannequins?

At this time of year, horror is a passion of mine. And the scarier the better. Gaming is where I get my biggest fix of the scares and is an incredible way to present the genre. Whether its playing through an old series in a marathon, or trying out some of the new releases I know I can rely on horror games to give me my yearly scares. Do you have certain games or movies which scare you? Let me know in the comments. Thanks so much for taking the time to read this, I'm Rowdy Rhod and I'll be back next week with some more riotous, ravenous ranting.