Am I Getting too old for this jazz?

Hi there. My Name's Rhod, I'm from Wales and welcome to my incredibly awkward first blog post where I will indeed tell you that I've been lurking on destructoid for years but have not really written anything ever. I do (surprise, surprise) love video games and spend an inordinate amount of my time playing them and reading about them. I shall proclaim that Destructoid is the best gaming site online, and that I love reading articles by the writers and bloggers of the site. But what I'm also hoping to explain is what gaming means to me at this current point, and why I've chosen to stop lurking.

As an 8 year old child when I lost a life in Super Mario Brothers on the Nes I would be Livid. I mean chucking the controller at the floor, stomp my boots on the floor Livid. Capital L Livid. The trouble is as a 30 year old man child when I lose a life in New Super Mario Brothers on the Wii U, I feel exactly the same. Is this the way someone who has the right to drink, vote, get married and have kids should act to the death of a fat cartoon plumber who's just been hit by a turtle with a boomerang? Probably not. 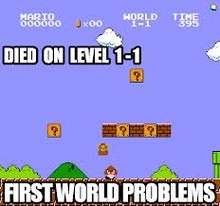 I've always identified as a “nerd” or “geek” sort of character (these are in inverted commas because the last time I looked everyone was claiming to be one of these). My reasoning behind this is that I always did well at School, and had the relevant interests to go with the terms. I've got a degree in Film and Television, made plenty of my own short films, and have what has been described as an encyclopedic knowledge of music. One thing that has occurred to me as I've gotten older is that these hobbies have enabled me to diversify my tastes. Instead of rocking out to Slipknot and watching gore fests by Tarantino, I find I've mellowed and will listen to something more chilled out like Pink Floyd and watch Coen Brother comedies. Gaming, or more specifically Triple A gaming hasn't really branched out like this..

Being an 80's child, I have probably been part of one of the first generations to grow up with video gaming. I don't really have older peers with the same hobby, and internally this makes me question its validity. If a 40 year old asked me what I did with my spare time, I would probably cringe whilst I mentioned video gaming if I mentioned it at all. Financially its quite an expensive past time as well.
To prepare myself for the Next Gen last year I spent a good few hundred pounds on the Wii U and PS4. Whilst it wont be as bad this year I know I'll be buying at least five games between now and Christmas (Destiny, Fifa 15, Bayonetta 2, Smash Bros and WWE 2K15 in case you were wondering). Whilst I wont spend a lot the rest of the year round it costs a lot more than a subscription to netflix or a few books.

Whilst I don't have children yet, I would imagine I will in the next 2-3 years. As well as the obvious amount of time I will spend looking after said offspring, morally I have to ask myself will it set a bad example if I spend my hours playing Call of Duty 13 Modern Underwater Black Ops. Is this the most productive way I can be spending my free time. It doesn't really add anything to my days. I sadly look down at my expanding waistband. Shouldn't I be exercising or something?

Essentially the gist of video games is to sit in front of a screen pressing buttons to complete trivial tasks. When I look back at my life is this part of the legacy I want to leave beside. That I was a man trapped in a state of arrested development chucking his toys out the pram, because that bastard blue shell got him just before the finish line! Is it a case as in the lines of the immortal Pink Floyd that I am going to “fritter and waste my hours in an offhand way”?

But surely there are positives right. I mean I read about the arguments that video games are a form of art, and I can see in some titles that there is a maturity that constitutes as art and this appeals to me as I get older. While the kind of games that we get from the Triple A industry don't really seem to be diversifying, titles like destiny look like they want to offer something new. The idea of multi user sections excite me because they are an experience I haven't yet had in online multiplayer. I've played multiplayer COD and Halo with friends, but its always been a competitive us vs them situation, and I have to say I like the idea of being thrown in with random strangers to complete a quest. And of course
The Last of Us shows that there is still plenty of room for story and innovation within the shooter genre.

Indie games are currently providing new experiences as well. In the past few months games like Octodad, Stick it to the man, and Hotline Miami have been some of my most played titles. I would say that my PS Plus subscription has hands down been the most exciting thing about the PS4 so far. It reminds me of the days where putting in a cartridge would guarantee you a new experience. Just looking at my list of upcoming purchases I've noticed that 4 of the 5 are sequels. Octodad: Dadliest Catch may be a sequel but it's got more originality in it's leftmost tentacle than most big games.

Compared to other media forms which I consume, Video Games seem to me to be a more cerebral experience to use. You do not sit back passively and let the game wash over you, you actively take part, thinking and planning what you're going to do next. I can remember being told as a youngster that I shouldn't play Beat-em-ups because they were mindless violence. When you factor in the amount of buttons sequences you need to learn, the timings, the strategies and other deciding factors such as what your opponent is doing at any given moment, there are so many choices which you are actively making, that it's a no brainer in being more actively engaging than other forms of entertainment.

As a new medium video games are really exciting to read about. Whilst there have been countless discussions about the meanings and representations of characters in books and TV, it is only recently that we have started to look in depth into these things within video games. Over the past month
I've seen articles dealing with important topics such as feminism, race and mental health and plenty more, and it's fascinating to see that gaming is being looked at in terms of these. Admittedly a lot of the criticism that some of these writers have been getting recently is disgusting, but unfortunately there will always be bell ends. The important thing is that a lot of exciting and innovative writing is out there these days.

It's for this reason that I've decided to start writing this blog. Not only to be doing something productive and creative with regards to gaming, but to be part of the conversation. It's been exciting to read other peoples writing, and now I feel I want to contribute myself. I'm looking back and realise that I've been rambling quite a bit and some of it's a bit serious. Thanks for taking the time to read this, and sorry for the poor spacing.  Next time I'll try to be a bit more focused and talk more about guts and tits and all that fantastic stuff. Maybe I'll try that game about fucking pigeons.