RandomWolf2: This series is going to last this time!

3:39 PM on 01.04.2011 (server time)    0
An explanation
Or, why this atrocity exists
Hey, does anybody remember my "Friday Funtime/ Saturday/Sunday 'Stravaganza? After doing those for a while, I realized that I never did anything interesting, nobody played the flash games, and you guys just came for the trivia, so I stopped those. Better yet, how about TheShelteredGamer? That series only lasted for one blog, and being one of my first, that blog wasn't very good. Well, forget about those, because now I've got a series that is here to stay! (Unless I get bored.) It's a pretty novel concept, really. Every once in a while, I'll post a blog where I talk about whatever comes to mind, kinda like Occam's Thoughts or Shoot the Breeze, except it's me! Now is that creative, or what? Sarcasm aside, I've been considering this for a while. I've been posting my random thoughts on Twitter (subscribe now and get $5 off your next hooker!), for quite some time now, but due to character limits, I haven't been able to fully express my thoughts. So, without further ado, here is one of the most godawful random stuff blogs you'll read in a long time.

Bit.Trip RUNNER
Or, runnin' down a dream 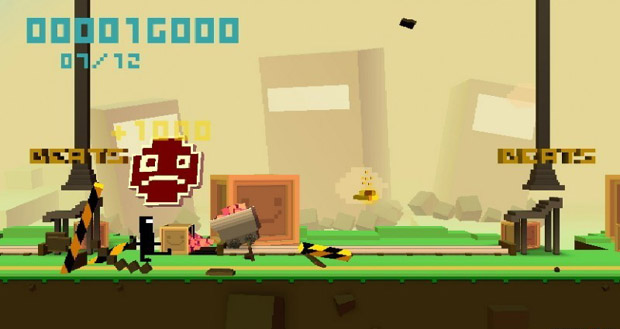 Now, Bit.Trip seems to be pretty popular with many people here at Dtoid, so I decided to buy one of the games. Even though I had played and loved the FATE demo, I chose to buy RUNNER for some reason. I do not regret that decision one bit. I don't even know where to begin about this game. The graphics, while not especially powerful, are whimsical and attractive, the gameplay is great, and the music, oh, the music! Never have I died and it has been anyone's fault but mine (scratch that, it's very easy for people to get me distracted during gameplay), and at the event of death, the wait to begin again is so short, it's never discouraging. This low penalty for failure was one of the few things that kept me from flipping out when I came upon a hard level. It's truly an awesome experience to watch your skill grow so quickly right before your eyes. There's nothing like repeatedly failing to climb a flight of stairs, but after working on it for some time, ascend them perfectly. It's like being a cripple going through physical therapy.

Anamanaguchi
Or, Rex has a new favorite band

(The subtitle might be a tad hyperbolic) After a Bit. of time with RUNNER, I, on a whim, decided to see if the soundtrack was available on Zune. It was. After listening, there were two tracks that stood out for me: "Blackout City" and "Mermaid," both of which were credited to Anamanaguchi. I looked up the band, and discovered that they also did the soundtrack for the Scott Pilgrim game. I had played the demo, and I loved the music, so I downloaded that, too. For me, their songs have the ability to trigger multiple eargasms. A blend of chiptune (using a hacked NES) and real instruments, they're not quite like anything I've heard before. Check out their music, it's fuckin' awesome!

That subtitle was a bit cheesier than I intended. Tweeting with other Dtoiders is pretty fun to do, and if you aren't on Twitter, you should fix that now. Be warned, though: it's addicting! Since I don't do FNFs or NARPs, it's my main method of connecting with the Dtoid army outside of the comment section. From video games to music to cartoons to whatever the hell else is going on, I've conversed about it on Twitter. Also, I've gotten great recommendations for all sorts of things on there, stuff like:
-Cave Story: One of my new favorite games ever, my purchase was mostly due to encouragement from @CaptPenguin (Law)
-After reading a tweet from @SteezyXL, mentioning how great it was, I've been watching through the entire series of Avatar: The Last Airbender with my brother. Great cartoon. If you only watch one cartoon about a bald monk-boy who is destined to save the world, make it this one.
[email protected]Tee_Ball_Bat, better known as Occams, suggested that I buy River City Ransom, and I've been having quite a good time playing it.
-Also, he got "Pet Sematary" by the Ramones stuck in my head. Goddammit, Occams.
-And there's probably more stuff, but I forgot about it!

Moving on, my time on Twitter has led to huge growth in my frienemyship with @RobotSnake, known around these parts as HandsomeBeast, and growth in my feeling of community and regular non-competitive friendship with the rest of the guys.

Welcoming New Friends
Or, IT'S DANGEROUS TO GO ALONE!

Introduction blogs and welcomes are one of the most important parts of the community, because they can often determine a new member's entire attitude about the site, the community, and the percepted quality of their blogs. When I came in, I wrote a fairly horrendously formatted introduction, and you fellas accepted me with open arms. Determined to make more people feel the same way I did, I started welcoming people, soon developing my own style of introduction, which is a bit difficult to keep up, seeing as I do most of my browsing and commenting by Zune. The first few weeks I was here, I felt and still feel a sense of comradery with the people who came in not long after myself, especially Talia and HandsomeBeast. There are few things more satisfying to me than helping out a new guy and giving them a happy entrance to the beauty that is the Dtoid community. One-sentence guys get one chance, though. After that, no mercy!

So, to recap: I adore Bit.Trip, Anamanaguchi is fabulous, Twitter is a helluva good time, reach out a helping hand to new guys, and I Love Toy Trains.