RandomWolf2 has missed you all so much.

Rambling with roses
Or, sorry, but the only roses I could find came with an odd woman. 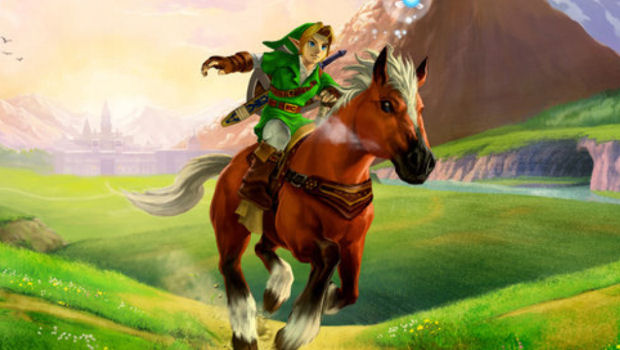 What can I say about this game? It's excellent. The new visuals and 3D effect truly work wonders. The big skultullas actually look more like spiders now, Link is looking snazzy, and the Goron Ruby floating out of the screen and rotating is something I could watch for ages. Ages. What really impressed me was the boss fight with Barinade. Previously a forgettable boss, at least to me, the anemone thing is exhilarating to fight in 3D, what with electricity flying at you and the thing spinning all around the room. Finally, Dead Hand is still scary as hell.

Anime Mania!
Or, be prepared for a deluge of mini-reviews.

Since my last blog, I have watched a lot of anime. A lot. So now I'll review a few of the things that I watched, starting with...

What can I say about this show? It may be one of the most certifiably insane amines I have yet seen, second only to Bobobo-Bo Bo-Bobo, which may overdo the insanity a slight bit too much. One never knows the entirety of what is going on in this show, and I love it. It's not every day that you see robots come out of somebody's forehead, y'know. Hell, they even acknowledge in one of the later episodes that nothing makes sense. Great show, you should watch.

Imagine Batman. Now imagine giant robots. Put them together, and you've got this show. With some pretty slick style and characters that I really like, The Big O is not bad at all. Giant robot battles galore in this show. However, the second season isn't as good as the first, and the end is a confusing jumble of things that nobody understands. Despite that, it's another good show.

What can I say? By the same guys as Baccano!, Durarara!! is a great anime, one of my very favorites. There are too many plot lines to sum up with one description, but expect color gangs, a headless biker, and much, much more. Like Baccano!, there are plenty of characters, but it's a bit different. The characters are deeper, but not as likeable. That's not a bad thing, though. There are still plenty of excellent characters, such as Simon the black Russian sushi chef, and Shizuo Heiwajima, who is strong. Oh so very, very strong. Seriously, you have no idea how strong he is. Also, watch out for all of the Baccano! references! Watch this anime NOW.

I think that I shall save the rest of my anime reviews for a later post. Instead, it is time for...

For Lack of a Better Kid (A)
Or, some techno music followed by "Computers having sex"

Coming from the lovely vApathyv, we have an album by Deadmau5, For Lack of a Better Name. I'm relatively new to this genre, so bear with me, men. First, let me say that this album starts out magnificently with "fml," exhibiting a sick "beat drop," as I am told the term is. (God, I sound like an old white guy trying to be "hip." (Damn, I did it again.)) After that come my two favorite songs, "Moar Ghosts N Stuff" and "Ghosts N Stuff." Moar Ghosts N Stuff starts out with amazing use of dialog from an old B (possibly C) movie, and stays excellent from there. Oh, the violins! Ghosts N Stuff continues, with some pretty good vocals to go along with the music. Sadly, after the following track (Hi Friend!), my interest in the music started to wane. The songs that followed simply weren't nearly as exciting to me, and my enjoyment suffered. That isn't to say that the songs were bad, though. The beginning four just gave ridiculously high expectations. The album does pick up again near the end, which pleases me.
Rex Rating: Quite excellent (For the first four: AMAZING)

Hoo boy. This next album, Kid A by Radiohead, is a bit of a debated subject here, at least between Occams and Law, the latter of which loves it. The former thinks that it sounds like computers doing the nasty. I'm somewhere in between. The main problem with the album is this: A focus on creating dissonance and using computer noises instead of making some goddamn simple music. Also, many of the songs seemed to lack purpose and drive. Several of them start out pretty well, only to fall prey to the general theme of the album. Funnily enough, the song that renewed my optimism halfway through was titled "Optimistic." That and "Idioteque" are the only songs that I can claim as favorites. They had drive and didn't fall prey to dissonance. Well, Idioteque did, but only near the end. Despite all of my slagging off on the album, it was alright. However, the final song is about six minutes or so long, most of which is silence. WHAT. THE. FUCK, Radiohead?
Rex Rating: Mixed bag. Pretty good but disappointing.

RANDOM
Or, everything you wanted to know about me, but was too short for its own area.

I love crispy hash browns. With a passion. A sweet, sweet passion.

Do you fellas know how hard it is to find good sushi where I go for vacation? I have to go to the *shudder* ...grocery store. It's not even worth it.

I watched Tron: Legacy yesterday, and it was pretty good. Cool special effects, but fairly unimpressive story, with a spoiler involvng a character that I saw miles away. Not bad for a movie of its type, but nothing amazing.

I just started Eden of the East. More shows need to start with naked amnesiacs holding guns in front of the White House. I'm liking it so far.

I've been reading a decent amount of manga recently, but my favorite of the ones I'm reading at the moment is Yostsuba&! (Yotsubato!). It follows an odd little girl, her father, and her neighbors. It's adorable, heartwarming and funny.

Like Xzyliac said in Commentoid, you should get a Twitter if you don't have one already. I consider Twitter to be one of the best parts of Dtoid. You know my music reviews and the anime I watched? Wouldn't have watched them and listened to it if I wasn't on Twitter.

It's good to be back.
#ShareonCommunityBlogs
Login to vote this up!